GET NEWS AND ARTICLES IN YOUR INBOXPrint
A
A
Home | Mises Library | Denmark: Potemkin Village 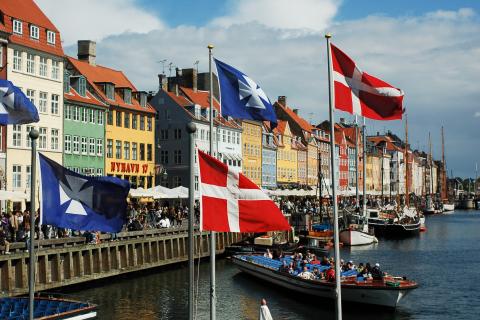 In the 1700s, the courtesans of Queen Catherine of Russia gave her tours along the Volga river where she witnessed a happy and thriving bourgeoisie living in clean and prosperous villages. But this was all a show to cover disease, poverty, and misery that lay just behind the facade that had been erected for her benefit.

This is the origin of the phrase Potemkin Village, a place where a politically generated appearance covers a less impressive underside.

Europe is today filled with Potemkin Villages, none as successful as Denmark. Denmark is often cited as an exemplary country within the EU, with an economic system that others should seek to emulate. In the comparisons of GDP per capita, Denmark ranks consistently in the top ten worldwide, and often in the top five.

But let us look at some other economic statistics that are not mentioned nearly as often.

When you recalculate these 2,214,000 people, of whom some receive only part-time government transfers, into people who live full-time on transfer income, the total becomes 1,590,000 people living off transfer payments.

Out of these 1,590,000 people, 710,000 are pensioners and the remaining approximately 900,000 are working-age people. Most of them cannot be found in the unemployment statistics. They are on other kinds of public transfer programs of which there exist ten different types.

There are approximately 1,900,000 people working in the private sector and 840,000 working in the public sector or publicly owned companies. (The reason the numbers do not add up to 4.2 million is because not all are full time workers.)

We can conclude from this that of the people in the working age of 18 to 66, more than one quarter live passively on government transfers (full time).  For every 100 persons employed full time in 1999, there were 33 working-age people receiving support. Adding pensioners, the total number was 61 people on full time transfer income for each 100 full time employed persons. (The pensioners are financed by a pay-as-you-go pension scheme). And out of those who are employed, 31.5 percent work for the government.

All of this, of course, needs to be financed. Denmark has therefore for many years had a very high and continuously increasing tax level.

A sales tax of 25 percent hits just about everything.

The capital gains tax is 59.7 percent for a private person in the high income tax bracket, unless you hold your investment for more than 3 years. It then falls to 44.8 percent.

There are additional taxes on "sinful" and "luxury" products likes cigarettes, alcohol, candy, soft drinks, electronic goods, and other luxuries.

For cars, there is a 180 percent special tax on top of the sales tax of 25 percent. Then there is a registration fee and a weight fee to be paid twice per year for the privilege of using the roads. The price of gasoline is nearly three times as high as it is in the US.

Denmark imposes many new green taxes. These are the taxes that have increased most substantially during the 1990s. These taxes hit heating, electricity, water, and gasoline.

Real estate, which is already heavily taxed, has been the target of new taxes throughout the 1990s. In addition, the tax value of deductions have been continuously reduced.

With Denmark, as with all of Europe, your perception of its economic status depends on which statistics you are looking at. Also, your judgement of its economic status depends on your preferences (is stability alone to be valued, or is freedom also important?) and your time horizon (does it matter that all these taxes make Denmark far less prosperous than it otherwise would be?).

Danish politicians proudly proclaims that Denmark is the most egalitarian country in the world. They may be right. The obsession with equality delivers a crushing, daily blow to anyone with a new idea or the inkling to cultivate an ability that surpasses the norm. Young people have virtually no chance to improve their lot in life, to take risks, to make it big through innovation and entrepreneurship.

Excellent and hard work are not rewarded by a system that systematically levels the population into a huge homogenous middle class, whose standard of living advances only incrementally and in ways that flout economic priorities. A total tax level that approaches 70 percent is a relentless and debilitating reminder that this country desires no personal economic achievement and no accumulation of wealth.

And yet many people seem to be happy with this system, somewhat like the masses of Huxley's Brave New World. Of course it sets up a dynamic that harms everyone in the long run, but people don't seem to understand or care about this. Equality and stability are regarded as more important than progress and freedom.

A heritage of honesty and hard work are marvelous tools for papering over the failures of welfarism and subtle servitude. With the right attitude, even a prison population can settle into a comfortable and egalitarian existence, one that might even impress Queen Catherine passing by on a boat. But lacking energy, enterprise, entrepreneurship, and freedom, such systems of economic control exact a huge toll with the passage of time.

Per Henrik Hansen works at Danmark's National bank and teaches economics at the Copenhagen Business School.