GET NEWS AND ARTICLES IN YOUR INBOXPrint
A
A
Home | Mises Library | Is Deleveraging Bad for the Economy?

Is Deleveraging Bad for the Economy? The economic pundits have stressed more and more that this crisis is special because it involves "deleveraging," and for that reason isn't a run-of-the-mill recession. Because households and corporations are collectively trying to reduce their net indebtedness, it is allegedly up to the government to run massive budget deficits in order to prop up aggregate spending.

In the Austrian view, such analyses are nonsense. According to canonical Austrian business-cycle theory (which can easily explain the housing boom and our current mess), people engaged in misdirected investments and overconsumption during the boom years. The proper remedy, therefore, is for the community to live below its means during the recession — to save more and heal the mistakes made during the boom. By piling up massive debts for the taxpayers, governments simply thwart this corrective process and make the recession last longer.

The Mainstream Analysis of Deleveraging

A recent article from Time/CNN, relying on a research paper put out by McKinsey, lays out the standard (Keynesian) analysis of our current situation:

The U.S. appears to be the only developed country where the overall debt level is falling.…

Of course, the reason our overall level of debt has been falling is because of individuals and not government. Government debt is continuing to rise. Private household debt has been falling, in large part because people have been losing those households, and the debt that goes with them. Consumers have also reined in spending and are now saving at the highest level in years. And that is one of the reasons that the economic recovery has been slower than expected.

Darn those self-centered households! If people would just go to the mall and blow their paychecks already, we could get this economy back on its feet.

This type of analysis is so pervasive that the people in the financial press probably don't even realize they are siding with the Keynesians as opposed to (say) the Austrians.

"If people would just go to the mall and blow their paychecks already, we could get this economy back on its feet."

This preoccupation with consumer spending as the key to economic growth is why forecasters cheer when households spend more on consumption and when they increase their credit-card debt, even though on the face of it these would hardly seem to be responsible things to do in the middle of an awful recession. The Keynesian mindset also explains why, during debates over government "stimulus," analysts worry that tax cuts would simply be saved (and therefore would be a complete waste in terms of helping the economy).

Alas, even though the Keynesians tell us that all would be fine if people would just stop saving so much, this is a free country after all. Thus far, nobody has proposed forcing people to go out and buy new plasma-screen TVs. Instead, the pundits call for governments to spend the (borrowed) money in order to maintain aggregate demand. They think this prescription is a matter of simple arithmetic: if the private sector is (on net) reducing its indebtedness, then the only way to keep total incomes from falling is for the government to step in and increase its indebtedness.

Saving Is Good in a Recession

It is certainly true that households have been reducing their indebtedness since the crisis began, as the following chart shows: 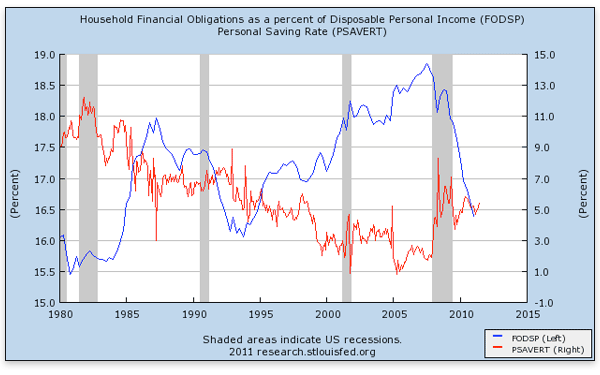 Another way of gauging the shift is to look at household financial obligations as a percentage of personal disposable income (blue line, left axis). That rose during the housing bubble years and has fallen like a rock since the bust set in.

Contrary to Keynesian warnings about the fallacy of composition, in this situation what is good for the individual household is also good for the economy as a whole. When a family has lived beyond its means for years, running up credit-card and other debt, then the solution is to cut discretionary spending and pay down the debt. (Selling off assets and seeking other forms of income are also great ideas.)

According to Austrian business-cycle theory, the boom period is unsustainable because artificially low interest rates (fueled by Fed inflation) lead entrepreneurs to invest in long-term production processes even though there aren't sufficient real savings to complete them. In other words, when Alan Greenspan cut the federal-funds rate from 6.5 percent in 2000 down to 1 percent by 2003, people responded as if there had been more saving on the part of households. This partially explains the huge upswing in the housing boom.

But when Greenspan added a bunch of zeroes to commercial bank balances, he didn't actually create more roof shingles, lumber, floor tiles, and so forth. As the economy adapted to the artificially low interest rates, the structure of production evolved into an unsustainable configuration. Because of capital consumption, Americans (and others around the world) persisted in delusion for several years, thinking they were enjoying prosperity. But in reality, they were eating the seed corn. (In my "sushi article" I give a simple fable to illustrate the process, while Roger Garrison's PowerPoint show on unsustainable growth provides a more technical explanation of the Austrian theory.)

In this context, households can partially justify some of the investments of the boom years by saving more. In other words, if people had actually begun saving a much higher fraction of their incomes starting in the year 2000, then (other things equal) interest rates would have dropped due to market forces. Even in the absence of any prodding from Alan Greenspan, resources would have been freed up from making consumer goods (TVs, video games, steak dinners) and could have been diverted into making producer goods (tractor trailers, tools and equipment). The higher investment spending in various sectors would have been sustainable because consumption (in the short term) would have gone down.

To repeat, households can at least mitigate the mistaken investments of the boom years by saving more now. The economy will be brought closer to the configuration that it should have had, to justify the low interest rates spawned by the Fed (under Greenspan and now Bernanke).

None of this analysis implies that households ought to "take one for the team" and save a higher fraction of income than they individually consider desirable. The point is that once we take seriously the Austrian conception of a long-term capital structure of production — as opposed to Keynesian aggregates, which reduce the entire economy to numbers labeled C and I — then it becomes clear that increased saving helps during a recession. It is the macro analog of the beneficial (long-term) effects that increased saving has on a household at the micro level, when that household realizes it has dug itself into a hole through reckless spending.

If households are trying to save and pay down their debts — and we have seen that this is actually good for the economic recovery — then it obviously follows that government deficits only prolong the agony. For one thing, to the extent that each household takes into account future tax obligations to service the government debt, private efforts at saving are offset by government borrowing. In other words, it saps the sweetness of paying down your American Express balance by $5,000 if your portion of the federal debt goes up by $3,000 during the same period. If Keynesians want households to stop saving so much and resume "normal" consumer expenditures, they should tell the government to stop piling more debt onto the backs of the taxpayers.

Another important consideration is that government spending is not nearly as productive as private spending. Government deficits allow more resources to be siphoned out of the private sector and diverted to political channels. This is always a bad thing, but particularly so during a recession when the economy is already "sick" and trying to recover from previous malinvestments.

Finally, what of Paul Krugman's point that total incomes necessarily fall if the economy as a whole (including private and government) saves? Well, so what? There is nothing magical about the nominal level of income; what matters is what people can buy with their paychecks. If massive deleveraging causes total income — measured in absolute dollars — to fall, then equilibrium will be restored only when product prices fall too.

The real problem isn't the adjustment, but the preceding boom period in which wages and prices were bid up to unrealistic heights. It's true that falling incomes will make it harder for debtors to pay down their debts, but that observation doesn't negate the need for paying down debts. It is foolish to prop up unsustainable prices — whether of certain salaries or homes — for years on end, rather than facing the necessary liquidation process.

Back in the fall of 2008, when the extraordinary budget deficits and monetary expansions began in earnest, policymakers warned the public of how awful the economy would become if they "did nothing." Trillions of dollars later, the economy is still pretty awful, especially from the perspective of lower- and middle-income households.

Deleveraging — a fancy word for paying down debt — is a painful process, but necessary given the extravagant living of the boom period. Rather than fight it, the government and Fed should get out of the way. They certainly shouldn't implement policies — such as zero-percent interest rates and trillion-dollar deficits — that will only build up the problem once again.