GET NEWS AND ARTICLES IN YOUR INBOXPrint
A
A
Home | Mises Library | Delete the State: A Challenge to Minarchists

Delete the State: A Challenge to Minarchists 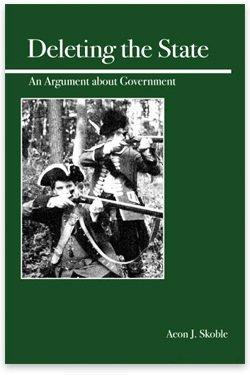 Aeon Skoble's excellent book1 poses a fundamental challenge to minimal-state libertarians. All libertarians take freedom to be the highest political value and oppose coercion. Why, then, do some libertarians reject anarchism? Under anarchism, people freely choose their own protection agency; but the minarchist variety of libertarianism forbids them to do so, so long as they remain on the territory controlled by the minimal state. How can libertarians justify coercing people in this way?

Skoble finds the answer in what he calls the "Hobbesian Fear." Hobbes famously argued that people in a state of nature could not trust one another to keep agreements to refrain from force. In a state of perpetual war (including both actual fighting and readiness to fight) life would be "solitary, poor, nasty, brutish, and short." To escape this fate, it would be rational for everyone to surrender his arms to a sovereign, who would then have the power to assure that people kept their agreements. In this circumstance, people could benefit from society. Hobbes did not welcome the loss of liberty as a good in itself, but he argued that only by the drastic surrender of liberty he specified could the peace be preserved.

Libertarians of course reject Hobbes's Leviathan. Nevertheless, Skoble thinks, minarchists in part embrace the Hobbesian Fear. They do not think that people, or the protection agencies that they designate to enforce their rights, would be able to come to peaceful agreement, in the absence of a monopoly state. Hence they think it necessary to allow more coercion than would be ideally desirable. No doubt it is bad that people cannot always be defended by the protection agency of their choice; but this sacrifice of freedom is necessary for the existence of society.

Has Skoble accurately diagnosed the motivations of minimal statists? He endeavors to support his contention through an analysis of three noted libertarian philosophers: Robert Nozick, Tibor Machan, and Jan Narveson. As Skoble points out, Narveson abandoned statism after the publication of The Libertarian Idea; and even there, he displayed considerable dissatisfaction with the state. Nevertheless, Skoble rightly thinks it important to examine the contractarian argument for the state presented in that book.

His account of Nozick seems to me not fully to have grasped the elusive argument of Part I of Anarchy, State, and Utopia. Skoble maintains that Nozick favors the minimal state on grounds of efficiency. Competing protection agencies would fear preemptive attacks by other agencies. To prevent this outcome, a dominant agency would be justified in forcing everyone in the territory it controls to make use of its services. Not only could the dominant agency legitimately forbid competition; it could compel even those who would prefer a different agency to pay for its protective services.

Taken this way, Nozick's account makes use of just the Hobbesian Fear that Skoble has postulated. But Nozick does not say that the dominant agency can compel those who prefer other agencies to join it. Neither can it compel people to pay for its protective services. Further, although Nozick does discuss preemptive attacks, he does not at all assume that agencies will fear such attacks by other agencies.

Skoble himself quotes a passage from Nozick that appears to undermine his thesis.

[But we] have rebutted the charge we imagined earlier that our argument fails because it "proves" too much in that it provides a rationale not only for the permissible rise of a dominant protective association, but also for the association's forcing someone not to take his patronage elsewhere or for some person's forcing someone not to join any association. Our argument provides no rationale for the latter actions and cannot be used to defend them (p. 68, emphasis removed, quoting Nozick, Anarchy, State, and Utopia, p. 129.)

Faced with this passage, how can Skoble maintain his interpretation of Nozick? He responds in this way:

If the argument does not provide a justification for the dominant protective association forbidding individuals from opting out, then Nozick has no argument for the state beyond that one could arise without violating anyone's rights. However, he views the development as more than simply a logical possibility … he must believe that no competitive set of such agencies could be fair and feasible. (pp. 68–9)

Skoble has allowed his conception of what a minimal statist must believe to govern his interpretation of Nozick. In Nozick's system, the dominant agency can successfully forbid other agencies from imposing risky decision procedures on its clients. Because in doing so it disadvantages these independents, it must provide them with low cost or free protective services. These features, in Nozick's view, suffice to make the dominant agency a minimal state. If Skoble does not agree that this is enough for a state, he may well be right; but that is Nozick's contention. He does not say, as Skoble thinks, that preservation of society necessitates rights-violating coercion.

Even if I am right about Nozick, though, does not Skoble still have a good point? The reason Nozick thinks that the dominant agency can prohibit risky decision procedures is that knowledge that these procedures may be applied evokes fear. Do we not have here a type of Hobbesian Fear?

But this is just the crucial point. In Skoble's framework, Hobbesian Fear leads libertarians to accept coercion they would otherwise deem unjustified. Nozick does not think this: he thinks that the dominant agency acts perfectly within its rights in forbidding risky decision procedures to its clients. Skoble, if I have understood him, thinks that the dominant agency can de facto shut down all competing agencies by declaring their decision procedures unacceptably risky. But this is not correct: the dominant agency cannot forbid other agencies from applying such procedures to nonclients. Nozick does not contend that agencies would be unable, without a minimal state, peacefully to resolve their differences about decision procedures: he thinks that they are under no obligation to do so. Skoble misses this when he says,

Do we have any reason to think that companies would seek this (co-operative) type of solution, rather than resorting to violent conflict? … Nozick can only rule out this possibility by appeal to a Hobbesian Fear. (p. 69)

Skoble's schema also does not fully fit Tibor Machan's argument. Machan does raise an objection to competing protection agencies that supports Skoble's analysis. Machan envisions a situation in which an agency convicts a client of another agency of a crime. What then happens? If Machan considers this a difficulty for anarchism, must he not think that the agencies would find it difficult, if not impossible, to reach agreement? If so, does he not favor a single protection agency in a given territory on grounds of efficiency, precisely as Skoble's model suggests?

Machan does indeed raise the problem of competing agencies, but he does not handle it in the way that Skoble's account would suggest. He does not argue that because competing agencies would find agreement difficult in this type of case, a monopoly state therefore may out of necessity restrict rights. Quite the contrary, his contention is that a protection agency of the type he supports violates no one's rights. It is not a matter of surrendering rights out of necessity, as Skoble would have it.

My objection to Skoble can be clarified if one considers how a supporter of Robert LeFevre might evoke the Hobbesian Fear against standard libertarian anarchism. He might claim that conventional anarchists allow the use or threat of force in defense of property. Such concessions to necessity, he would say, rest on a quasi-Hobbesian view that society could not function without such reliance on force. Only a system that renounces force altogether, as described e.g., in LeFevre's book This Bread Is Mine, qualifies as fully libertarian.

Would not the response of the standard anarchist be obvious? People who use force in the indicated circumstances have not violated any rights: the standard anarchist does not agree with LeFevre's contrary position. In like fashion, the minarchist does not, I suggest, normally view himself as compromising rights. He thinks that his system accords with rights. Skoble of course disagrees, and I think he is correct to do so; but, once more, it does not follow that, from his own point of view, the minarchist accepts violations of rights.

That said, Skoble's discussion of the Hobbesian Fear is of great value. Many people do dismiss libertarian anarchism just because they think that it would lead to chaos. Skoble argues that the Hobbesian Fear lacks adequate grounds: people can resolve disputes without a monopoly state.

Like many libertarians, Skoble adduces historical examples of societies without a state, Iceland, Ireland, and the American West chief among them. But he does not stop with this. He confronts the Hobbesian Fear on its own ground of theory.

The Hobbesian argument may be put in this way. A group of people may recognize that if all of them refrained from initiating violence, they would all be better off. No longer would life be nasty, brutish, and short: people could now live peacefully. Unfortunately, this recognition will fail to generate the required agreement. Each person will also recognize that he would be still better off if he himself resorted to violence whenever he deemed it advantageous. If others keep their agreement, so much the better, and if they do not, one clearly is worse off by being the sole person to observe the agreement. Of course, everyone will reason in the same fashion and no one will keep the agreement. In brief, we have here a classic Prisoner's Dilemma.

Skoble brings to bear important work by Robert Axelrod and later writers that undercuts the analysis just presented. The argument that keeping the agreement, despite its recognized advantages to the group, is irrational applies only in a special case. If people do not expect to have further dealings with one another, then defection is the rational course. But people in a society do not find themselves in such a "one-shot Prisoner's Dilemma." Quite the contrary, they must deal with one another repeatedly. In such an "iterated Prisoner's Dilemma," cooperation, not defection is rational.2

[D]efecting is the dominant strategy, only if you play the game just once. It is not the dominant strategy, the research [of Axelrod and later writers such as Martin Nowak and Karl Sigmund] shows, if you play the game in series, that is, over and over again. It turns out in that case that the most effective strategy is responsive cooperation… (p. 63)

Objections can no doubt be raised to this argument; e.g., can one directly apply the argument for cooperation to a situation where actors do not repeatedly confront identical payoffs? But Skoble's argument is immensely suggestive. The assumption that people need a state to survive as a society must confront a powerful challenge.

The book contains much else, e.g., excellent discussions of how a libertarian anarchist society would handle disasters and whether disagreements between libertarians and advocates of other political views are "incommensurable." But I have thought it best to concentrate on Skoble's central argument. Deleting the State is an outstanding contribution to libertarian political theory.