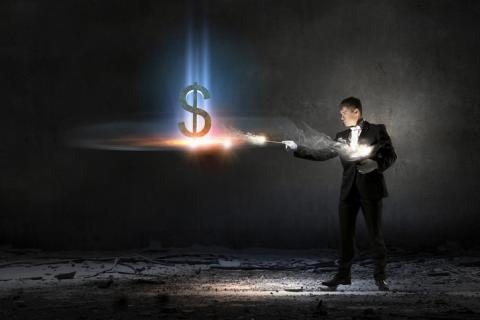 I assume that you know how the banking system developed and how the banks could improve the services rendered by gold, by transferring assets from one individual to another individual in the books of the banks. When you study the development of the history of money you will discover that there were countries in which there were systems in which all the payments were made by transactions in the books of a bank, or of several banks. The individuals acquired an account by paying gold into this bank. There is a limited quantity of gold, so the payments which are made are limited. And it was possible to transfer gold from the account of one man to the account of another.

But then the governments began something which I can only describe in general words. The governments began to issue paper, which they wanted to serve the role, perform the service, of money. When people bought something they expected to receive from their bank a certain quantity of gold to pay for it. But the government asked, What's the difference whether the people really get gold or whether they get a title from the bank that gives them the right to ask for gold? It will be all the same to them.

Not too long ago, our government proclaimed a new method for making everybody prosperous: a method called "deficit financing." Now that is a wonderful word. You know, technical terms have the bad habit of not being understood by people.

The government and the journalists who were writing for the government told us about this "deficit spending." It was wonderful! It was considered something that would improve conditions in the whole country. But if you translate this into more common language, the language of the uneducated, then you would say "printed money." The government says this is only due to your lack of education; if you had an education you wouldn't say "printed money;" you would call it "deficit financing" or "deficit spending."

If the government wants to pay out more money than before, if it wants to buy more commodities for some purpose or to raise the salaries of government employees, no other way is open to it under normal conditions than to collect more taxes and use this increased income to pay, for instance, for the higher wages of its employees. The fact that people have to pay higher taxes so that the government may pay higher wages to its employees means that individual taxpayers are forced to restrict their expenditures.

On the other hand, if the government does not raise taxes, does not increase its normal revenues, but prints an additional quantity of money and distributes it to government employees, additional buyers appear on the market. The number of buyers is increased as a result, while the quantity of goods offered for sale remains the same. Prices necessarily go up, because there are more people with more money asking for commodities which had not increased in supply.

The best proof that inflation, the increase in the quantity of money, is very bad is the fact that those who are making the inflation are denying again and again, with the greatest fervor, that they are responsible. "Inflation?" they ask. "Oh! This is what you are doing because you are asking higher prices. We don't know why prices are going up. There are bad people who are making the prices go up. But not the government!"

The situation, the political situation, the discussion of the problem of inflation, would be very different if the people who are making the inflation, the government, were openly saying, "Yes, we do it. We are making the inflation. Unfortunately we have to spend more than people are prepared to pay in taxes." But they don't say this. They do not even say openly to everybody, "We have increased the quantity of money. We are increasing the quantity of money because we are spending more, more than you are paying us." And this leads us to a problem which is purely political:

Those into whose pockets the additional money goes first profit from the situation, whereas others are compelled to restrict their expenditures. The government does not acknowledge this; it does not say, "We have increased the quantity of money and, therefore, prices are going up." The government starts by saying, "Prices are going up. Why? Because people are bad. It is the duty of the government to prevent bad people from bringing about this upward movement of prices, this inflation. Who can do this? The government!"

Inflation is a considerable addition to the quantity of money in circulation.… And this system can work for some time, but only if there is some power that restricts the government's wish to expand the quantity of money and is powerful enough to succeed to some extent in this regard. The evils which the government, its helpers, its committees, and so on, acknowledge are connected with this inflation, but not in the way in which they are discussed.

This shows that the intention of the governments … is to conceal the real cause of what is happening. If we want to have a money that is acceptable on the market as the medium of exchange, it must be something that cannot be increased with a profit by anybody, whether government or a citizen. The worst failures of money, the worst things done to money, were not done by criminals but by governments, which very often ought to be considered, by and large, as ignoramuses but not as criminals.

Excerpted from Ludwig von Mises on Money and Inflation: A Synthesis of Several Lectures, compiled by Bettina Bien Greaves. This lecture was given at the Foundation for Economic Education (FEE).