The Decline of Scholasticism 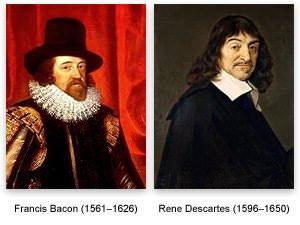 Bacon and Descartes agreed on one crucial and destructive point: the severing of reason and thought from empirical data.

Sixteenth-century Spain has well been called the Indian summer of Scholasticism. After that, its decline, not only in Spain but throughout Europe, was rapid. Part of the reason was a stubborn clinging to the form of the prohibition of usury. A ban that had made little sense, either by natural or divine law, and which entered Christian thought quite late in the day, was clung to and strengthened in an almost perpetual, irrational frenzy.

The systematic weakening of the usury ban by some of the finest minds in Christendom had the beneficial effect of sanctioning the charging of interest, but at the long-run cost of discrediting the Scholastic method itself. By clinging to the outer husk of banning usury as a mortal sin, while at the same time finding increasingly sophisticated ways of allowing merchants and finally professional moneylenders to get around the ban, the Scholastics opened themselves to unfair charges of evasion and hypocrisy.

The deadly assault on Scholasticism came from two contrasting but allied camps. One was the rising groups of Protestants without, and crypto-Calvinists within, the Church who denounced it for its alleged decadence and moral laxity.

Protestantism, after all, was in large part a drive to cast off the sophisticated trappings and the refined doctrine of the Church, and to go back to the alleged simplicity and moral purity of early Christianity. Made the very emblem of this hostility was the Jesuit Order, the devoted spearhead of the Counter-Reformation, that order which had taken up from the faltering Dominicans the torch of Thomism and Scholasticism.

The second camp of enemies of Scholasticism was the rising group of secularists and rationalists, men who might be Catholics or Protestants in their private lives but who mainly wanted to get rid of such alleged excrescences on modern life as the political application of religious principles or the prohibition of usury. Consequently, the crypto-Calvinists attacked the Jesuits for weakening the prohibition of usury, while the secularists attacked them for keeping it.

Neither wing of the opposition was impressed with the brilliance of the scholastic arguments to justify usury, nor with the entire Scholastic and Jesuit enterprise of "casuistry": that is, of applying moral principles, both natural and divine, to concrete problems of daily life.

One might think that the task of casuistry should be deemed an important and even noble one; if general moral principles exist, why shouldn't they be applied to daily life? But both sets of opponents rapidly succeeded in making the very word "casuistry" a smear term: for the one, a method of weaseling out of strict moral precepts; for the other, a method of imposing outdated and reactionary dogmas upon the world.

Why, despite the great work of Summenhart and others, did the Catholic Church persist in keeping the formal ban on usury for two centuries thereafter? Probably for the same reason that the Church has always tended to maintain stoutly that it never changes its doctrines while it keeps doing so.

Changing content within an unchanging formal shell has long been characteristic, not only of the Catholic Church, but of any long-lived bureaucratic institution, whether it be the Church or the constitutional interpretations of the Supreme Court of the United States.

"Changing content within an unchanging formal shell has long been characteristic, not only of the Catholic Church, but of any long-lived bureaucratic institution, whether it be the Church or the constitutional interpretations of the Supreme Court of the United States."

The two-pronged alliance against Scholasticism outside and within the Catholic Church cut far deeper than the quarrel over usury. At the root of Catholicism as a religion is that God can be approached or apprehended through all the faculties of man, not simply through faith but through reason and the senses. Protestantism, and especially Calvinism, sternly put God outside man's faculties, considering, for example, sensate embodiments of man's love for God in painting or sculpture as blasphemous idolatry to be destroyed in order to clear the path for the only proper communication with God: pure faith in revelation.

The Thomist stress on reason as a means of apprehending God's natural law and even aspects of divine law was reviled by a sole Protestant emphasis on faith in God's arbitrary will. While some Protestants adopted natural-law theories, the basic Protestant thrust was opposition to any natural-law attempts to derive ethics or political philosophy from the use of man's reason.

For Protestants, man was too inherently sinful and corrupt for his reason or his senses to be anything but an embodiment of corruption; only pure faith in God's arbitrary and revealed commands was permissible as a groundwork for human ethics. But this meant that for Protestants there was also very little natural-law groundwork from which to criticize actions of the state. Calvinism and even Lutheranism provided little or no defenses against the absolutist state that burgeoned throughout Europe during the 16th century and triumphed in the 17th century.

If Protestantism opened the way for the absolute state, the secularists of the 16th and 17th centuries embraced it. Shorn of natural-law critiques of the state, new secularists such as the Frenchman Jean Bodin embraced the state's positive law as the only possible criterion for politics. Just as the anti-Scholastic Protestants extolled God's arbitrary will as the foundation for ethics, so the new secularists raised the state's arbitrary will to the status of unchallengeable and absolute "sovereign."

On the deeper level of the question of how we know what we know, or "epistemology," Thomism and Scholasticism suffered from the contrasting but allied assaults by the champions of "reason" and "empiricism." In Thomist thought, reason and empiricism are not separated but allied and interwoven. Truth is built up by reason on a solid groundwork in empirically known reality. The rational and empirical were integrated into one coherent whole.

But in the first part of the 17th century, two contrasting philosophers managed between them the fatal sundering of the rational and the empirical that continues to plague the scientific method until the present day. These were the Englishman Francis Bacon (1561–1626) and the Frenchman Rene Descartes (1596–1650).

Descartes was the champion of a desiccated mathematical and absolutely certain "reason" divorced from empirical reality, while Bacon was the advocate of sifting endlessly and almost mindlessly through the empirical data. Both the distinguished English lawyer who rose to become Lord Chancellor (Lord Verulam), Viscount of the Realm, and corrupt judge, and the shy and wandering French aristocrat, agreed on one crucial and destructive point: the severing of reason and thought from empirical data. Hence, from Bacon there stemmed the English "empiricist" tradition, steeped mindlessly in incoherent data, and from Descartes the purely deductive and sometimes mathematical tradition of continental "rationalism." All this was of course an assault on natural law, which had long integrated the rational and the empirical.

"In Thomist thought, reason and empiricism are not separated but allied and interwoven. Truth is built up by reason on a solid groundwork in empirically known reality. The rational and empirical were integrated into one coherent whole."

As a corollary to, and intermingled with, this basic and systematic change in European thought in the "early modern" period (the 16th and especially 17th centuries) was a radical shift in the locus of intellectual activity away from the universities. The theologians and philosophers who wrote and thought on economics, law, and other disciplines of human action during the medieval and Renaissance periods were university professors. Paris, Bologna, Oxford, Salamanca, Rome, and many other universities were the milieu and arena for intellectual output and combat during these centuries. And even the Protestant universities in the early modern period continued to be centers of natural-law teaching.

But the major theorists and writers of the 17th and then the 18th centuries were almost none of them professors. They were pamphleteers, businessmen, wandering aristocrats such as Descartes, minor public officials such as John Locke, churchmen such as Bishop George Berkeley.

This shift of focus was greatly facilitated by the invention of printing, which made the publication of books and writings far less costly and created a much wider market for intellectual output. Printing was invented in the mid-15th century, and by the early 16th century it became possible, for the first time, to make a living as an independent writer, selling one's books to a commercial market.

This shift from university professors to private lay citizens meant, at least for that era, a move away from traditional modes of learning and thought towards a more diverse spectrum of idiosyncratic individual views. In a sense, this acceleration of diversity went hand in hand with one of the most important impacts of the Protestant Reformation on social and religious thought.

For, in the long run, far more important than such theological disputes as over free will versus predestination and over the significance of communion was the shattering of the unity of Christendom.

Luther and even Calvin had no intention of fragmenting Christendom; on the contrary, each set out to reform a unified Christian Church. But the consequence of their revolution was to open Pandora's box. Whereas frictions and heresies had before been either stamped out or accommodated within the Church, now Christianity split apart in literally hundreds of different sects, some quite bizarre, each propounding different theologies, ethics, and prescriptions for social life.

While the variegated strains of social thought stemming from this break within Christianity included rationalists and individualist groups such as the Levellers as well as absolutists, the value of the resulting diversity must be offset by the unfortunate fading away of Scholasticism and Thomism from Western thought.

The severing of the unity of European thought was intensified by the shift during these centuries of written literature from Latin to the vernacular in each country. During the Middle Ages, all intellectuals, jurists and theologians in Europe wrote in Latin, even though of course the spoken language in each country was the vernacular. This meant that for scholars and intellectuals there was only one language, and in a sense one country, so that Englishmen, Frenchmen, Germans, etc. could easily read and be influenced by each other's books and articles. Europe was truly one intellectual community.

In the Middle Ages, only Italian authors wrote, from time to time, in Italian as well as Latin. But the Protestant Reformation gave tremendous impetus toward the abandonment of Latin, since Protestants felt it vital for the Christian masses to read and study the Bible in language they could understand. Martin Luther's famous translation of the Bible into German, in the 16th century, inspired a rapid change towards writing in the national language. As a result, since the 16th and 17th centuries, economic, social, and religious thought began to be isolated in each national language. Later continuing influences of Scholastic economic thought became confined to writers in Catholic countries.