Cyprus and the Unraveling of Fractional-Reserve Banking 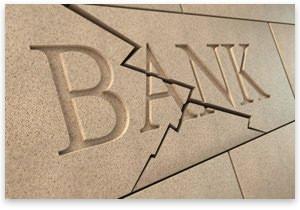 The “Cyprus deal” as it has been widely referred to in the media may mark the next to last act in the the slow motion collapse of fractional-reserve banking that began with the implosion of the savings-and-loan industry in the U.S. in the late 1980s.

This trend continued with the currency crises in Russia, Mexico, East Asia, and Argentina in the 1990s in which fractional-reserve banking played a decisive role. The unraveling of fractional-reserve banking became visible even to the average depositor during the financial meltdown of 2008 that ignited bank runs on some of the largest and most venerable financial institutions in the world. The final collapse was only averted by the multi-trillion dollar bailout of U.S. and foreign banks by the Federal Reserve.

Even more than the unprecedented financial crisis of 2008, however, recent events in Cyprus may have struck the mortal blow to fractional-reserve banking. For fractional-reserve banking can only exist for as long as the depositors have complete confidence that regardless of the financial woes that befall the bank entrusted with their “deposits,” they will always be able to withdraw them on demand at par in currency, the ultimate cash of any banking system.

Ever since World War Two governmental deposit insurance, backed up by the money-creating powers of the central bank, was seen as the unshakable guarantee that warranted such confidence. In effect, fractional-reserve banking was perceived as 100-percent banking by depositors, who acted as if their money was always “in the bank” thanks to the ability of central banks to conjure up money out of thin air (or in cyberspace).

Perversely the various crises involving fractional-reserve banking that struck time and again since the late 1980s only reinforced this belief among depositors, because troubled banks and thrift institutions were always bailed out with alacrity—especially the largest and least stable. Thus arose the “too-big-to-fail doctrine.” Under this doctrine, uninsured bank depositors and bondholders were generally made whole when large banks failed, because it was widely understood that the confidence in the entire banking system was a frail and evanescent thing that would break and completely dissipate as a result of the failure of even a single large institution.

Getting back to the Cyprus deal, admittedly it is hardly ideal from a free-market point of view. The solution in accord with free markets would not involve restricting deposit withdrawals, imposing fascistic capital controls on domestic residents and foreign investors, and dragooning taxpayers in the rest of the Eurozone into contributing to the bailout to the tune of 10 billion euros.

Nonetheless, the deal does convey a salutary message to bank depositors and creditors the world over. It does so by forcing previously untouchable senior bondholders and uninsured depositors in the Cypriot banks to bear part of the cost of the bailout. The bondholders of the two largest banks will be wiped out and it is reported that large depositors (i.e., those holding uninsured accounts exceeding 100,000 euros) at the Laiki Bank may also be completely wiped out, losing up to 4.2 billion euros, while large depositors at the Bank of Cyprus will lose between 30 and 60 percent of their deposits. Small depositors in both banks, who hold insured accounts of up to 100,000 euros, would retain the full value of their deposits.

The happy result will be that depositors, both insured and uninsured, in Europe and throughout the world will become much more cautious or even suspicious in dealing with fractional-reserve banks. They will be poised to grab their money and run at the slightest sign or rumor of instability. This will induce banks to radically alter the sources of the funds they raise to finance loans and investments, moving away from deposit and toward equity and bond financing. As was reported Tuesday, March 26, this is already expected by many analysts:

One potential spillover from the March 26 agreement is the knock-on effects for bank funding, analysts said. Banks typically fund themselves with some combination of deposits, equity, senior and subordinate notes and covered bonds, which are backed by a pool of high-quality assets that stay on the lender’s balance sheet.

The consequences of the Cyprus bailout could be that banks will be more likely to use contingent convertible bonds—known as CoCos—to raise money as their ability to encumber assets by issuing covered bonds reaches regulatory limits, said Chris Bowie at Ignis Asset Management Ltd. in London.

“We’d expect to see some deposit flight and a shift in funding towards a combination of covered bonds, real equity and quasi-equity,” said Bowie, who is head of credit portfolio management at Ignis, which oversees about $110 billion.

If this indeed occurs it will be a significant move toward a free-market financial system in which the radical mismatching of the maturities of assets and liabilities in the case of demand deposits is eliminated once and for all. A few more banking crises in the Eurozone—especially one in which insured depositors are made to participate in the so-called “bail-in”—will likely cause the faith in government deposit insurance to completely evaporate and with it confidence in the fractional-reserve banking system.

There may then naturally arise on the market a system in which equity, bonds, and genuine time deposits that cannot be redeemed before maturity become the exclusive sources of finance for bank loans and investments. Demand deposits, whether checkable or not, would be segregated in actual deposit banks which maintain 100-percent reserves and provide a range of payments systems from ATMs to debit cards.

While this conjecture may be overly optimistic, we are certainly a good deal closer to such an outcome today than we were before the “Cyprus deal” was struck. Of course we would be closer still if there were no bailout and the full brunt of the bank failures were borne solely by the creditors and depositors of the failed banks rather than partly by taxpayers. The latter solution would have completely and definitively exposed the true nature of fractional-reserve banking for all to see.