The Curse of Circulation Credit 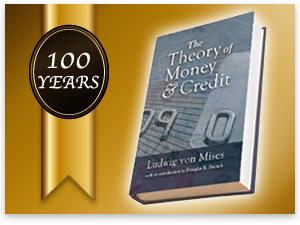 Paul Krugman and Brad Delong have recently tag-teamed in blog posts (here and here) to again attempt to discredit Austrian economics in general and Ludwig von Mises in particular. Such attempts from economists attached to a Keynesian macro and money theory go back to Keynes's very negative review of Mises's German original of Theory of Money and Credit (per Hülsmann in Last Knight, better translated as Theory of Money and Fiduciary Media). In this 1914 review Keynes wrote, "Dr. Mises strikes an outside reader as being the very highly educated pupil of a school once of great eminence, but now losing its vitality" (emphasis added). And

One closes the book, therefore, with a feeling of disappointment that an author so intelligent, so candid, and so widely read should, after all, help one so little to a clear and constructive understanding of the fundamentals of his subject.1

Keynes, here at least, gave the appearance of having actually attempted to read Mises. But the review was, to put it kindly, unflattering and superficial. It contains no detailed discussion or specific critique, only generalities and slurs. Keynes, in the Treatise,2 where he recognizes Wicksell's contributions and the development of a "neo-Wicksell" school in Germany and Austria, which includes works by Mises and Hayek, provides a clue why. While crediting the approach as having a theory of the credit cycle fairly close to the theory of the Treatise, Keynes admitted that his limited knowledge of the German language was such that "in German I can only clearly understand what I know already — so that new ideas are apt to be veiled from me by the difficulties of language" (1971 [1930], n.2, p. 178).

Given the major works by Mises (and Hayek) are now readily available in English translations (or were written in English), Delong and Krugman have no such excuse for their straw-man presentations, which exhibit laziness, intentional lack of scholarly effort, and a deliberate misrepresentation to make their case to discredit appear stronger.

Krugman's post is, while ill-informed, mercifully short. Compared to Delong — whose post is not only ill-informed but long, tedious, and needlessly offensive — Krugman appears a gentleman and scholar.3

But rather than reply, I'll provide a short reader's guide to the key parts of Austrian monetary theory. This theory is very relevant today for understanding the recent crisis and recession and the continuing slow recovery; it underlies essential reforms needed if we are ever to restore sound money as a foundation for peace and prosperity.

At the core of Austrian monetary theory, especially as developed by Mises, are two key fundamentals: The first is a well-developed distinction between financial intermediation, which is viewed as mutually beneficial exchange facilitating the flow of funds from ultimate capitalistic savers to investors in capital goods embodied in a structure of production, and created credit, credit created "out of nothing," which misallocates resources and set the economy up for boom-bust episodes. The second is an equilibrium-interest-rate concept, the "natural rate," that reflects the

Credit creation temporarily suspends this adjustment process. Credit creation alters the money rate of interest relative to the equilibrium rate and disrupts the balance between the "supply and demand" for capital.

Mises developed an argument clearly explaining why and how credit creation takes place. He cautioned,

One must be careful not to speak simply of the effects of credit in general on prices, but to specify clearly the effects of "increased credit" or "credit expansion." A sharp distinction must be made between (1) credit which a bank grants by lending its own funds or funds placed at its disposal by depositors, which we call "commodity credit" and (2) that which is granted by the creation of fiduciary media, i.e., notes and deposits not covered by money which we call "circulation credit."5

Circulation credit is created credit, because

Circulation credit is granted out of funds especially created for this purpose by banks. In order to grant a loan, the bank prints banknotes or credits the debtor on deposit account. It is creation of credit out of nothing.6

Others in the Austrian tradition who attempted to define credit creation include Machlup and Selgin. Machlup explicitly calls Mises's circulation credit "created credit":

Selgin defines created credit as "credit granted independently of any voluntary abstinence from spending by holders of money balances."8

Created credit, not savings-generated credit, drives over consumption and malinvestment,9 and sets the economy up for a economic and financial crisis. For more detail in an easy-to-follow slide show, see "Sustainable and Unsustainable Growth" created by Roger W. Garrison.

The US economy clearly suffered two such events between 1996 and 200910 and continues a slow non-recovery.

Donald J. Boudreaux, at Café Hayek in a mock letter to The Economist, nicely sums up the current importance of an Austrian view:

You are critical of F.A. Hayek's thesis that "malinvestments" — investments poorly coordinated with the saving plans of households and hence the strength of future demands for consumer goods — can generate periods of high unemployment ("Hayek on the standing committee," Sept. 15). You then write that the "better lesson to take from Hayek" comes from "[h]is later works praising the price mechanism and fretting about economic planning."

But what you call Hayek's "better lesson" is the larger insight at the heart of his theory of malinvestment. Hayek understood that successful mutual coordination of the economic decisions of millions of people occurs to the extent that prices — which guide people's economic decisions — accurately reflect underlying economic realities such as resource scarcities and households' preferences for saving. He reasoned, therefore, that government activities that distort prices cause prices to 'lie' about underlying economic reality and, hence, cause prices to mislead economic actors into making an unusually large number of plans that are destined to fail.

In the case of malinvestment (note: not simple over-investment), excess money creation distorts the interest rate, causing it for a time to mislead businesses into producing too many long-lived capital goods and too few other goods. For the economy to again thrive requires that these malinvestments be corrected.

How to right the situation? Elimination of the central bank and monetary reform!

I have argued elsewhere,

Mises11 developed the argument that fractional-reserve banking creates credit. Created credit is the source of the malinvestment of the boom phase of the cycle. But significant malinvestment in the Misesian cycle depends on central bank action or government backed special privileges, either explicit or implied. The central bank either actively provides new base money which banks use to create credit or the central bank passively makes new base money available to provide the needed liquidity [reserves] to an overextended banking system. Machlup argues, "Professor Mises believes, furthermore, that commercial banks alone without the support of the central bank can never produce a dangerous credit inflation."12 Mises is quite emphatic on this point, "But today credit expansion is an exclusive prerogative of government."13 Without central bank activity, the credit creation by fractional reserve banks would be limited in extent. Large misdirection of production caused by credit creation requires either newly created base money or the promise to create new base money in the event of a crisis by a central bank. White14 provides a supporting argument relative to the most recent crisis, "A commodity standard with free banking, and no central bank to distort the financial system[emphasis mine], would have avoided such a boom-and-bust credit cycle."

In a recent important new paper, Joe Salerno carefully argues that Mises's development of his theory of money, credit, and credit cycles is a consistent application and expansion (with correction) of the currency principle. Following the currency principle, free banking is a means to ultimately establish a sound money system. Through competition and a "mechanism of brand extinction," banking freedom would end credit creation and with it the boom-bust cycle, monetary central planning, mondustrial policy and the blending of monetary and fiscal policy that currently threatens prosperity and liberty worldwide.

For those who would better understand the depth of the Austrian arguments, including areas of legitimate disagreement, I would suggest reading the best of Austrian analysis and not rely on caricatures such as the recent misrepresentations presented by Professors Krugman and DeLong. See the suggested reading at the end of the article.

I would argue that a careful review of Mises's (and Hayek's) arguments and of this theory and its accompanying applications to recent economic history as developed more by scholars such as Garrison, Salerno, White, Ravier, Higgs, Boettke, or Lewin would convince many reasonable people that Mises's framework is "so so so so so so so so so" believably correct and most relevant to today's economy and should be the basis for a current policy that would lead to a sustainable recovery and long-needed monetary reform to better prevent future depressions.15

Ludwig von Mises's "Monetary Theory in Light of Modern Monetary Thought" and "Preventing Currency Crises: The Currency Board Versus the Currency Principle" in Money, Sound and Unsound, pp. 93–103, 497–533.

Monetary Nationalism and International Stability, 1937 with a 1964 Kelly reprint now available in Prices and Production and Other Works: F.A. Hayek on Money, the Business Cycle, and the Gold Standard, 351–359 and 337–366.

Mises, Ludwig von. 1971 [1912]. The Theory of Money and Credit. New York: The Foundation for Economic Education.

——. 2006 [1978]. The Causes of the Economic Crisis, and Other Essays Before and After the Great Depression. Auburn, Ala.: Ludwig von Mises Institute.