A Crisis of Global Statism 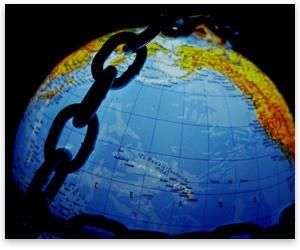 The current financial turmoil is a "crisis of capitalism," said a spokesman for Britain's Socialist Workers Party, as good Marxists have been repeating for more than a century. "[A]n unregulated financial system is a disaster," echoed Sheila Rowbotham, professor of gender and labor history at Manchester University. Added a leftist London mayoral candidate, "Capitalism has had its chance and failed; now it's socialism's turn."

I wonder what they have been smoking.

Remember that the financial crisis opened last year with the meltdown of the American subprime mortgage market. At that time, half of the residential mortgages in the United States were already held or guaranteed by Fannie Mae and Freddie Mac, two so-called "government sponsored enterprises" (GSE). Over the past year, the two GSEs have financed four out of five mortgages. Fannie Mae was created in the wake of the Great Depression by Franklin D. Roosevelt; Freddie Mac by Congress in 1970. Private investors happily bought securities issued by the two GSEs because they knew the federal government would never let these companies fail — which proved true last week when they were entirely taken over by Washington. Before the crisis started, the American mortgage market was a paragon of socialism, unparalleled in any other Western country.

The 1997 Community Reinvestment Act, which prevents mortgage lenders from "discriminating" against minority applicants, did not help sound financial decisions. At every turn of a financial decision, some regulator is lurking.

The American financial system is tightly regulated. Created in 1934, the powerful Securities and Exchange Commission (SEC) enforces regulations on all kinds of financial transactions, from registration of securities to disclosure of corporate information. The 2002 Sarbanes-Oxley Act further extended the intervention domain of the SEC. The US Department of Justice prosecutes CEOs and entrepreneurs, and the convicted targets are often given long jail sentences. On Thursday, the New York attorney general — a would-be Eliot Spitzer or Patrick Fitzgerald — announced that he has started a "wide-ranging investigation into short selling in the financial market."

When Treasury Secretary Hank Paulson says, "I don't believe in raw capitalism without regulation," he is not revealing a scoop. He is reiterating what has been official American policy for the last century. Whether the result is financial socialism with a human capitalist face, or state capitalism with a strong socialist flavor, it is a matter of choosing between a half-empty and a half-full glass.

The partial exportation of American regulation to other countries has led to a sort of global financial statism.

Another source of financial turmoil has been the brisk increase in the money supply by the American central bank, the Federal Reserve System, as indicated in higher inflation and low interest rates. For many years, economists of the so-called "Austrian" school of economics (in the wake of late Nobel prizewinner Friedrich Hayek and Ludwig von Mises) have warned us of an impending disaster if money is pumped into the economy to prevent necessary adjustments. This, they claimed, will ultimately bring a worse crisis.

There is no inherent reason to trust the state to regulate efficiently. The state is made of men (politicians and bureaucrats) who respond to their own incentives and interests. If there is a political gain to be made from expanding mortgages and postponing a crisis for future politicians to deal with, it will be pursued.

Despite this, a false confidence in the power of the state to guarantee stability has developed. Some investors have come to believe that, whatever mistake they make, they have a right to their profits, and the authorities will enforce it. The rescue of Bear Stearns, the two GSEs and AIG will only fuel this belief. But if some people have made bad investments and are relieved from their responsibility for their own mistakes, it only means that the cost will be transferred to others, probably through a worse crisis.

Moreover, as many commentators have remarked, guaranteeing large financial firms from failure will bring calls for regulating them still more tightly. This is an old story: past political interventions create the reasons for new ones.

The present financial turmoil is really a failure of global statism. Socialism has failed once again. Let's try capitalism.

Pierre Lemieux is an economist in the Department of Management Sciences of the Université du Québec en Outaouais and a research fellow at the Independent Institute.