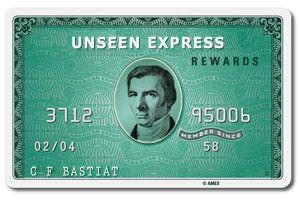 In all times, but more especially of late years, attempts have been made to extend wealth by the extension of credit.

I believe it is no exaggeration to say, that since the revolution of February, the Parisian presses have issued more than 10,000 pamphlets, crying up this solution of the social problem.

The first thing done is to confuse cash with produce, then paper money with cash; and from these two confusions it is pretended that a reality can be drawn.

It is absolutely necessary in this question to forget money, coin, bills, and the other instruments by means of which productions pass from hand to hand. Our business is with the productions themselves, which are the real objects of the loan; for when a farmer borrows fifty francs to buy a plow, it is not, in reality, the fifty francs which are lent to him, but the plow; and when a merchant borrows 20,000 francs to purchase a house, it is not the 20,000 francs which he owes, but the house. Money only appears for the sake of facilitating the arrangements between the parties.

Peter may not be disposed to lend his plow, but James may be willing to lend his money. What does William do in this case? He borrows money of James, and with this money he buys the plow of Peter.

But, in point of fact, no one borrows money for the sake of the money itself; money is only the medium by which to obtain possession of productions. Now, it is impossible in any country to transmit from one person to another more productions than that country contains.

Whatever may be the amount of cash and of paper which is in circulation, the whole of the borrowers cannot receive more plows, houses, tools, and supplies of raw material, than the lenders altogether can furnish; for we must take care not to forget that every borrower supposes a lender, and that what is once borrowed implies a loan.

This granted, what advantage is there in institutions of credit? It is that they facilitate, between borrowers and lenders, the means of finding and treating with each other; but it is not in their power to cause an instantaneous increase of the things to be borrowed and lent. And yet they ought to be able to do so, if the aim of the reformers is to be attained, since they aspire to nothing less than to place plows, houses, tools, and provisions in the hands of all those who desire them.

And how do they intend to effect this?

By making the state security for the loan.

We will suppose that there is but one plow in the world, and that two farmers apply for it.

Peter is the possessor of the only plow which is to be had in France; John and James wish to borrow it. John, by his honesty, his property, and good reputation, offers security. He inspires confidence; he has credit. James inspires little or no confidence. It naturally happens that Peter lends his plow to John.

But now, according to the Socialist plan, the state interferes, and says to Peter, "Lend your plow to James, I will be security for its return, and this security will be better than that of John, for he has no one to be responsible for him but himself; and I, although it is true that I have nothing, dispose of the fortune of the taxpayers, and it is with their money that, in case of need, I shall pay you the principal and interest." Consequently, Peter lends his plow to James: this is what is seen.

And the socialists rub their hands, and say, "See how well our plan has answered. Thanks to the intervention of the state, poor James has a plow. He will no longer be obliged to dig the ground; he is on the road to make a fortune. It is a good thing for him, and an advantage to the nation as a whole."

Indeed, it is no such thing; it is no advantage to the nation, for there is something behind which is not seen.

It is not seen, that the plow is in the hands of James, only because it is not in those of John.

It is not seen, that if James farms instead of digging, John will be reduced to the necessity of digging instead of farming.

That, consequently, what was considered an increase of loan, is nothing but a displacement of loan. Besides, it is not seen that this displacement implies two acts of deep injustice.

It is an injustice to John, who, after having deserved and obtained credit by his honesty and activity, sees himself robbed of it.

It is an injustice to the taxpayers, who are made to pay a debt which is no concern of theirs.

Will anyone say, that government offers the same facilities to John as it does to James? But as there is only one plow to be had, two cannot be lent. The argument always maintains that, thanks to the intervention of the state, more will be borrowed than there are things to be lent; for the plow represents here the bulk of available capitals.

It is true, I have reduced the operation to the most simple expression of it, but if you submit the most complicated government institutions of credit to the same test, you will be convinced that they can have but one result; viz., to displace credit, not to augment it. In one country, and in a given time, there is only a certain amount of capital available, and all are employed. In guaranteeing the nonpayers, the state may, indeed, increase the number of borrowers, and thus raise the rate of interest (always to the prejudice of the taxpayer), but it has no power to increase the number of lenders, and the importance of the total of the loans.

There is one conclusion, however, which I would not for the world be suspected of drawing. I say, that the law ought not to favor, artificially, the power of borrowing, but I do not say that it ought not to restrain them artificially. If, in our system of mortgage, or in any other, there be obstacles to the diffusion of the application of credit, let them be got rid of; nothing can be better or more just than this. But this is all which is consistent with liberty, and it is all that any who are worthy of the name of reformers will ask.