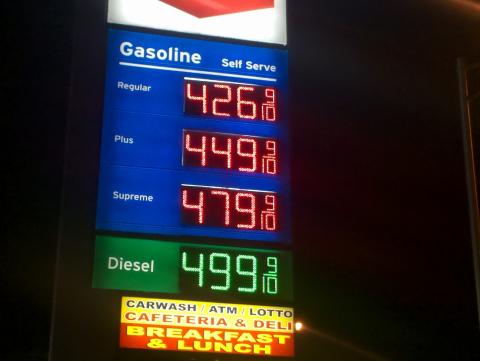 As television cameras were replaying the collapse of the World Trade Towers Tuesday afternoon, panic buying of gasoline quickly set in.  People who were suddenly fearful that they might not be able to purchase a tank of gasoline began to crowd gas stations in many cities, and not long afterward, unsurprisingly, gasoline prices soared to levels of close to $5 a gallon in some areas.

Such is the behavior of consumers in panic situations.  When I lived in the South, the mere hint by a weather forecaster that snow might be on the way inevitably triggered a wave of customers crowding grocery stores, milk and bread being the chief goods they quickly cleared off the shelves.  While such panic is understandable, it certainly did not create a "state of emergency" and did not justify intervention by the state.

While Southern governors might not declare "states of emergency" for panic buying in the face of dreaded snowstorms, they apparently still have a desire to extend their authority to the private exchanges between buyers and sellers of gasoline. Yesterday, The Wall Street Journal reported that the Republican governors of Texas, Florida, and Mississippi all have declared such "states of emergency" because of complaints they have received regarding high gasoline prices.  The Democratic Mississippi attorney general, Mike Moore, who was one of the original leaders in the extortionist "tobacco settlement," has even declared that he will arrest and charge some gas station owners with felonies because they raised gasoline prices against "price gouging" laws.

While not threatening to incarcerate those who have committed these "economic crimes," the attorney general of Illinois, Jim Ryan, has sued one firm because it charged $5 a gallon for gasoline.  Other AGs (aspiring governors?) are looking into similar actions.  Maryland, my new home, is also under a "state of emergency" declared by Democratic Governor Parris Glendening, although no one in this state was even attacked.

Thus, we have the great irony that, in the wake of these attacks on American soil, American politicians are, in effect, endorsing the kinds of totalitarian measures that they supposedly condemn elsewhere.  Charging $4, $5, or even $100 for a gallon of gasoline is not a crime; rather, it is a logical response to what buyers and sellers perceive to be the current market situation.  This is not to say that consumers are always correct in their assessment of the market, but that their actions are logical given what they believe to be true.

For the most part, economists correctly point out that when there is a surge of demand for something, unless supplies can be increased likewise, prices must rise to reflect the demand and relative scarcities or else there will be shortages.  Despite the mangled definition of shortage we hear on the evening news (in which the pundits confuse the term "shortage" with "scarcity"), a shortage occurs because the price does not reflect current demand and supplies on hand.

When the U.S. government slapped price controls on gasoline during the 1970s, there were periodic outbursts of demand increases whenever there was a Middle East crisis or whenever OPEC announced future price hikes.  Consumers, correctly perceiving gasoline prices would rise in the future, would quickly run to gas stations to purchase gas at the current lower prices.

Because U.S. law did not permit gasoline retailers to raise prices right away, it would not be long before supplies would begin to run low.  Furthermore, as word of dwindling supplies spread throughout the buying public, even more people would go to gas stations in order to buy gas before supplies ran out altogether.  After the government permitted prices to rise, however, markets would settle down—until the next wave of bad news would hit.

During the Gulf War in 1991 and the U.S. military buildup in the fall of 1990, U.S. retailers were able to raise prices immediately in the face of surging demand, thus ending shortages and panic buying before they even began.  While prices were relatively high, gasoline markets were orderly.  This did not please the politicians, however, who insisted that the government reinstate price controls.  In fact, Sen. Joe Lieberman (D-Conn.) introduced a bill that would have made it a felony punishable by five years in prison to raise gasoline prices during an emergency.

While the typical economic explanations as to why governments should not have price controls are correct as far as they go, they often miss a crucial point. We are not speaking of abstract theory but rather of peaceful, private exchanges of private property—something that Austrian economists understand almost instinctively but that most mainstream economists who are fixated on the unicorn of "efficiency" miss.

To look at it another way, the gasoline retailers in the aforementioned states owned the gasoline that they were selling.  They are free to dispose of the substance in any peaceful fashion, as long as they do not inflict harm upon their neighbors.  They can put it in their own cars and other gasoline-powered engines, or they can sell it.  It is (or at least should be) their right to ask any price they would like.

For example, if I were to sell my house, I should have the freedom to ask $1 million for it.  Granted, it would not sell for even a tenth of that amount in this local market, but there is nothing inherently wrong in my asking for $1 million.  Exchanges require both sellers and buyers, who ultimately have the say in whether or not the good in question is sold.

According to the AGs and their supporters, gasoline retailers should be restricted in what they can ask buyers to pay for their product.  While consumers always want lower prices (I’ll take it for free, thank you), the point is that unless we permit full private ownership of the good on behalf of the seller—and give the seller to right to dispose of that good as he sees fit—there can be no true economic calculation for that product.  In fact, it was the lack of private property that ultimately drove down the Communist Bloc, because it was impossible for socialist planners to accurately engage in the necessary economic calculation to keep their economies in order (something that Austrians have been pointing out for years, beginning with Ludwig von Mises).

Instead, what the politicians want is for things to be priced politically, a situation in which they and their bureaucratic underlings take what is de facto privately owned goods and distribute them to maximize political benefits.  This is a recipe for disaster, and a monstrous injustice to owners of private property.  If people like Mike Moore are successful in prosecuting and imprisoning people for exercising what should be their rights of private ownership, then we are not free people: We are nothing more than pawns in a true fascist sytem of government.