The Corrupt Origins of Central Banking 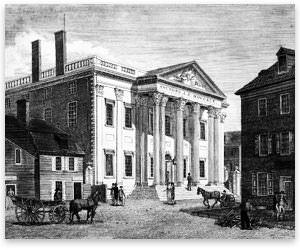 Central banking has been a corrupt, mercantilist scheme and an engine of corporate welfare from its very beginning in the late 18th century. The first central bank, the Bank of North America, was "driven through the Continental Congress by [congressman and financier] Robert Morris in the Spring of 1781," wrote Murray Rothbard in The Mystery of Banking (p. 191). The Philadelphia businessman Morris had been a defense contractor during the Revolutionary War who "siphoned off millions from the public treasury into contracts to his own … firm and to those of his associates." He was also "leader of the powerful Nationalist forces" in the new country.

The main objective of the Nationalists, who were also known as Federalists, was essentially to establish an American version of the British mercantilist system, the very system that the Revolution had been fought against. Indeed, it was this system that the ancestors of the Revolutionaries had fled from when they came to America. As Rothbard explained, their aim was

To reimpose in the new United States a system of mercantilism and big government similar to that in Great Britain, against which the colonists had rebelled. The object was to have a strong central government, particularly a strong president or king as chief executive, built up by high taxes and heavy public debt. The strong government was to impose high tariffs to subsidize domestic manufacturers, develop a big navy to open up and subsidize foreign markets for American exports, and launch a massive system of internal public works. In short, the United States was to have a British system without Great Britain. (p. 192)

An important part of the "Morris scheme," as Rothbard called it, was "to organize and head a central bank, to provide cheap credit and expanded money for himself and his allies. The … Bank of North America was deliberately modeled after the Bank of England." The Bank was given a monopoly privilege of its notes being receivable in all tax payments to state and federal government, and no other banks were permitted to operate in the country. It "graciously agreed to lend most of its newly created money to the federal government," wrote Rothbard, and "the hapless taxpayers would have to pay the Bank principal and interest."

Despite these monopolistic privileges, a lack of public confidence in the Bank's inflated notes led to their depreciation and the Bank was privatized by the end of 1783. But Morris did not give up on his scheme. He recruited a young Alexander Hamilton to serve more or less as his political puppet within the Washington administration. (Rothbard called Hamilton "Morris's youthful disciple.") In fact, the reason why Hamilton became Treasury secretary, despite having no reputation at all in the field of finance, was the recommendation by Morris to George Washington. (During the Revolutionary War, when he was an aide to Washington, Hamilton took the time to write Morris a 30-page letter proclaiming that he agreed with every one of his ideas about protectionist tariffs, corporate subsidies, and a government-run bank to finance them.)

Morris and his fellow Nationalists wanted a king-like chief executive who would rule over a mercantilist empire, just as the king of England ruled over his mercantilist empire. They, of course, would be the ones to advise and instruct the "king" and benefit financially from such an empire. So their young protégé Hamilton commenced his seven-year crusade to overthrow the first US constitution — the Articles of Confederation — by calling for a new constitutional convention to supposedly "revise" the Articles of Confederation. At the convention, Hamilton laid out his (really Morris's) plan: a permanent president who would appoint all the governors and who would have veto power over all state legislation. Under such a plan, state sovereignty would have been destroyed, and there would have been no escape from the central government's high taxes, protectionist tariffs, heavy debt, and foreign-policy imperialism — the agenda of the Nationalists.

The Hamilton/Morris plan was defeated, of course, as was the proposal made at the convention to include a central bank among the delegated powers to the federal government. But the government was more highly centralized, as "the Nationalist forces pushed through a new Constitution" and "were on their way to re-establishing the mercantilist and statist British model…" (p. 193). They begrudgingly acquiesced in a Bill of Rights in return for the anti-Federalists' support for the new Constitution. And most importantly, writes Rothbard,

A critical part of their program was put through in 1791 by their leader, Secretary of the Treasury, Alexander Hamilton, a disciple of Robert Morris. Hamilton put through Congress the First Bank of the…. United States…. modeled after the old Bank of North America [whose]….longtime president and former partner of Robert Morris, Thomas Willing of Philadelphia, was made president of the New Bank.

Northern merchants provided the main political support for Hamilton's Bank, whereas southern politicians like Jefferson supplied most of the opposition to it, seeing it as nothing more than a vehicle for financing an American version of the corrupt British mercantilist system, which would be destructive of liberty and prosperity. They were right, of course, and remain right to this day.