GET NEWS AND ARTICLES IN YOUR INBOXPrint
A
A
Home | Mises Library | Correction, Mr. Bernanke 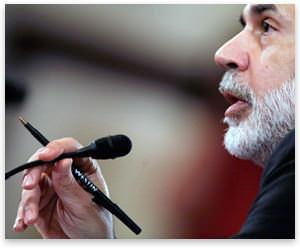 In his speech at the Economic Club in Washington, DC on December 7, the Fed chairman, Ben Bernanke, detailed his expectations of the future course of the US economy. Below, I comment on the various parts of Bernanke's speech.

A year ago, our economy — indeed, all of the world's major economies — were reeling from the effects of a devastating financial crisis. Policymakers here and abroad had undertaken an extraordinary series of actions aimed at stabilizing the financial system and cushioning the economic impact of the crisis. Critically, these policy interventions succeeded in averting a global financial meltdown that could have plunged the world into a second Great Depression.

The actions that policymakers have taken amount to the introduction of extremely loose monetary and fiscal policies. But how does Bernanke know that such policies have averted a global financial meltdown? Neither printing money nor increasing government spending can be a catalyst for economic growth.

Although the working down of inventories has encouraged production, a sustainable recovery requires renewed growth in final sales.

It is real savings that fund economic activity. The increase in the pool of real savings is the key behind sustained real economic growth.

A number of factors support the view that the recovery will continue next year. Importantly, financial conditions continue to improve.… Monetary and fiscal policies are supportive.

The so-called economic recovery in terms of GDP is likely to continue for another six months on account of massive monetary pumping. This, however, will continue to undermine the economy's ability to generate real wealth and hence a sustained economic recovery.

The Federal Reserve has been, and still is, doing a great deal to foster financial stability and to spur recovery in jobs and economic activity. Notably, we began the process of easing monetary policy in September 2007, shortly after the crisis began. By mid-December 2008, our target rate was effectively as low as it could go — within a range of 0 to 1/4 percent, compared with 5-1/4 percent before the crisis — and we have maintained that very low rate for the past year.

It is precisely the low-interest-rate policy between 2001 and June 2004 that was instrumental for creating the economic crisis — how could more of the same policy make things better?

In addition to easing monetary policy and acting to stabilize financial markets, we have worked in our role as a bank supervisor to encourage bank lending.

Note that banks are just intermediaries, they can lend what savers have made it possible for them to lend. If the pool of real savings is growing, then bank lending will also grow — the opposite will hold if the pool of real savings is declining. It seems to us that Bernanke wants the banks to start expanding credit out of thin air. But if the banks were to succumb to his pressure, they would only weaken the process of real-wealth formation.

All told, the Federal Reserve's actions — in combination with those of other policymakers here and abroad — have helped restore financial stability and pull the economy back from the brink. Because of our programs, auto buyers have obtained loans they would not have otherwise obtained, college students are financing their educations through credit they otherwise likely would not have received, and home buyers have secured mortgages on more affordable and sustainable terms than they would have otherwise. These improvements in credit conditions in turn are supporting a broader economic recovery.

In the absence of central-bank and government interference with the economy, the pool of real resources would be allocated in accordance with individuals' priorities. The allocation would be done in such a way as to enable sustainability. In short, any expansion in consumption would be fully backed up by useful production.

Loose monetary and fiscal policies are disruptive. They lay the foundation for various activities that the market will not support because people are not wealthy enough to pursue them. It is precisely during a recession that the waste these activities impose is revealed. How in the world can support for various nonproductive activities that sprang on the back of loose monetary policy generate a broader economic recovery? If anything, such support can only weaken productive activities and make things much worse.

The scope and scale of our actions, however, while necessary and helpful in my view, have left some uneasy. In all, our asset purchases and lending have caused the Federal Reserve's balance sheet to more than double, from less than $900 billion before the crisis began to about $2.2 trillion today. Unprecedented balance sheet expansion and near-zero overnight interest rates raise our third frequently asked question: Will the Federal Reserve's actions to combat the crisis lead to higher inflation down the road?

The answer is no; the Federal Reserve is committed to keeping inflation low and will be able to do so. In the near term, elevated unemployment and stable inflation expectations should keep inflation subdued, and indeed, inflation could move lower from here.

What Bernanke labels as inflation is merely an increase in prices. In truth, inflation is an increase in the money supply. Now, a price of a good is the amount of money paid per unit of it. If money rises by 5% and the supply of goods increases also by 5%, for Bernanke there is no inflation. But in fact the rate of inflation is 5%. What matters here is that money supply is expanding and thus undermining the process of real-wealth formation.

The Fed's massive pumping is inflationary. Observe the increase in the stock market by over 50% since March this year and massive increases in commodity prices — both are the manifestations of inflation. Regardless of inflation expectations and the unemployment rate, no inflation can take place if the money rate of growth remains unchanged.

However, as the recovery strengthens, the time will come when it is appropriate to begin withdrawing the unprecedented monetary stimulus that is helping to support economic activity.

How in the world can monetary stimulus support economic activity in general? All that money pumping can do is to redistribute a given pool of real resources. The money pumping cannot generate more real wealth. It can only provide support to various nonproductive, false activities by diverting real wealth away from wealth generators.

We have been giving careful thought to our exit strategy. We are confident that we have all the tools necessary to withdraw monetary stimulus in a timely and effective way.

As we at the Federal Reserve and others work to build on the progress already made toward securing a sustained economic recovery with price stability, we must also continue to address the weaknesses that led to the current crisis. Thus, our final question this afternoon is: How can we avoid a similar crisis in the future? Although the sources of the crisis were extraordinarily complex and numerous, a fundamental cause was that many financial firms simply did not appreciate the risks they were taking.

All that the authorities should be doing to prevent future crises is to prevent the Fed from conducting open-market operations and tampering with interest rates. In a genuine free-market economy no one should supervise financial firms regarding their risk taking. The best supervisor is profit and loss.

Our regulatory structure requires a better mechanism for monitoring and addressing emerging risks to the financial system as a whole. Because of the size, diversity, and complexity of our financial system, that task may exceed the capacity of any individual agency. The Federal Reserve therefore supports the creation of a systemic oversight council, made up of the principal financial regulators, to identify developments that may pose systemic risks, recommend approaches for dealing with them, and coordinate the responses of its member agencies.

We suggest that the threat of future crises will disappear once the Fed stops tampering with interest rates and the money supply. Furthermore we suggest that the act of money creation out of thin air is going to disappear once the present paper standard is replaced with a gold standard. If we allow a market-chosen money to fulfill the role of the medium of exchange, the issue of inflation will also disappear.
Author: