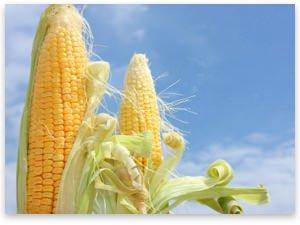 Weather didn't get in the way of economics. The US Department of Agriculture said last week that surveys conducted during the first two weeks of last month found farmers had planted 92.3 million acres of corn, the second most since World War II after 93.5 million acres in 2007.

The news sent corn futures down nearly 10 percent on Thursday and another 3.8 percent on Friday, after prices had reached close to $8 just weeks ago.

Some economists think the USDA not only can't count but didn't take into account the acreage that's flooded in corn country. But for now the government reports "threw a wrench into everything we were thinking," said Curt Hudson, whose family farm has 2,500 acres devoted to corn growing.

Hudson not only grows but speculates on the commodity. He had purchased options on corn futures recently, expecting a bullish USDA report, while also holding on to some of last year's crop expecting to take advantage of higher prices.

In 2005, corn fetched less than $2 a bushel, and farmers are like anyone: chase a buck and a bubble. Bill Bonner wrote a couple years ago,

Judged as a businessman, the typical farmer would make a good veterinarian. Over and over, he walks into the same trap. When prices go up, he borrows in order to expand his holdings. He buys more equipment. He leases more land. And he plants more crops to take advantage of the high prices.

Although Mr. Hudson had forward-contracted to sell 40 percent to 50 percent of this year's crop at the elevated prices, the report is "frustrating and stressful," he told the Wall Street Journal.

This isn't the first time grain prices have boomed. Crop prices surged in the 1970s as grain demand from the Soviet Union swelled. Farmland prices shot up 30 percent a year in the mid-1970s, peaking in 1979 with prices in Iowa averaging $1,958 an acre (that would be just short of $6,000 if adjusted for inflation). The net cash yield on land was 4.55 percent in 1979.

But the trend did not last, and prices fell. When rising interest rates at the time began to hit troubling levels, the two developments together jolted the Farm Belt, driving down land values nearly 30 percent in the 1980s, with net yields reaching 10 percent.

Of course, today's Big Ag boom is sponsored by ethanol subsidies from the state. Just as when the federal government told farmers during WWI to grow wheat to win the war, Congress voted to double production of corn-based ethanol "to win Al Gore's war" — and so a third of the US corn crop could be dedicated to making fuel, up from 7 percent in 2001.

David Peligal at Grant's Interest Rate Observer says that if the ethanol subsidy were removed, the price of corn would collapse. Senator Tom Coburn, a Republican from Oklahoma, has put forth just such a bipartisan proposal to end the 45-cent federal tax credit for every gallon of ethanol-blended gasoline.

Farmland prices doubled nationally in the 2000s, to more than $2,300 per acre, according to the US Department of Agriculture, and prices today in soil-rich areas of Iowa and Illinois are more than three times that level. Values for nonirrigated cropland soared by 10 percent or more in 2010 alone in states across the Midwest, according to the Federal Reserve Bank of Kansas City.

Net cash yields cluster around 3.5 percent for corn land in Iowa and wheat land in Kansas. At the height of the 1970s boom the net cash yield was 4.55 percent.

Grant's Interest Rate Observer provides some color to the auction. It turns out the farmers bidding for the ground dropped out at $9,000 an acre and then two investors took it the rest of the way. A gentlemen who attended the auction said it was the slowest he'd ever seen. The last $1,000 was bid up in $25 increments.

It's thought that this bull market in ground is firmer than the 1970s version because lots of acreage has been bought for cash, and bankers are limiting purchase loans to 50–55 percent because "cash rents haven't caught up with some of the values of the properties yet."

That happens in all real-estate bubbles. A lender told Grant's, "one of the lessons learned in the 1980s is that rising asset values do not repay loans."

Right, but the underwriting likely assumes these Fed-flattened rates will last forever.

Cotton prices are also on a tear, and the price of land it's grown on reflects the boom. Irrigated cropland in the northern Low Plains region of Texas fetched more than $1,400 an acre in the fourth quarter of last year, and there have been recent sales at $2,000 an acre, which would generate a net cash yield of 3.5 percent (just like wheat land and corn land).

Real live farmers don't seem to be selling. After all, what will they do with the money? A 3.5 percent cash yield, assuming current prices, is better than the 1 percent interest banks are paying. More buyers than sellers means prices are rising.

The prevailing cash-rent multiple is over 27 times. Back in 1987, that multiple was less than 13 times. Rent multiples have averaged 20 times since 2001, during which time the price of Indiana farmland has doubled.

Even bank regulators are worried about cropland prices.

The FDIC's Sheila Bair said "the steep rise in farmland prices we have seen in recent years creates the potential" for serious trouble for both bankers and farmers, particularly if the ethanol industry falters just as interest rates are expected to soon rise.

Brian Briggeman, an economist with the Federal Reserve, points out that if rates on real-estate loans rose from around 5 percent today to something closer to the historical average of about 7 percent, farmland values could fall by a third.

Should crop prices fall and interest rates rise, Bair said, local economies that depend heavily on farming could see their fiscal health rocked as they "tend to rise and fall" with the success of agriculture.

Regulators may be concerned, but Gary Taylor, cofounder of Agri Cura LLC, a farm investment-management venture, told Grant's, "This feels different than the 1980s."

Back then it was a mad land rush and people were leveraging all they had. … You always worry about a bubble. But for an old guy like me, who has been through a couple of these, you say, "Oh well, agriculture will find a way to resolve this and prices will go down." But this doesn't feel like the others felt. It's driven by demand from China, and soon to be India. We liquidated all of our grain and fiber reserves here in the last five or six years, and we don't have a cushion anymore. It's different.

That's for sure. Every new bubble feels different.