The Commons and the Tragedy of Banking 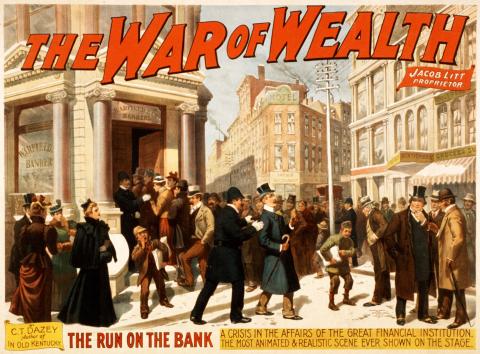 Bioethicist Garrett James Hardin, who coined the term "tragedy of the commons," passed away this September at the age of 88. In his now famous 1968 essay,  "The Tragedy of the Commons," Hardin describes how common, i.e., public, property, is overused until it deteriorates or is destroyed.

Because of his essay, many consider him to have fathered the concept of the tragedy of the commons; however, Ludwig von Mises describes this concept in relation to external costs in his 1940 Nationalökonomie1 and, later, in Human Action (1949):

"If land is not owned by anybody, although legal formalism may call it public property, it is utilized without any regard to the disadvantages resulting. Those who are in a position to appropriate to themselves the returns—lumber and game of the forests, fish of the water areas, and mineral deposits of the subsoil—do not bother about the later effects of their mode of exploitation. For them the erosion of the soil, the depletion of the exhaustible resources and other impairments of the future utilization are external costs not entering into their calculation of input and output. They cut down the trees without any regard for fresh shoots or reforestation. In hunting and fishing they do not shrink from methods preventing the repopulation of the hunting and fishing grounds."2

Hardin's tragedy of the commons, though, has a more recent and direct connection to Austrian economics. In Dinero, Crédito Bancario y Ciclos Económicos, which will soon be available in English (published by the Mises Institute; Spanish edition reviewed here), Huerta de Soto applies the concept of the tragedy of the commons to an analysis of fractional reserve banking.3

As Huerta de Soto points out, the problem of the tragedy of the commons always appears when property rights are defined improperly. In the case of fractional reserve banking, bankers can infringe on property rights because it is not clearly defined who owns the deposit.

When customers make their deposits, the promise is that the deposit is always available for withdrawal. However, the deposits, by the very definition of fractional reserve banking, are never completely available to all customers at one time. This is because banks will take a part of these deposits and loan them out to other customers. In other words, they issue fiduciary media. By issuing more property titles than property entrusted to them, the banks violate the traditional property rights of their customers. (One of the most important contributions of Huerta de Soto's exhaustive book is to demonstrate how banking developed historically and that fractional reserve banking evolved as a perversion of deposit banking.)

Banks that infringe upon and abuse the property rights of their clients can make very good profits. The temptation to expand credit is almost irresistible. Moreover, they will try to expand credit and issue fiduciary media as much as they can possibly get away with.

This credit expansion brings about another typical feature found in the tragedy of the commons—external costs. In this case, everyone in society is harmed by the price changes induced by the issue of fiduciary media. These external costs are not taken into consideration by the banks that try to exploit the profit opportunities, because the property rights are not properly defined and defended by the legal system.

Yet as Huerta de Soto points out, there is one important difference between the two. In Hardin's analysis, there is virtually no limit in the exploitation of the "unowned," i.e., environmental properties without clearly defined ownership. However, for the fractional reserve banks, there is an important limit in the issuing of fiduciary media at the cost of the bank clients. This limit is set by the behavior of the other banks and their clients in a free banking system. More specifically, the credit expansion is limited since banks, via the clearing system, can force each other into bankruptcy.

Let us imagine a simple example. There are two banks: bank A and bank B. Bank A expands credit while bank B does not. Money titles issued by bank A are exchanged between clients of bank A and clients of bank B. At some point, the clients of  bank B or bank B will demand redemption for the money titles from bank A. Hence, bank A will lose some of its reserves, for instance, gold. As is every fractional reserve bank, bank A is inherently bankrupt; it cannot redeem all the money titles it has issued. Therefore, if bank B and its clients are demanding that bank A redeem the money titles to a degree which it cannot fulfill, Bank A must declare its bankruptcy.

Therefore, the clearing system and the clients of other banks demanding redemption set narrow limits to the issuing of fiduciary media. Banks have a certain incentive to restrict expansion of fiduciary media to a greater extent than their rival banks, with the final aim to force their competitors into bankruptcy and remain alone in the market. In other words, these banks naturally want to exploit the great profit opportunities offered by the improperly defined property rights, but they can only expand credit to the extent that the risk of bankruptcy is reasonably avoided. Competition forces them to check their credit expansion.

The question now concerns how the banks can increase the profits from credit expansion while keeping the risk of bankruptcy low. The solution, obviously, is to form agreements with each other in order to avoid the negative consequences of an independent and uncoordinated credit expansion. As a result, the banks set a combined policy of simultaneous credit expansion. These policies permit them to keep their solvency, to maintain their reserves in relation to one another, and to make huge profits.

Therefore, not only does the tragedy of the commons predict the exploitation and external costs of vaguely defined private property, it also explains why there are great forces in a free-banking system to form agreements, mergers, and cartels. However, even with the forming of cartels, the threat of bankruptcy still remains. In other words, the incentive to force competitors into bankruptcy still remains, resulting in the instability of the cartels.

Yet, even in the most comfortable scenario for the banks, i.e., the installation of a central bank and fiat money, there remains a limit which Huerta de Soto does not name: the risk of a hyperinflation. As Rothbard states, "With fiat money established and gold outlawed, the way is clear for full-scale . . . inflation. Only one very broad check remains: the ultimate threat of hyper-inflation, the crack-up of the currency."4 Therefore, it must be argued that Huerta de Soto's analogy of fractional reserve banking and the tragedy of the commons is still not perfect.

In other words, even with the creation of a central bank, there is still a check on the exploitation of private property. In an ideal "tragedy of the commons" situation, the drive is to exploit ill-defined property as fast as possible, to forestall the exploitation others can make. However, even with the existence of a central bank that guarantees their solvency, it is not in the interest of the fractional reserve banks to issue fiduciary media as quickly as possible. To do so could lead to a runaway hyperinflation.5 The exploitation of the commons must therefore be stretched and implemented carefully. Nevertheless, Huerta de Soto's analogy is very helpful in grasping the incentives, dynamics, and nature of a fractional reserve banking system.

Moreover, his analysis brings up the case for some revisionism concerning the question of who is the true father of the concept of the "tragedy of the commons." As mentioned earlier, Huerta de Soto argues that Garrett Hardin is not the first to describe such a concept, but that Ludwig von Mises had described it 28 years earlier.

Indeed, Mises shows in Nationalökonomie that the legal conceptions of property often do not follow the social function of private property. When property rights are not defined rigorously, the property owner "will not bother in his planning about all the effects of his action. He will disregard those benefits which do not increase his own satisfaction and those costs which do not burden him."6

Hence Garrett Hardin should only be considered the father of the phrase "tragedy of the commons" but not of the concept itself. In fact, as shown in the passage above, 28 years earlier, the concept was fully and more systematically stated by Ludwig von Mises as one part of the more general problem of insufficiently defined property rights. And with Huerta de Soto's analysis of fractional reserve banking, we find that the concept and term of the tragedy of the commons becomes a very important contribution to Austrian economics.
Author: