GET NEWS AND ARTICLES IN YOUR INBOXPrint
A
A
Home | Mises Library | Cash for Clunkers: A Personal Look

Cash for Clunkers: A Personal Look 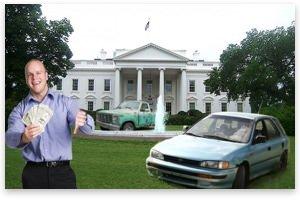 In a desperate attempt to assure Congress, and weary voters, that Keynesian stimulus spending still works, President Obama recently revealed a jobs initiative aimed at jump-starting the economy. Surprisingly enough, the econometric models that calculated that the first stimulus program would keep the unemployment rate below 8 percent were inaccurate. This wasn't a surprise to Austrians. But then again, neither was the housing bubble. Government stimulus spending is often short-lived and inefficient at producing sustainable growth past the next election cycle. Keynesian "prime pumping" is no better than an expensive sugar high.

With Obama crisscrossing the country trying to convince the public to go along with half a trillion dollars more in new spending, this is a prime opportunity to look back at one stimulus program in particular and the disastrous consequences it brought about.

The Car Allowance Rebate System, better known as "cash for clunkers," was a $3 billion federal-government program aimed at incentivizing Americans to trade in their current vehicles for ones with better fuel efficiency. The program provided a $4,500 rebate for each car that qualified. The program lasted from July 24, 2009, to August 25, 2009. According to a spokesman for the Department of Transportation, "cash for clunkers" was responsible for 250,000 auto sales in the first four days of the program's implementation. The auto-sales-analyst website Edmunds.com estimated that each vehicle sold due to "cash for clunkers" cost taxpayers $24,000.

While the failure of "cash for clunkers" has been documented, an outside, macroeconomic view of the program misses the real effect such stimulus efforts have on the lives of individuals. Thus I am sharing my own personal experience with "cash for clunkers."

In the summer of 2009, I started working at a Hyundai car dealership in Harrisburg, Pennsylvania. Being a college student on summer break, I took the part-time position of detailer/reconditioner. My job was cleaning and preparing newly sold cars. I started in the month of May and prior to the implementation of "cash for clunkers," sales were steady. On average, three to four new cars were sold on weekdays.1 On Saturdays, about six to seven new cars were sold. By law in Pennsylvania, car dealerships must remain closed on Sundays — clearly another case of government knows best.

Once "cash for clunkers" went into effect, new-car sales shot up. Weekday average car sales increased to Saturday levels. Saturdays became a zoo with close to ten new cars being sold throughout the day. With so many car sales, I never had any downtime those weekends. Normally the dealership would close at 8 p.m. unless there was a pending sale. It was normal to stay until 10 or 11 p.m. on the days "cash for clunkers" was in effect, as customers waited for approved credit applications and cars needed to be cleaned.

From the perspective of immediate consumption, "cash for clunkers" was an astounding success. Working so many consecutive hours provided a substantial boost to my paycheck. The car salesmen increased their commissions. The dealership was very profitable. But like all government stimulus efforts, this effect was short-lived.

Around the time "cash for clunkers" ended, I started the fall semester. I still returned to work on Fridays and Saturdays but sales began to slow down dramatically following the program's end. Throughout September, Saturday sales fell with only four to five new cars sold each day. From what I heard, weekday sales had slowed down significantly. During October, I was lucky to clean two or three newly sold cars on a Saturday. Some Saturdays went by in November with zero cars sold. Car salesmen began to be laid off. The assistant manager of the dealership was let go, as were many of the mechanics and staff running the automotive-parts department. Because I only worked a day and a half a week and was paid a dollar an hour less than the other experienced detailers, I was kept around. Once December hit, the dealership finally shut down for good. It was quite the Christmas present.

The purpose of government stimulus spending is to goose the economy by making up for a lack of aggregate demand. Consumers aren't spending enough, so bureaucrats must pick up the slack, or at least that's what Keynesian proponents assert. This is outside the natural working order of an economy, however. Consumers and businesses don't spend due to a number of factors, including what Robert Higgs calls "regime uncertainty" and a lowered time preference for saving and future consumption.

So while "cash for clunkers" accelerated consumption in the month of August, it left a gap in demand following the program's demise. As one car salesman put it, "cash for clunkers took all the demand that could have been spread out over the fall and moved it within August."2

A shifting of demand wasn't the only flaw in "cash for clunkers." In a scene right out of Lord of the Flies, all of the cars accepted for the program were required to be rendered undrivable. This involved the use of a chemical compound known as sodium silicate to be applied to the engine. With the supply of used cars decreasing by about 700,000, the price of a used car has since gone up.

Now I must be honest, "cash for clunkers" was not the sole reason the dealership went out of business. There were internal problems with management and customer satisfaction wasn't exactly at record levels.3

Regardless, witnessing the effects of "cash for clunkers" showed just how shortsighted Keynesian stimulus programs really are. Government is incapable of wealth creation; it only alters consumption and time preference with spending programs financed by squandered funds and directed toward appeasing special interests.

In the end, there was a positive and ironic consequence of the poor economic policy known as "cash for clunkers." On those November weekends when there was little activity, I read much of Ludwig von Mises's phenomenal treatise Socialism: An Economic and Sociologic Analysis on the recommendation of a friend while waiting for cars to be sold. It was my first exposure to the work of Mises and the Austrian School of economic thought.

The rest, including the wreckage left by government stimulus efforts such as "cash for clunkers," is history.