The Case against Raising the Debt Ceiling 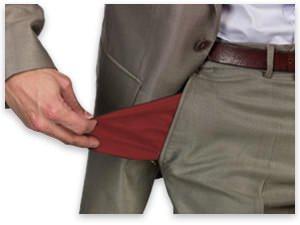 06/09/2011Robert P. Murphy
A recent NPR story on the debt ceiling seeks to correct the American public's "misunderstanding" of the issue. But as we'll see, whether through ignorance or deception, the analyst on whom the story relies makes claims about the debt ceiling that are simply not true. It turns out that the public's gut reaction to politicians' piling on ever more red ink is right after all.

The opening hook of the story — which, remember, is seeking to correct how poor American rubes think about these difficult issues — left me speechless:

Despite all the hand-wringing over raising the federal debt limit, and the prickly debate between Democrats and Republicans, there's some confusion about what it actually means. A recent Pew Research Center poll found that 48 percent of Americans believe raising the limit would lead to more government spending and higher debt. It's a figure that, according to many experts, reflects public misunderstanding.

"The deficit and the debt have become big issues, and it's largely a proxy for concern with the economy," Andrew Fieldhouse, federal-budget-policy analyst for the Economic Policy Institute, told The Root. "People are under financial strain, so when they see a number like [the debt limit of] $14.3 trillion, they expect the government to act as frugally as they are. But it's a false comparison. We can't choose not to raise it." (emphasis added)

I admit that the Pew Research Center poll annoyed me, but for the opposite reason. Why didn't 100 percent of Americans think that a higher debt ceiling would lead to a higher debt? How can anyone possibly deny that? That's the whole point of raising the ceiling after all — you want to increase the debt above the existing ceiling.

Now the other half of the claim, namely that raising the government-debt ceiling would lead to more government spending, doesn't follow by definition. For this claim, we just need to use a little common sense and knowledge of how politicians have behaved throughout recorded history.

The so-called experts who deny the link between raising the debt ceiling and increased government spending have in mind that Congress makes spending decisions and then separately authorizes the Treasury to borrow money to fund it. Even here, the 48 percent of Americans are right, and the NPR story itself agrees with them (though the author doesn't realize it).

How do I know that? Because later in the story, it scares the reader with the consequences of not raising the debt ceiling. The story lists nine things that the reader needs to know about the issue. Here's number six:

6. Without a raise of the debt ceiling, certain things just won't get paid.

"If the U.S. Treasury is out of borrowing authority, as bills come to it, it cannot pay all of them," says Fieldhouse, explaining that there's not enough revenue to repay creditors. Theoretically, Medicare, Social Security, military paychecks, veterans' benefits, unemployment benefits and tax refunds would all be interrupted. "The federal government would cease to function the way it's supposed to in every sense."

So there you have it. The NPR story opens by shaking its head that 48 percent of Americans think raising the debt ceiling would (a) lead to a bigger debt and (b) lead to more government spending. We can all agree that (a) is true by definition. And for (b), the NPR story itself agrees that without raising the ceiling, "certain things just won't get paid." So those 48 percent of Americans were on to something, notwithstanding the "experts" who disagree.

Running Up a Bigger Debt to Keep Down Interest Rates?

Throughout the story — and this also suffuses the entire public debate on the issue — the writer conflates two different things: raising the debt ceiling and servicing existing debt. Treasury Secretary Geithner and others keep arguing as if failure to raise the debt ceiling necessarily means the government will default on outstanding Treasury interest payments, but that's simply not true. The government can refuse to raise the debt ceiling while continuing to service preexisting debt. Therefore, it's nonsense when the NPR article warns that

2. Not raising the debt ceiling would make the national debt worse.

If the government is unable to borrow and keep paying for its obligations, then the federal debt, and any future borrowing, will accrue higher interest rates. In other words, we would end up owing more money than we would if the issue were confronted by raising the debt ceiling. "You can't wish away the debt of the United States," says Fieldhouse.

"Much to the chagrin of the so-called experts, a sizable portion of the American public can smell a rat."

Debt service currently consumes about one-sixth of incoming revenues (not spending). So if the government would simply cut spending elsewhere, it would still have plenty of cash coming in the door with which to pay existing bondholders. If the government actually put in place a serious plan to balance the budget, while not jeopardizing interest payments, there is no reason for interest rates to go up. In fact, it would be a signal that Uncle Sam was more likely to pay off his debts, as he capped the total debt.

Only in the political realm could it have ever become a standard talking point to claim that we need to go deeper into debt to reassure our creditors that we will pay them back.

Do We Need to Raise Taxes?

The NPR story and its alleged expert go on to explain why cutting spending is no solution to stop the red ink:

Republicans want $2.4 trillion in budget cuts in exchange for raising the debt ceiling. "You can't feasibly cut spending by enough to avoid a debt-ceiling increase, and you can't balance a budget simply by cutting spending," Fieldhouse says of the drastic proposals being pushed, adding that the government will have to raise revenue. But he says that raising the debt ceiling should not be contingent on any long-term deficit plan, no matter the approach. "Congress operates very slowly, and we're in a hyperpolarized period in our politics. You cannot expect Congress to resolve long-term budget problems between now and the beginning of August."

As I pointed out in a previous article, if the government merely returned to its 2003 spending levels, then the current revenue stream would be enough to pay for everything — including interest on existing debt. I personally don't remember the country falling apart in 2003 from lack of federal-government expenditures.

Admittedly, it would be tough for Congress to slash about $750 billion in spending between now and the end of September (when the fiscal year ends), which is what it would take to live within its means.

There is another option that could be used to buy time: sell off assets. This is what any private-sector organization would do if it wanted to start digging out of a massive debt problem. In this article I rattled off more than $1 trillion in highly liquid assets that the federal government currently owns and should return to the private sector in any case. Doing so right now would allow the Congress more time to make the necessary cuts in spending without raising taxes or the debt ceiling.

Much to the chagrin of the so-called experts, a sizable portion of the American public can smell a rat: they know that raising the debt ceiling is not needed to avoid calamity, and they know it would just let the politicians continue to waste our money.