Capitalism at the Farm Stand 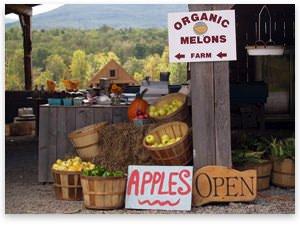 I laugh to myself every time I pull up to the little farm stand to pick up my weekly share from the Community Supported Agriculture program. I see a hilarious irony in the bumper stickers on the cars, proclaiming the social consciousness and leftist orientation of my fellow CSA members. I chuckle when I see the variety of reusable shopping bags, each proclaiming some message about how they're saving the planet "one bag at a time."

As I stand, filling the provided plastic (and supposedly nonreusable) grocery bags, I can barely hide my amusement. I am engaging in an enterprise that is the essence of pure capitalism while surrounded by those to whom the very word "capitalism" is one of the greatest of obscenities. It is voluntary exchange; it is a relationship where everyone feels as if they have won. Isn't that the essence of the free market?

To join a Community Supported Agriculture program, you buy a share of the farm's produce each season, which entitles you to a weekly box of locally grown vegetables and fruit. In a sense, members are not purchasing produce per se, but the rights to a certain proportion of produce should it be successfully delivered. It is more analogous to buying mineral rights or investing in stock for the dividends.

Most CSAs endeavor to grow without a lot of chemical pesticides and fertilizers, which makes CSAs extremely popular with environmentalists and others of the Left. They think they are doing battle with capitalism and corporate greed; I say it is a pure and beautiful example of a market exchange. They are acting like capitalists, even if they don't know it. To quote one of my favorite lines from Bourbon for Breakfast, "Capitalism is so darn good at what it does that it can even bamboozle muddleheaded socialists to cough up money for its products; that's wonderful" (p. 60).

The evidence of this is found in the details of the exchange. I pay $275 per season for a "medium share," which is more than enough for my family of four. The season lasts roughly 15 weeks, but can be shorter or longer depending on weather. This means I pay about $18 per week for more than ten pounds of produce; an average of less than $2 per pound. If you go and peruse the grocery store, you'll find that fresh produce generally costs more than this — and "organics" are significantly higher — while the quality and flavor is completely inferior.

The farm gets an infusion of capital at the beginning of the growing season when they most need it, a guaranteed market for a proportion of their goods, and an opportunity to advertise and sell other items not included in the CSA, such as milk and beef. Additionally, and perhaps most importantly, in the event of crop failures, there is shared risk between the farmer and the consumer. If they have a bad year with some particular crop, then you receive less; if they have a bumper crop, you are given more than you can possibly use. A few seasons ago, we were getting three or four quarts of strawberries a week; more than we could possibly consume, even with my daughter eating half a quart on the way home from the farm stand.

The consumer receives better-tasting produce at a lower price than can be had elsewhere. Additionally, for those who care about such things, they are purchasing more than just vegetables: they are purchasing the air of superiority and ecofriendly street cred that comes from shunning the corporate grocery store and sharing in something that they believe to be one step away from a hippie commune. That reality doesn't support such a conclusion is immaterial; if we are driven to act, even based upon some imaginary construct, we are still acting in accordance with market principles. It's an example of the Misesian idea that all human action is an effort to relieve some discomfort about the way things are.

Rather than striking a blow at the evils of the free market, CSA members exemplify voluntary exchange in its purest form. I and the farmer "beat the market" in this transaction, largely because of the direct nature of the buying and selling. I walk away from the exchange having purchased produce at a lower price by accepting a little bit of risk, while the farmer, having cut out the wholesaler, walks away having sold the fruit of his labor at a higher price.

Additionally, I purchase the satisfaction of knowing that the "muddleheaded socialists" loading up and comparing their reusable shopping bags are unwitting participants in a market economy that they claim to reject. For me, that satisfaction alone is worth almost the price of membership. The vegetables are just a bonus.