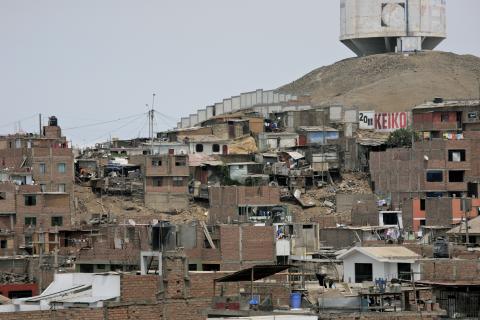 Last year, my wife and I traveled to Guatemala City in Central America to adopt a baby girl.  While Guatemala City is a bustling, well-planned metropolis with hard-working people, modern amenities of life, shopping malls, fast-food restaurants, and freeways, it is also a major study in contrasts.

At 6 a.m. on weekday mornings, thousands of people are driving to work at the modern downtown office buildings.  At the same time, however, a line of Guatemalans who wish to receive work visas to enter the United States stretches around the large U.S. Embassy.  These folks are not political dissidents, nor are they seemingly destitute or malnourished.  The paradox is quite real: In this beautiful land that seems to be blessed with natural resources and hard-working people, poverty appears to be the norm.

Despite the fact that economists are blessed with wonderful analytic tools, they have for the most part wrongly explained why so much of the Third World is so poor.  They have looked to explanations such as political oppression, culture, rapacious capitalism, socialism, and political corruption.

Hernando de Soto, president of the Institute for Liberty and Democracy in Lima, Peru, and author of the acclaimed The Other Path (1990)—in which he investigates the "informal sector" of Peru’s economy—has taken a different approach in his new book, The Mystery of Capital.  Instead of depending upon the same useless explanations that economists and "anti-poverty" activists have given us, de Soto looks to property and capital.  In this book, he goes into a very detailed explanation of why Third-World nations have not shared in the general prosperity of capitalism that characterizes the Western world and some Asian nations—even though capital is available throughout the world.

I must admit that as I read this book, it seemed that "the scales fell" from my own eyes, as he demolished one Third-World myth after another.  How could people who are supposed to know these things—even those who have lived in the Third World—have been so wrong?

According to de Soto, the poor of Third-World countries are not victims of rapacious capitalism, but rather are wronged by the lack of property rights and with outright bureaucratic barriers that prevent the poor from gaining access to capital.  Thus, they languish in the vast "informal sectors," or underground markets, that so characterize much of the Third World.

The elite of Third-World nations, he writes, have been able to use the Western systems of laws and property rights to participate in ownership of capital, which is why they are prosperous.  Using Braudel’s (1992) analogy of the "bell jar," de Soto writes that the elite are inside this "jar" and take advantage of the blessings of capitalism, while the poor, who are "outside the jar," are left out.

This also helps to explain the phenomenon of why many people from the Third World seem to do well economically speaking only after they have left their home country and settled in the West.  Therefore, it is not capitalism that creates poverty in Third-World nations, but rather the fact that the poor are not able to partake in the capitalist system because of legal barriers.  Obviously, de Soto directly contradicts the claim made by leftists that the seemingly intractable poverty that characterizes so much of the world’s population is caused by capitalism both in the West and the Third World.

De Soto is hardly a wide-eyed idealist.  He and his staff spent nearly five years painstakingly researching property holdings in numerous Third-World nations before he wrote this book.  As the book jacket says, "Their findings are dramatic.  The data they have collected demonstrate that the world’s poor have accumulated all the assets needed for successful capitalism.  The value of their savings is immense: many times all the foreign aid and investment received since 1945."

According to de Soto, the assets of the poor in those nations amount to "dead capital."  In other words, because of problems dealing with legal ownership of assets, the poor cannot transform what they own into capital through the process of offering collateral needed for business startups and expansions.  Instead, the vast majority of the world’s poor operate in the underground economies of small-scale enterprises, squatter "settlements," and payoffs to bureaucrats and the police.

The legal barriers to setting up legal businesses in the Third World are enormous, he writes.  In The Other Path, de Soto describes the experience where he and his "team" tried to launch fictitious legal businesses in the United States and in Lima, Peru.  Working six-hour days, the team managed its U.S. approval in less than a day.

In Lima, however, the experience was much more cumbersome. The red tape was so prevalent and thick that acting legally (filling out forms and receiving official approval) took 289 days and $1,231, which is much more than most Peruvians can begin to afford.  Therefore, according to de Soto, most of the Third-World poor disappear into the black market, solving one problem but creating others that condemn the poor to a much lower standard of living than they would enjoy in an economy in which property rights are easy to establish.

De Soto is not satisfied with just criticizing the system, however.  He wants solutions that will actually work for poor people, although he is not naïve enough to believe that the passage of new laws will solve the problem.  Rather, he says that this is a "political challenge," one that will take many years.  Moreover, he says that this process is "evolutionary"—not one that simply occurs because a majority of legislators say it should be so.  He writes:

Why do you need a political strategy today?  Who could possibly be against removing a legal apartheid that is so obviously unjust?  Few, in  fact, would dispute the need for reform.  But a tiny, powerful minority will intuit that reform is bound to perturb their little niches, and they will resist silently and insidiously . . . Opening up capitalism to the poor will not be as simple as running a bulldozer through garbage.

For example, the Third-World elite who benefit from Western-style capitalism resist extending such legal shelter to the poor because they wrongly believe that doing so will undermine their own economic success.  De Soto, however, says that giving the poor access to capital would actually make those nations more free and more politically stable, and would give the wealthy elite more freedom to enjoy their own wealth.  (For example, middle- and upper-class people in Guatemala City and other Third-World locales surround their homes with walls topped with razor wire or broken glass in order to protect their property.)

An example of the evolution of property rights, De Soto writes, can be found in U.S. history, and especially the development of the American West during the nineteenth century.  Settlers moving to the West found many legal barriers to owning title to land, and it took more than one hundred years to develop a workable system of property rights that nearly everyone respected and that judges would honor.

Unfortunately, de Soto writes, Westerners are nearly as unfamiliar with the genius of their system as are the Third-World poor.  He writes:

Why has the genesis of capital become such a mystery?  Why have the rich nations of the world, so quick with their economic advice, not explained how indispensable formal property is to capital formation?  The answer is that the process within the formal property system that breaks down assets into capital is extremely difficult to visualize. . . . The only way to see it is from outside the system—from the extralegal sector—which is where my colleagues and I do most of our work.

There is much more to this book than what I have described in this brief review.  The bottom line is that it is very much worth reading, and Austrians and fellow travelers will especially find it to be pertinent in how they view the modern economy.  Unlike their "wayward brethren" from the economic mainstream, Austrians have not wavered in stressing the importance of private property rights.  Ludwig von Mises, in his "Socialist Calculation Debates" with Oskar Lange in the 1930s, noted that the economic calculation needed to ensure a large-scale economy ran smoothly was not possible in the absence of private property.

Furthermore, when read in conjunction with other Austrian literature like Human Action or Man, Economy, and State, Mystery has much explanatory power.  One hopes to see this book on the shelves of everyone who subscribes to the Austrian point of view.