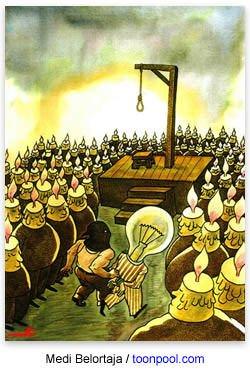 Petition of the Manufacturers of Candles, Waxlights, Lamps, Candlelights, Street Lamps, Snuffers, Extinguishers, and the Producers of Oil, Tallow, Resin, Alcohol, and, Generally, of Everything Connected with Lighting

To the Members of the Chamber of Deputies.

You are on the right road. You reject abstract theories, and have little consideration for cheapness and plenty. Your chief care is the interest of the producer. You desire to protect him from foreign competition and reserve the national market for national industry.

We are about to offer you an admirable opportunity of applying your — what shall we call it? — your theory? No; nothing is more deceptive than theory — your doctrine? your system? your principle? But you dislike doctrines, you abhor systems, and as for principles you deny that there are any in social economy. We shall say, then, your practice — your practice without theory and without principle.

We are suffering from the intolerable competition of a foreign rival, placed, it would seem, in a condition so far superior to ours for the production of light that he absolutely inundates our national market with it at a price fabulously reduced. The moment he shows himself, our trade leaves us — all consumers apply to him; and a branch of native industry, having countless ramifications, is all at once rendered completely stagnant. This rival, who is none other than the sun, wages war mercilessly against us, and we suspect that he has been raised up by perfidious Albion (good policy nowadays), inasmuch as he displays toward that haughty island a circumspection with which he dispenses in our case.

What we pray for is that it may please you to pass a law ordering the shutting up of all windows, skylights, dormer-windows, outside and inside shutters, curtains, blinds, bull's-eyes; in a word, of all openings, holes, chinks, clefts, and fissures, by or through which the light of the sun has been in use to enter houses, to the prejudice of the meritorious manufactures with which we flatter ourselves that we have accommodated our country — a country that, in gratitude, ought not to abandon us now to a strife so unequal.

We trust, gentlemen, that you will not regard this our request as a satire, or refuse it without at least first hearing the reasons which we have to urge in its support.

And, first, if you shut up as much as possible all access to natural light, and create a demand for artificial light, which of our French manufactures will not be encouraged by it?

If more tallow is consumed, then there must be more oxen and sheep; and, consequently, we shall behold the multiplication of meadows, meat, wool, hides, and above all, manure, which is the basis and foundation of all agricultural wealth.

If more oil is consumed, then we shall have an extended cultivation of the poppy, of the olive, and of rape. These rich and soil-exhausting plants will come at the right time to enable us to avail ourselves of the increased fertility that the rearing of additional cattle will impart to our lands.

Our heaths will be covered with resinous trees. Numerous swarms of bees will, on the mountains, gather perfumed treasures, now wasting their fragrance on the desert air, like the flowers from which they emanate. Thus, there is no branch of agriculture that shall not greatly develop.

The same remark applies to navigation. Thousands of vessels will proceed to the whale fishery; and in a short time, we shall possess a navy capable of maintaining the honor of France, and gratifying the patriotic aspirations of your petitioners, the undersigned candlemakers and others.

But what shall we say of the manufacture of articles de Paris?1 Henceforth, you will behold gildings, bronzes, crystals in candlesticks, in lamps, in lustres, in candelabra, shining forth in spacious showrooms, compared with which, those of the present day can be regarded but as mere shops.

No poor resinier from his heights on the seacoast, no coal miner from the depth of his sable gallery, but will rejoice in higher wages and increased prosperity.

Only have the goodness to reflect, gentlemen, and you will be convinced that there is perhaps no Frenchman, from the wealthy coalmaster to the humblest vendor of lucifer matches, whose lot will not be ameliorated by the success of this our petition.

We foresee your objections, gentlemen, but we know that you can oppose to us none but such as you have picked up from the effete works of the partisans of Free Trade. We defy you to utter a single word against us which will not instantly rebound against yourselves and your entire policy.

You will tell us that, if we gain by the protection we seek, the country will lose by it, because the consumer must bear the loss.

You have ceased to have any right to invoke the interest of the consumer; for, whenever his interest is found opposed to that of the producer, you sacrifice the former. You have done so for the purpose of encouraging labor and increasing employment. For the same reason you should do so again.

But, again, you may say that the producer and consumer are identical. If the manufacturer gains by protection, he will make the agriculturist also a gainer; and if agriculture prospers, it will open a vent to manufactures.

Very well! If you confer upon us the monopoly of furnishing light during the day, first of all we shall purchase quantities of tallow, coals, oils, resinous substances, wax, alcohol — besides silver, iron, bronze, crystal — to carry on our manufactures; and then we, and those who furnish us with such commodities, having become rich will consume a great deal and impart prosperity to all the other branches of our national industry.

If you urge that the light of the sun is a gratuitous gift of nature, and that to reject such gifts is to reject wealth itself under pretense of encouraging the means of acquiring it, we would caution you against giving a death-blow to your own policy.

Remember that hitherto you have always repelled foreign products, because they approximate more nearly than home products the character of gratuitous gifts. To comply with the exactions of other monopolists, you have only half a motive; and to repulse us simply because we stand on a stronger vantage-ground than others would be to adopt the equation + × + = − ; in other words, it would be to heap absurdity upon absurdity.

Nature and human labor cooperate in various proportions (depending on countries and climates) in the production of commodities. The part nature executes is always gratuitous; it is the part executed by human labor that constitutes value and is paid for.

If a Lisbon orange sells for half the price of a Paris orange, it is because natural, and consequently gratuitous, heat does for one what artificial, and therefore expensive, heat must do for the other.

When an orange comes to us from Portugal, we may conclude that it is furnished in part gratuitously, in part for an onerous consideration; in other words, it comes to us at half price as compared with those of Paris.

Now, it is precisely this semigratuity (pardon the word) that we contend should be excluded. You say, How can national labor sustain competition with foreign labor, when the former has all the work to do, and the latter only does one-half, the sun supplying the remainder?

It amounts to a quarter, a half, or three-quarters of the value of the product, when the foreigner only asks us for three-fourths, a half, or a quarter of the price we should otherwise pay. It is as perfect and complete as it can be when the donor (like the sun in furnishing us with light) asks us for nothing.

The question, and we ask it formally, is this: Do you desire for our country the benefit of gratuitous consumption or the pretended advantages of onerous production? Make your choice, but be logical; for as long as you exclude, as you do, coal, iron, corn, foreign fabrics, in proportion as their price approximates to zero, what inconsistency it would be to admit the light of the sun, the price of which is already at zero during the entire day!