GET NEWS AND ARTICLES IN YOUR INBOXPrint
A
A
Home | Mises Library | Is Budget Austerity Modern-Day Hooverism? 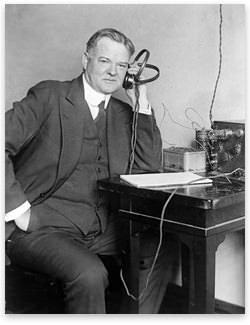 With the debate over the federal government's budget as the hot topic of the day, the proponents of big spending have gone into overdrive with their mantra that Herbert Hoover was a small-government liquidationist. As often as this myth is repeated, it's important to show that it is wrong: Herbert Hoover was a big-government man who did not trust the free market. Ironically, I can use the evidence provided by some of these progressive writers themselves to demonstrate this point.

Was Hoover a Fan of Budget Cuts?

There are numerous examples from recent weeks, but here are three good examples of pundits trying to link the current drive for budget cuts with the worldview of Herbert Hoover:

First we have Richard Rapaport in Salon, contrasting the philosophies of Herbert Hoover and Franklin D. Roosevelt:

The physical and geographical dissimilarities between the Hoover Institution and Roosevelt Library make a solid gantry for any examination of the fundamental political and personal antagonisms between Franklin Roosevelt and Herbert Hoover and how succeeding generations of their kith have hefted the political cudgel to carry on that fight. Friendly acquaintances early in their careers, the two men became the bitterest of rivals, opponents and ultimately enemies in what was arguably the most momentous clash of American political ideology in the 20th century. In the 1932 presidential campaign, the distinctions could not have been more starkly drawn: New York versus California, city versus frontier, Episcopal urbanity versus Quaker simplicity, yachting versus fly-fishing — and, most important, government intervention versus economic hands-off.

For exhibit B, we have economist L. Randall Wray, who wrote a blog post with a title that leaves nothing to the imagination: "Modern Budget Cutting Hooverians Want a Return to the 1930s." Wray informs us,

Our modern Hooverians would like to return to the "good old days" of President Hoover, when the government was smaller and both unwilling and unable to offset the swings of private investment spending. Back then, when investment collapsed unemployment did not go to 9 or 10 percent, it went all the way to 25 percent. Hooverian economics would turn back the clock to ring in another Great Depression with the same old pre-Keynesian ideas that failed us in the 1930s.

Our last example is my adversary Paul Krugman, who wrote in a recent op-ed,

"Liquidate labor, liquidate stocks, liquidate the farmers, liquidate real estate." That, according to Herbert Hoover, was the advice he received from Andrew Mellon, the Treasury secretary, as America plunged into depression. To be fair, there's some question about whether Mellon actually said that; all we have is Hoover's version, written many years later.

But one thing is clear: Mellon-style liquidationism is now the official doctrine of the G.O.P.

These examples (and countless others) underscore one of the most pervasive myths of American history: we are taught that the stock-market crash of 1929 turned into the Great Depression because Herbert Hoover sat in the White House fondling a copy of the Constitution while the country begged for federal intervention.

This is hogwash. Herbert Hoover did more to intervene in the peacetime economy than any prior president. Indeed, he set in motion all of the things that FDR later did in the New Deal. I argue in my book on the subject that Herbert Hoover bears responsibility for the Great Depression because he was such an interventionist. When FDR came into office, he merely upped the ante on everything Hoover had started, and that's why the nation stayed mired in depression for another decade.

A Major Problem with the Official Version of History

On the face of it, there's something very fishy with the official version of history regarding the Great Depression. If the explanation for the worst economic calamity the country ever faced is that Herbert Hoover believed in small government and didn't lift a finger to help, then why did it take so long for the Great Depression to occur?

After all, the US had had serious depressions (or "panics," as they called them) earlier in its history. It's not as if the presidents at the helm during those crises had implemented Social Security or FDIC, and then Herbert Hoover came along and dismantled them. No, generally speaking, the federal government's powers grew over the decades from the country's founding. So to explain the Great Depression by pointing to Hoover's reluctance to intervene is like explaining the sinking of the Titanic by pointing to gravity.

In contrast, my own explanation doesn't suffer from this problem. I claim that Hoover's unprecedented (at the time) interventions exacerbated the fallout from the stock-market crash — in particular his insistence that businesses prop up wages even as other prices fell sharply. That is a major reason that unemployment increased so much more in the early 1930s, even though deflation (both in monetary terms and prices) was more severe in the earlier 1920–1921 depression.1

In other words, it's quite easy for the Austrian to explain why the United States didn't experience the horrors of the Great Depression in earlier crises: those presidents didn't foolishly intervene as much as Hoover and FDR did. They largely left the market to its own devices, and the economy recovered much more quickly than it did in the 1930s.

Who Could Possibly Claim That Hoover Was a "Big-Government" Man?

In a previous article I laid out the figures of government spending to show that Herbert Hoover was no fan of austerity. (David Friedman has made the point as well, to rebut the Hoover myth as it was propounded by another NYT writer.) In the present article, I'll make the point using literary sources.

First of all, let's go back to Krugman's discussion of Treasury Secretary Andrew Mellon and his infamous advice about liquidation. To his credit, Krugman acknowledges that this quote comes from Hoover's own memoirs, written well after the fact. But to his discredit, Krugman fails to notify us that on the very next page of Hoover's memoirs, after he explains the liquidationist advice he got from his treasury secretary, Hoover wrote,

But other members of the Administration, also having economic responsibilities — Under Secretary of the Treasury Mills, Governor Young of the Reserve Board, Secretary of Commerce Lamont and Secretary of Agriculture Hyde — believed with me that we should use the powers of government to cushion the situation.2

If you read Hoover's memoirs in context, you see that his whole point in bringing up the Mellon doctrine was to tell his readers that he rejected the advice. Hoover was trying to show people (and of course I'm paraphrasing here), "Hey, I did everything I could to get us out of that awful downturn! You should have seen the crazy laissez-faire stuff my treasury secretary was recommending."

Don't Take Hoover's Word for It

We don't need to rely on Herbert Hoover's own proclamations of his big-government instincts, nor just the raw figures of government spending that I've outlined here and here. Ironically, I can quote from Rapaport's Salon article to make my case. The following quotation is a bit lengthy, but I promise you will not be disappointed:

Interestingly, in the decades leading up to the 1932 presidential campaign, Hoover wore the mantle of greatness with as much authority as Roosevelt. A renowned mining engineer and a self-made millionaire by 40, Hoover had become a household name for his work on the Commission for Relief in Belgium. … Between 1917 and 1919, Hoover also served as U.S. food administrator, virtual dictator of wartime American agricultural production. …

Hoover's abilities made him an exemplar of the utopian, ideology-free "master engineers" whose business skills were seen as the path to postwar prosperity. In 1920, Hoover seemed to his neighbor and fellow-Washington up-and-comer, Assistant Secretary of the Navy Franklin Roosevelt, just the man for that year's Democratic presidential nomination. "Hoover," Roosevelt told more than one friend, "is certainly a wonder, and I wish we could make him president of the United States."

In 1920, Hoover, who had stubbornly avoided party affiliation, finally declared himself a Republican, and was appointed commerce secretary in the new Harding administration. In the Cabinet, Hoover was regarded as a highly capable busybody. …

Hoover's failures were not for lack of effort. Despite popular conviction, he was no American Nero, fiddling inside the Oval Office while the country burned. Hoover funded public work and relief programs at then-unprecedented levels. He used the presidential "bully pulpit" as capably as anyone since FDR's late cousin, Theodore. Hoover jawboned businesses to prevent them from cutting workers' wages. He pushed through a moratorium on World War I-related German reparations. Hoover also encouraged the private sector to create its own self-help organizations, including the Federal Farm Bureau, National Business Survey Conference and National Credit Corporation.

Unfortunately, his good decisions were overmatched by the disastrous ones. In 1930, against the advice of leading economists, Hoover signed the Smoot-Hawley Tariff, effectively slaughtering international trade and devastating already distressed American agriculture and livestock production. Similarly debilitating was the 1932 Revenue Act, a tax-increase that led, disastrously, to a severe contraction of the money supply. By 1933, so little legal tender was in circulation that alternative "scrip" was circulated in many American towns and cities.

In the end, Hoover's belief in the power of volunteerism and reliance on the "wisdom of the market" simply didn't work. (emphasis added)

The above excerpt from Rapaport beautifully illustrates my observation that in the social sciences, believing is seeing. After telling us that Hoover was a "virtual dictator" in agriculture and an engineering busybody — whom Roosevelt himself thought would make a great president in 1920 — and that his disastrous decisions in office consisted of tax increases, Rapaport nonetheless describes Hoover as relying on the market.

One of the persistent myths of American history is that Herbert Hoover was a laissez-faire ideologue who did nothing to help the economy recover from Depression. On the contrary, Hoover was in many ways a "progressive" who believed the federal government could intervene to dampen the cruel vicissitudes of the wildcat free market.

If only Hoover had followed the hands-off policies of his predecessors, we would not today associate him with the worst episode in US economic history.