On the Brink of Inflationary Disaster Ever since Ben Bernanke began his massive infusions of money into the financial system, many analysts (including me) have been worried about the severe weakening of the dollar if and when the fractional-reserve-banking system magnified the initial injections severalfold.

Although the trend could reverse, data from the past two months suggest that the inflationary big one may be upon us.

Keeping the Genie in the Bottle

To understand the potential problem, we need to review some basic facts. Back in the fall of 2008, when Lehman collapsed and the entire financial system appeared in jeopardy, the Fed began bailing out investment banks through massive asset purchases and extraordinary lending operations. These activities rescued the major banks that would otherwise have gone bankrupt, by taking bad assets off their books (at inflated prices) and by propping up the new "market" price of the assets remaining on their books.

When the Fed buys an asset, it writes a check on itself. This action creates new electronic reserves in the banking system. For example, if the Fed buys $10 million in mortgage-backed securities from Joe Smith, then Smith will deposit the check in his own checking account. His bank will credit Joe Smith's checking balance by $10 million, but at the same time the bank's account with the Fed itself will rise by $10 million too.

At any time, regulations insist that commercial banks in the United States keep a minimum amount of reserves set aside in order to "back up" the demand deposits (think of checking accounts) of their customers. For example, if a commercial bank's customers think they have a total of $1 billion in their checking accounts, then the Fed's regulations force the commercial bank to keep (roughly) $100 million set aside in reserves. These reserves can consist of green pieces of paper stored in the commercial bank's vaults, or the reserves can be electronic entries showing how much the bank itself has on deposit with the Federal Reserve.

The following chart shows how much in new reserves the Bernanke Fed has pumped into the system in the last three years: 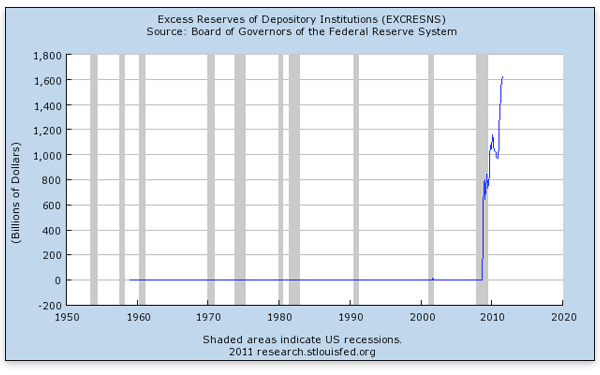 Notice that "excess reserves" are historically very close to zero. This reflects the tendency (assumed in textbook discussions of "open market operations") for commercial banks to quickly lend out any reserves they have, over and above their legally required minimum. Yet as the chart above clearly indicates, since the onset of the present crisis the commercial banks have not been making new loans. Instead, they have allowed the huge injections of new reserves to sit parked at the Fed.

There are several (possibly overlapping) explanations for this break from the past. Keynesians such as Paul Krugman argue that this was the predictable outcome during a liquidity trap. Proponents of MMT (modern monetary theory) argue that the economic textbook discussions have things upside down, and that banks are never constrained by reserves when deciding on making new loans. Quasi monetarists lament the Federal Reserve's decision in October 2008 to start paying interest on excess reserves — a policy whereby the Fed actually bribes banks not to make loans to their customers. Free-market guys like Mish (as well as some card-carrying Austrians) have argued all along that significant price inflation was never on the table, so long as the financial system worked through a painful process of deleveraging.

Regardless of their specific explanations for why commercial banks hadn't been lending out the trillion-plus in new reserves Bernanke created, just about every pundit agreed that this fact was a major reason that what seemed to be incredibly inflationary policies weren't leading to skyrocketing prices.

However, if the trend of the last months continues, that period of containment appears to be over. All of those pundits who hedged their predictions by saying, "So long as those reserves stay bottled up at the Fed …" may need to go back to the drawing board. Recent releases from the Fed show that the excess reserves are starting to leak out.1

The Fed's Latest Figures on Reserves

Here are the relevant figures from the Fed's latest (August 18) H.3 release:

The above data are consistent with the commercial banks finally beginning to lend out their excess reserves — something that they typically do, but (for various possible reasons) have not done during the current crisis.

To double-check our conclusions, we can show that demand deposits at commercial banks have grown sharply over the past few months, matching the aggressive growth exhibited back during the panicky days of late 2008: 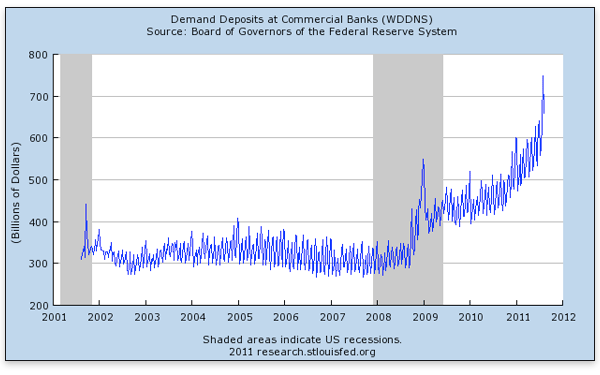 Moving From Money to Price Changes: Some Pitfalls

Before the reader runs to the gun store (or jumps out the window) because of impending price hikes, I should go over some caveats. First, we must always consider the supply and demand for money. Clearly in late 2008, but also in recent months, the general economic outlook was very bleak and this led households and firms to increase their desired holdings of money (as opposed to other liquid assets). Rather than viewing the banking system as pushing new money into the economy, some economists would look at the above chart and see people pulling new money into existence (through the magic of fractional-reserve lending).

A second nuance is to contrast relative with absolute price changes. During late 2008, the official consumer price index (CPI) was falling fairly rapidly. Therefore, even though it may have been true that Bernanke's money creation led to "rising prices," this tendency may have been masked by the underlying fall. The net result was only a modest increase in CPI during 2009, which led many critics of Bernanke to look like Chicken Littles. The following chart shows what happened to CPI over the last ten years: 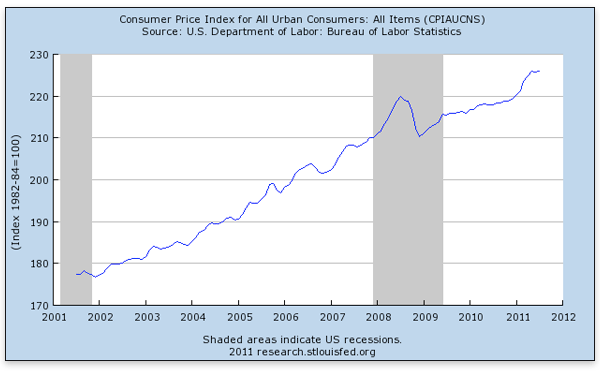 Note that in the above chart, we are not currently staving off a plunge in consumer prices, but in fact are following on the heels of a rather sharp surge in the official CPI.

A third caveat in our analysis is that (as good Austrians) we must remember that there are millions of different prices in the economy. The specific impact of money creation on various sectors can be very different, and operate on different time frames.

For example, during the present crisis, we had the Fed create more than a trillion dollars on behalf of rich investment bankers. At the same time, middle- and lower-class households were plagued by high unemployment, large debts, and underwater homes. In this environment, it's not surprising that the various rounds of "quantitative easing" went hand in hand with huge jumps in stock and commodity prices, but were muted in the retail sector.

Drawing on the Bureau of Labor Statistics' latest releases of the consumer and producer price indices, we see that once we leave the specific metric — "core inflation" — favored by Krugman and other prominent economists, we get a very different picture indeed of the trend in prices over the past year:

Austrian economists know to be wary of looking at financial data and drawing conclusions about what "must" happen. The future is always uncertain, the result of volitional human action.

It's also true that we have reason to be very cynical about the "official" data put out by the Federal Reserve and the Bureau of Labor Statistics.

Even so, my point is that the government's own numbers indicate that Bernanke's grace period may be ending. These trends might turn out to be a blip — only further observation will show — but we soon may see the Fed's "exit strategies" put to the test.