GET NEWS AND ARTICLES IN YOUR INBOXPrint
A
A
Home | Mises Library | Brazil: Victim of Vulgar Keynesianism 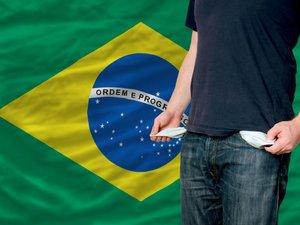 All Keynesian roads lead to stagflation. That was the case in Europe and in the United States in the 1970s when both stagnation and inflation hit the economies at the same time. Currently, this is the case in Brazil.

Since coming into power in 2003, the Brazilian labor government has religiously implemented the economic policy doctrine of growth by spending. Now, the country has fallen into stagnation with a recession looming while inflation is on the rise. All economic indicators flash red lights: from economic growth to inflation and the exchange rate, from productivity to investment and industrial production.

Once again, Keynesian policies have led to stagflation. Reality has finally set in. The illusion of easy wealth is shattered. The Keynesian wonder weapon has become impotent. The economic policy teams at the Ministry of Finance and the Central Bank have no notion what to do now. After all, they know of no other economic policy doctrine than to stimulate the economy by spending ever more. Yet with the government’s coffers empty and inflation high and rising, the policy tools of deficit spending and monetary expansion have run out of fuel. Favorable external conditions such as the China boom and high demand for commodities had benefited the Brazilian economy during the presidency of Luiz Inácio “Lula” da Silva. These external factors together with massive internal stimuli accelerated economic growth. With the end of the commodities boom and the slowing of economic growth in China, the external environment factors no longer helped when at the same time internal consumption hit the wall, as consumers had to scale back along with the government as the debt burden approaches its limit.

In early 2015, it became obvious that the country has lived in an illusionary world under the Labor Party over the past twelve years. Now it seems like a joke that President Lula once announced that Brazil’s economy was about to overtake that of the United Kingdom and from then on move upward on the ladder of the large economies. Yet when it was announced in 2007 that Brazil was to host the Soccer World Championship in 2014 and when in 2009 the Olympic Committee selected Rio de Janeiro for the Olympic Games in 2016, it seemed that the much-wanted international recognition of the president’s achievements had arrived. The jubilation at home was fully matched by the exuberance abroad about how Lula would lead Brazil into the twenty-first century.

Just as much as many Brazilians did not want to recognize, foreign observers, too, shut their eyes to the fact that the Brazilian Labor Party has been practicing one of the crudest forms of Keynesianism. The Brazilian kind of Keynesianism is deeply mixed with the Marxism of Michal Kalecki. In Europe and the United States remnants of sound economics survived at the onset of the “new economics,” and later on partially recovered classical and neoclassical principles. In Brazil there has been an almost complete victory of “Kaleckian Keynesianism” with most other types of macroeconomics cast aside.

Can the Government Turn Stones into Bread?

Even today, the Polish economist Kalecki is still held in high esteem at some of the most prominent Brazilian universities. The version of “Keynesianism” that he developed in the 1930s has become the leading paradigm for economic policymaking albeit this type of macroeconomics lacks any micro-foundation and is largely void of realistic content. The Kaleckian version of Keynesianism takes the macroeconomic symbols for real and by moving them around according to the basic rules of algebra, the model finally is brought to the conclusion that “workers spend what they earn,” while “capitalists earn what they spend” (as this theory was once summarized by Kaldor).

Kalecki and his Marxist followers consequently decided that when the state assumes the capitalist function, government could spend the country to wealth while workers would get their fair share as consumers. Even more so than Keynes, Kalecki’s gospel preached that its believers could turn stones into bread. Government spending for whatever purpose combined with mass consumption promised a most pleasurable way to prosperity. This promise has been the economic policy principle of the Brazilian Labor Party government over the past twelve years.

During much of the two presidential periods of da Silva from the beginning of 2003 to the end of 2010, the Kaleckian-Keynesian recipe seemed to work. The Brazilian government under the former trade union leader spent, the consumers consumed, and the economy grew. All the while, price inflation remained subdued and the unemployment rate fell. No wonder that President Lula enjoyed immense popularity during his two terms and that Lula’s Labor Party would remain in power when his handpicked successor won the elections for presidency in 2010 and in 2014.

Dilma Rousseff, however, a politician by trade and former urban guerilla fighter, had a hard time winning the elections. When running for her second mandate, dark clouds began to overshadow the still blatant optimism of the ruling party. In 2011, the economic growth rate began to fall. The government first brushed it away as a temporary dip, yet when the rate continued to decline even more in 2012, the government began to panic. With the election coming up in 2014, the government did what the Kaleckian-Keynesian recipe prescribes and accelerated even more its expansive policies. This may have won the election for her, but the price to pay came in high later on.

Now, in early 2015, disillusion has fully set in. People feel cheated by the false optimism of the government. The corruption scandal of the Brazilian oil company Petrobras together with the rapidly deteriorating economic conditions drove over a million of Brazilians to the streets on March 15 in protest against the government.

What many of the protesters fail to see, however, is that Brazil needs more than just a change of government. The country needs a change of mind. In order to get on to the path of prosperity, Brazil has to discard its prevalent economic ideology. Brazil has to get rid of its tradition of profligate government spending and easy money, Marxist-inspired state involvement in the economy, and the protectionism that had come with the adoption of Cepalism (the economic policy concept of the Economic Commission of Latin America). Not special circumstances lie at the heart of the current malaise, but wrong ideas about economic policy.

Brazil needs a huge dosage of economic liberalization to find its way out of the current crisis. Less state intervention and much more freedom of doing business must be the first steps. For this to happen a change of mind is needed. Brazilians must open up to an alternative beyond state capitalism. Brazil must embrace laissez-faire in order to prosper.

This task is tremendous and not much different from earlier elections, almost all parties currently represented in the Brazilian Congress belong to the left and the extreme left. There is neither a truly conservative nor an authentic pro-market political party. This situation is more than peculiar because, as surveys consistently show, most of the Brazilians locate their political orientation at the center-right and in favor of free markets.

The reason for this discrepancy lies in the fact that the left dominates higher education, particularly in the social sciences, economics, and law. It is from this group that most political activists come. When the military dictatorship ended in 1984, the university system fell under almost complete control by leftists of all kinds. This way, academic life is ideologically very different from the rest of the Brazilian society where common sense still has prevailed.

Fortunately, intellectual evolution is no longer largely dependent on academia. While the Kaleckian brand of Keynesianism and Marxism still dominates the universities, a strong libertarian movement is on the rise spearheaded by the Brazilian Mises Institute. Young people in particular flock to this site like the proverbial wanderer in the desert in the search for water. In the past, changes of mentality took decades and even centuries in order to unfold.

Nowadays, with the internet, ideas have a market place of their own with free access for all. It should be easy for the Brazilians to learn that it is not enough to be fed up with the present government, but it is high time to transform the country’s state capitalism into a free market system in order to prosper.