GET NEWS AND ARTICLES IN YOUR INBOXPrint
A
A
Home | Mises Library | Book Review: The Case Against Adolescence

Book Review: The Case Against Adolescence 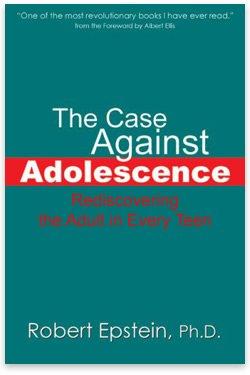 Tags BiographiesHistory of the Austrian School of EconomicsPhilosophy and Methodology

[Book Review: The Case Against Adolescence: Rediscovering the Adult in Every Teen by Robert Epstein • Quill Driver Books • 2007 • 490 pages]

In his book, Democracy: The God that Failed, Hans Hoppe argues that democracy and government have made people less farsighted and not as concerned with providing for ever-more-distant goals. Thus, society is tending toward decivilization. As Hoppe describes, adults are being turned into children. Children have very high time preferences, living "day to day and from one immediate gratification to the next," Hoppe explains. American society has essentially lengthened childhood by creating adolescence.

In a very provocative new book, The Case Against Adolescence: Rediscovering the Adult in Every Teen, psychologist Robert Epstein contends that when mammals reach puberty, they function as adults — except in America that is. Starting a hundred years ago, Americans gradually increased the age of adulthood to what many Americans now believe to be 26. You've heard, "30 is the new 20," and "50 is the new 30." Soon we will all be kids again.

Epstein argues effectively that American culture collaborates in artificially extending childhood through public schooling and labor laws. In most of human history, young people worked side by side with adults from their early teens with young women becoming wives and mothers. Early on, he fingers the labor unions as the culprits behind child labor laws. In 1881, the forerunner to the AFL-CIO made child labor a high priority: "We are in favor of the passage of laws in the several states forbidding the employment of children under fourteen in any capacity, under penalty of fine and imprisonment."

Of course, unions didn't want the competition from young workers who are likely smarter and more productive than older workers. Work by David Wechsler and J.C. Raven indicates that our highest mental age is in our midteens. According to Raven, "Apparently by the age of fourteen, a child's trainability has reached its maximum, while after the age of thirty, a person's ability to understand a new method of thinking, adopt new methods of working, and even to adapt a new environment, steadily decreases."

Of course today's teens don't act like they have the most brainpower in society. How could they? They are isolated in government schools away from adults and given no responsibilities — they are infantilized. Infantilized by the many laws restricting young people: curfew laws, tougher driving laws, teen-wage laws, laws curtailing sexual activities, free-speech restrictions at school, censorship of educational activities, dress codes, smoking and drinking laws, ad infinitum.

But government and unions are not the only teen enemies. The author makes the case (sometimes effectively, sometimes not) that everyone works against teens being adults. The media portray teens as self-absorbed; business makes big bucks promoting teen culture; and even parents underestimate their teens' abilities.

Epstein's book is chock-full of examples of young people in history who have made tremendous contributions. Louis Braille, if he were a blind kid today, would be cooped up in special-needs classes. Fortunately, he lived in the early 1800s and had perfected the Braille system by the time he was 15 years old. Samuel Colt invented the multiround, revolving-head pistol when he was 16. Edgar Allen Poe had his first book published at 18, including poems he had written at age 12 and 13.

The fact is, creativity is at its peak in early childhood and the teen years. But as we enter adulthood, we learn to conform, which takes a toll on creativity. Public schooling was created to mold young people into compliant citizens, sapping their creativity. Teen ingenuity remains high, but given the need to rebel, lack of adult companionship, and laws prohibiting the signing of contracts, their creativity is rarely channeled into positive pursuits.

In a test for "adultness" cocreated by the author, the difference between how adults and how teens scored was statistically insignificant: "Age is simply not a reliable measure of adultness," Epstein writes, "at least not once people are past puberty."

So what should we do about all of this? Obviously abolishing the myriad of laws restricting teens would be a good first start. But, unfortunately, Epstein believes young (and old) people should be given rights only if they can pass competency tests. And one gets the feeling that government would be doing the administering of these tests — as if government bureaucrats should be trusted with the job.

As well done and interesting as Epstein's book is, he doesn't go far enough. As Murray Rothbard wrote in The Ethics of Liberty, a child has rights "when he leaves or 'runs away' from home." Forget the tests; just set kids free.

This review originally appeared on LewRockwell.com.