GET NEWS AND ARTICLES IN YOUR INBOXPrint
A
A
Home | Mises Library | Bomb Iraq? 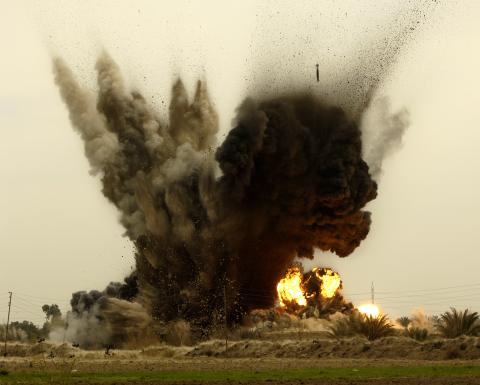 More starvation and disease or bombers and cruise missiles--these are the only actual choices Washington offers Iraq. No wonder Saddam will risk being bombed to end the economic blockade.

United Nations' authorities have officially recognized Iraq's compliance with Resolution 687, the basic cease fire resolution, for the destruction of all its weapons of mass destruction, but Washington now says the blockade must continue until Iraq complies with new demands such as finding missing Kuwaitis and such.

Also Washington demands "proving a negative," that Iraq has nothing hidden and will not in the future rebuild its weapons of mass destruction. At other times it says the blockade must remain until the starvation ridden Iraqis succeed in overthrowing their dictator.

Yet Iraq has only refused the continuation of inspections until the lifting of the blockade, one of the most severe in modern history, according to Secretary of State Madeleine Albright. The blockade prohibits almost all imports except food and medicine and then leaves Iraq with barely half the proceeds of its limited oil export revenue, and the money is allocated by a United Nations' bureaucracy (slowly while the people starve).

Washington uses its veto in the United Nations to thwart the will of almost the whole world and is only supported by Kuwait and Israel.

Washington keeps moving the goal posts demanding an interminable blockade for the nation where already in the last 8 years 1,200,000 have died from starvation and disease. This after the American bombing of the sanitation, electric, and economic infrastructure of the nation in 1990. Even now Washington prevents Iraq from obtaining repair parts for its oil production so it can sell some oil for food imports and to repair its irrigation and sanitation systems.

United Nations' Relief Coordinator Dennis Halliday from England has now resigned saying he can't any longer be part of the cause of the misery upon so many innocent people. He said it was correct to draw attention to the 4000 to 5,000 children dying unnecessarily every month due to the impact of sanctions.

He said the crippling trade embargo was incompatible with the UN charter as well as UN conventions on human rights and the rights of the child (BBC News Online 9/30).

Speaking at the United Nations Msgr. James Reinert of the Vatican delegation condemned the blockade saying that Pope John Paul had made "innumerable appeals" on behalf of the people of Iraq.

Bombing will generate more hatred for America in the Moslem world and badly weaken our moral authority in the world as we are seen mainly as hypocrites. Also it will cause other nations' terrorists to claim justification for killing American civilians anywhere and cause them to try to develop biological and chemical weapons as the only way to be able to fight back against us, possibly by bringing the battle to the American homeland.

One of the first casualties will be our own freedoms, as the government chases threats of terrorism here. Already the FBI was just legislated "emergency" warrantless wiretap authority to cover whole regions. Two years ago the Clinton Crime Bill (supported by the Republican leadership) proposed gutting the 4th Amendment which prohibits warrantless searches of private homes.

Iraq never harmed America and is no threat to America. As far as the defense of Israel, that nation has atom bombs and the most modern weapons in the Middle East. It has often proven that it can well defend itself.

Yet it is above all a moral question for Americans. Never before have we put such a blockade to leave millions of innocent people in starvation and misery for years on end. Publicly Washington calls on the Iraqi people to overthrow their dictator, Saddam Hussein, as the price of relieving sanctions. But they obviously can't.

Yet America's Secretary of State explained that "yes, we think the price is worth it" when asked on CBS 60 Minutes program (5/11/96) if maintaining the blockade was worth the death of half a million children.

It is high time to question the cost of what we are doing to the Iraqi people.