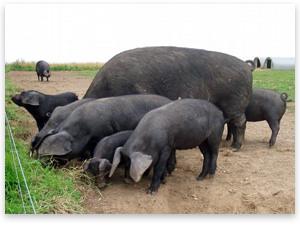 The neighborhood in West Texas had destroyed grass caused by the remarkable proliferation of this monstrous black pig. No one knows for sure where they came from. Some say they walked from Mexico. Some say they are indigenous but just recently out of control. No one doubts that they are a serious problem.

One pig is the size of a large desk. They travel in huge packs. They not only destroy lawns in minutes; they are also carnivores, so they trap goats, cats, dogs, and chickens in a corner and proceed to devour them alive. They are absolutely terrifying, worse even than the horned javelina pig that is native to this area of the state.

You can't kill them with small guns like .22 pistols or rifles. Those bullets just bounce off their inch-thick hides. You need a deer rifle with massive penetrating power. Once dead, they can be boiled and eaten, but most people would be disgusted at the very thought. Rarely has an intruder been so hated and feared. The preferred method is to trap them in large cages and then shoot them, carve them up with chain saws, and hurl the remains into trash dumpsters.

Free enterprise is assisting in this process. Pig-trap makers and distributors started two years ago as a cottage industry but they have grown to become a serious player in Texas commerce. Free enterprise is saving the day. One marvels at the process of how the market works here, as everywhere. There is a need and it is filled, long before the government is even aware of the problem. Where these makers and dealers come from is a mystery to me. But one thing all of human history teaches is that profit signals work; entrepreneurs won't be far behind.

On the other hand, my own neighborhood is also festooned with torn-up grass, and not because of pigs. A new Internet service provider is in town, a company that is stringing the entire city with fiber-optic cables in anticipation of a massive win against the existing competition. The company drives up its trucks, digs holes in people's yards, lays down cable in ways that are seemingly up to the company itself, even when it means traipsing on and destroying private property. The company never asked permission of homeowners.

Just as with the black pigs in Texas, the entire event has people out in the streets shaking their fists and denouncing the company for its uncompensated destructive actions. It's given free enterprise a bad name, as people blame the company directly and wonder how this kind of violation of property can even be legal.

It is darn legal, as it turns out. The company negotiated a deal with the city and absorbed unto itself a much-coveted "utility easement," which grants the legal right to the company to dig into private property up to a certain amount and under certain conditions. The city itself absorbs this right from its eminent-domain privileges, which is fancy way of saying that the state has first-ownership rights over all private property; what you own you own by grant of the state, and the state can take it anytime.

Legal or not, it is animal-like behavior. It's one thing when it is done by wild pigs. We can trap them and kill them in an effort to defend our rights against the brutality of nature. But when identical forms of destruction are sponsored by the state, we are talking about a form of brutality that is purely man-made.

Now, you might say that this power is necessary because, if the company tried to buy out the rights, there would be holdouts who would charge exorbitant fees. This scenario strikes me as the kind of scenario economists invent to show market failure. The real world has many solutions, including keeping privacy in contract making and offering special goodies to homeowners such as free services for a time, or perhaps different technologies that do not invade people's land. Where there is a will, there is a market way.

As it stands, the city has granted this Internet company a massive corporate subsidy that intuitively strikes most people as unfair and corrupt. It is an example of the mixture of private and public sectors, very much along the same lines at the bailouts of 2008 and following.

These kinds of issues go a long way toward explaining how it is that people turn against free enterprise, despite the reality that the market itself is the source of every material blessing that is ours. It accounts for how people come to see private enterprise as the source of corruption and a despoiler of society. For this reason, the greatest cost of public-private collusion is ideological.

The forces that save us from the destruction wrought by pigs can themselves, under the wrong legal conditions, behave very much like pigs — and when they do, they can't be surprised when the public wants to trap them, kill them, and eat them for dinner.