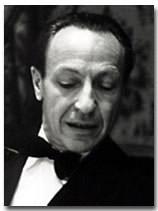 "A return to Austrian School tenets, both in capital theory and in monetary theory, and also in business-cycle theory, is absolutely needed."

The Stock Market, Credit and Capital Formation by Fritz Machlup (1931, 1940): translated from a revised version of the German edition by Vera C. Smith (a pdf file).  Read an interview with Machlup in the Austrian Economics Newsletter

Fritz Machlup (Dec. 15, 1902–Jan. 30, 1983), economist, was born in Wiener Neustadt, Austria, the son of Berthold Machlup owner of a cardboard-manufacturing business. He entered the University of Vienna in 1920 where he studied under Friedrich von Wieser and Ludwig von Mises (and became his professional advocate in later years). His dissertation on the gold-exchange standard was completed under von Mises in 1923 and published in 1925 as Die Goldkernwahrung. He married Marianne (Mitzi) Herzog in 1925 and they had a son and daughter.

Machlup became a partner in an Austrian cardboard-manufacturing firm in 1922 and helped form a paperboard corporation in Hungary in 1923. In 1927 he became a member of the Austrian cardboard cartel. Machlup also served as the treasurer and later secretary of the Austrian Economic Society and participated in the famous seminar of von Mises and the interdisciplinary seminar, the Geistkreis.

As an academic in Austria, Machlup published a book in 1927 on the adoption of the gold-exchange standard in Europe, two important articles on the effects of German war reparations payments, and an important book on the stock market and captial formation in 1931. As Austria and the World slipped deeper into depression, Machlup wrote 150 newspaper articles advocating liberal economic policy.

In 1933, Machlup accepted a Rockefeller fellowship that took him to Columbia, Harvard, Chicago, and Stanford Universities and put him into contact with most of the leading members of the American economics profession. He held a professorship at the University of Buffalo from 1935–1947 and served in visiting positions at Cornell University (1937–8), Northwestern University (1939), University of California at Berkeley (1939), University of Michigan (1941), and two stints each at Harvard (1936 & 1938–39), and Stanford (1940 & 1947). In the war effort, Machlup served as a special consultant to the Post War Labor Problems Division of the US Department of Labor (1942–43) and in the Office of Alien Property while a visiting professor at American University (1943–46). During this period he wrote extensively including seminal papers on the supply and demand of foreign exchange and an influencial book that exposed the limitations of the Keynesian multiplier approach to foreign exchange and national income. In 1946, Machlup defended economic theory in research on industrial organization and exposed the problems of using questionnaires in empirical research.

In 1947, Machlup became professor of political economy at Johns Hopkins University. His 1949 book on the basing-point system that was published in the wake of the Surpreme Court's decision against basing point pricing was a tour-de-force and is given some credit for President Truman's subsequent veto of further attempts to legalize the practice. His work in industrial organization continued with two books in 1952 where he established the primacy of theory and demonstrated that that the purely factual approach in economics contained undisclosed theory. He served as visiting professor at Columbia University (1948), University of California at Los Angeles (1949), Kyoto and Doshisha Universities of Japan (1955), and as Ford Foundation Research fellow (1957–58).

Fritz Machlup began the investigation of innovation and knowledge in 1950 leading to the publication of The Economic Review of the Patent System (1958), important articles in 1958 and 1960, The Production and Distribution of Knowledge in the United States (1962), and Education and Economic Growth (1970). He published the three volume Information through the Printed Word: The Dissemination of Scholarly, Scientific, and Intellectual Knowledge (1978) and the first three volumes of the projected ten volume series Knowledge: Its Creation, Distribution, and Economic Significance (1980, 1982, 1983).

Machlup was the Walker professor of internation finance and director of the International Finance Section at Princeton University from 1960 to 1971. He was visiting professor at City University of New York (1963–64), New York University (1969–71), Osaka University (1970), University of Melbourne (1970), and was consultant to the US Treasury (1965–77). He had worked on international monetary economics throughout the 1950s and provided a comprehensive asssessment of the looming international monetary problems in the early 1960s. In 1963, he formed an organization of academics, known as the Bellagio Group, to study this problem, develop an academic consensus, and offer practical solutions. His success in this venture attracted the attention of governments and central bankers and resulted in the publication of numerous books and articles on the international currency crisis and its solution. Robert Triffin dubbed him "the unquestioned intellectual leader and mentor of our vain efforts to reform the crumbling international monetary system." Ironically, his dismissal of the traditional gold standard as a possible solution on grounds of political practicality, led to a temporary split with his mentor, Ludwig von Mises. Later, when Mises was seeking a publisher for his 1949 work Human Action, Machlup intervened on his behalf with Yale University Press. Machlup's influence was decisive in bringing this great book, the culmination of the Austrian School, to light.

In 1971, Machlup began commuting to New York University. He published Optimum Social Welfare and Productivity with Jan Tinbergen, Abram Bergson, and Oskar Morgenstern in 1972. While continuing his massive projects on the international monetary system and the economics of knowledge, he published A History of Thought on Economic Integration (1977) and Methodology of Economics and Other Social Sciences (1978). He died in Princeton, New Jersey shortly after finishing the third volume of Knowledge.

Fritz Machlup's papers are in the Hoover Institution on War, Revolution and Peace Archives at Stanford University. No biography is available, but much biographical information is contained in Breadth and Depth in Economics: Fritz Machlup—The Man and His Ideas, edited by Jacob S. Dreyer (1978). A bibliography of his work is contained in the Economic Writings of Fritz Machlup edited by George Bitros (1976). His early work on the language of economics is collected in Essays in Economic Semantics (1963, 1967, 1975). His most important papers include "The Commonsense of the Elasticity of Substitution," Review of Economic Studies 2 (1935); "The Theory of Foreign Exchanges," Economica N.S. 6 (1939) & N.S. 7 (1940); "Elasticity Pessimism in International Trade," Economia Internazionale 3 (1950); "Concepts of Competition and Monopoly," American Economic Review 45 (1955); "The Problem of Verification in Economics," Southern Economic Journal 22 (1955); "Relative Prices and Aggregate Spending in the Analysis of Devaluation," American Economic Review 45 (1955); "Theories of the Firm: Marginalist, Mangerial, Behavioral," American Economic Review 57 (1967).