GET NEWS AND ARTICLES IN YOUR INBOXPrint
A
A
Home | Mises Library | Bigness Is Badness: The Case for a National Divorce

Bigness Is Badness: The Case for a National Divorce 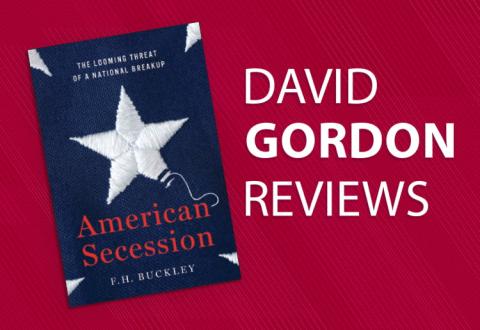 F.H. Buckley, a Canadian lawyer, political philosopher, and economist who now teaches at the Scalia School of Law at George Mason University, has written a book that challenges conventional wisdom and is all the better for that. America, he tells us, is so bitterly divided that we should consider breaking it up into several separate countries. To do so would not be without risk, but it has many advantages. People tend to be happier in smaller countries, and as Buckley makes clear, this is no accident.

One might object that political discord is hardly new in American history, but, aside from the Civil War, this has not resulted in a breakup of our nation. Why should things be different now? Buckley answers that

we’re less united today than we’ve been at any time since the Civil War, divided by politics, religion and culture. In all the ways that matter, save for the naked force of the law, we are already divided into two nations just as much as in 1861. The contempt for opponents, the Twitter mobs, online shaming and no-platforming, the growing tolerance of violence—it all suggests we’d be happier in separate countries.

The split in America includes but is not confined to the division between North and South, and some Southerners, including the philosopher Don Livingston, call for secession as a way to preserve the distinctive values of the South. That is a belief long prevalent there, and Buckley cites the nineteenth-century South Carolina lawyer James Pettigru, who thought that his state was “too small for a republic but too large for an insane asylum.”

Even if secession has much to be said for it, isn’t it unconstitutional? Buckley maintains that it is far from clear that it is. An influential argument against secession is found in Texas v. White (1869). Chief Justice Salmon Chase said that the Constitution has as its purpose to form a “more perfect” union than the one already existing under the Articles of Confederation, which was already “perpetual.” For that reason, the Constitution is also perpetual and indissoluble.

Buckley shows that this was by no means the stance taken by the delegates to the Constitutional Convention. They readily contemplated the breakup of the United States into separate republics:

The delegates thought of the government under the Articles of Confederation, and then under the Constitution they were drafting, as a compact among thirteen states, and they believed that when one state thought its rights had been traduced by the federal government, it could withdraw from the compact, even as one party can rescind a contract when the other party has breached it. That’s what Madison argued. . . .Virginia’s ratification of the Constitution was expressly conditioned on a right of secession. How then could it be deemed unconstitutional?

Not everything that is constitutional is desirable. Should we regard secession as a regrettable necessity, or is it rather a positive good? Buckley shows that there is much to be said for the latter view. “When we look at the evidence from SWB [subjective well-being studies] we find that [Roger] Sherman was right, along with Montesquieu and Rousseau, while Hume and Madison were wrong. People in small countries are happier. Bigness is badness.” By the way, Buckley holds that Roger Sherman was more influential than Madison at the Constitutional Convention. Madison’s nationalist proposals were rejected.

Why are people happier is small states? For one thing,

big states are more corrupt. As Montesquieu and Rousseau argued, there’s a greater sense of solidarity in smaller states, such as Finland, where people are less diverse and more trusting of each other. . . .Montesquieu was also right in thinking that small countries won’t have so many wasteful interest groups as larger ones. In sum, governments will be more attuned to the interests of their citizens in smaller states.

The case is not all on one side. Sometimes local governments are corrupt, and the federal government brings them to justice.

Again we’re looking at tradeoffs. If a state seceded from the United States, its citizens would lose the benefit of the federal government’s oversight of local criminal corruption. On the other hand, being smaller, the seceding state would be less affected by noncriminal corruption. . . .There would be fewer dollars in play, and a smaller set of interest groups and dollars diverting public dollars to their private ends through legal means. And it’s the noncriminal corruption that’s ordinarily more troubling.

To my mind, Buckley’s best argument that small governments are better than large ones has to do with the military. Large states like to “throw their weight around,” and the United Sates, the largest military empire in world history, is a prime offender.

The costs of a large military, in money and in lives, might be acceptable if you like a strong military for its own sake, and regional or world dominance. So then you might favor a large country with a huge population. But if you’re not sure that military glory is worth the cost, you might prefer a small state, with a modest military budget. And that might be an argument for secession. Imagine what the last fifty years of history would have looked like if America had been split into two or three different countries. There would likely have been no Vietnam War and almost certainly no second Iraq war.

Buckley also argues that small states are more likely to be free than large ones, though this is not always the case.

If bigness invites rule by a dictator, dictators also like bigness. With greater size comes grander palaces and more power to push neighbors around. . . .[S]ecession would serve to bring the government closer to the people, and in so doing it would make people freer.

Small states also tend to be wealthier than large states, though again the evidence is not all on one side.

The evidence. . .suggests that bigness is not an economic advantage for a country. . . .The advantages of bigness, in terms of things like internal free trade, don’t appear to outweigh the disadvantages. . . .Like a huge conglomerate whose managers are incompetent to oversee its varied divisions, an overlarge country wastes resources because its officials can’t govern efficiently.

To some extent, in my view unfortunately, Buckley retreats in the last part of the book from full support for secession. He calls for “secession lite,” that is to say, devolution of power to the states and localities, while retaining in place the federal government. I wish he had moved in the other direction and explored the ways people can solve their problems without resort to the state. If “Tiebout competition” between states is good, why is not competition between private individuals and firms even better?

Buckley would I am sure have a forceful answer to this challenge. All friends of freedom can learn a great deal from this outstanding book.