GET NEWS AND ARTICLES IN YOUR INBOXPrint
A
A
Home | Mises Library | Bernie vs. Ron Paul: There’s No Comparison 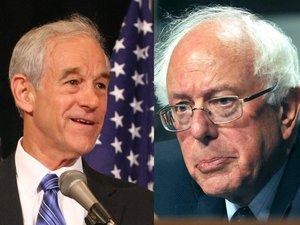 Super Tuesday may have been the beginning of the end for the Bernie Sanders campaign, but the ideas that propelled it are likely to linger for quite some time. With some writers comparing Bernie to Ron Paul (not in terms of economics and philosophy, of course, but as insurgent candidates), now seemed like an opportune moment to examine the Sanders message and legacy, and compare it to Ron’s.

Like Ron, Bernie surprised all the pundits with his fundraising, polling, and electoral success. In fact, so successful has Sanders been that Hillary Clinton has been reduced to a pathetic and unconvincing “me, too” campaign — I can be just like Bernie, if that’s what you rubes want!

Bernie has gained a lot of traction from his complaints that Hillary is in the tank for Wall Street and the big banks. He’s likewise pointed to the six-figure honoraria Hillary has earned from speeches given to the big banks.

The best the now-hapless Bill Clinton could do in reply was to note that Bernie, too, had been paid to give speeches. Technically, Bill was right. Bernie had earned money from public speaking: a whopping $1,800 over the course of a year. The year before that, Bernie had earned $1,300 from public speaking. All of this money was donated to charity, as is the requirement for US senators.

It’s true that Bernie is better than Hillary on foreign policy, but in keeping with Rothbard’s Law — everyone concentrates in the area in which he is worst — Bernie speaks very little about issues of war and peace. And even there, consistency and principle are elusive: he supported Bill Clinton’s bombing of Serbia over Kosovo, an act of terror based on propaganda that rivaled anything George W. Bush ever peddled. Sanders favors the ongoing drone campaigns, too, and even supported the F-35, one of the biggest boondoggles in the Pentagon’s long and sorry history.

Bernie’s primary legacy will be to have resuscitated the idea of socialism in the minds of many Americans. It is a very confused socialism, to be sure. The young people who follow Bernie can’t even seem to define socialism, according to recent surveys. And in fact Bernie’s economics is really just a hyper-Keynesianism rather than out-and-out socialism. But by suggesting that the Scandinavian countries constitute a model that the United States should emulate, he has encouraged the idea that only large-scale, systemic change in the direction of vastly increased government power can produce the kind of society Americans want.

Capitalism ought to be our default position, since it conforms to the basic moral insights we acquired in our youth: keep your word, live up to your agreements, don’t take what doesn’t belong to you, and do not cause anyone physical harm.

But thanks to years of propaganda to the contrary, socialism has come to appear to many people as not simply a morally plausible position but clearly and obviously desirable and superior to the capitalist alternative. The free market, they are convinced from what they recall from their elementary school textbooks, leads to “monopoly” and oppression.

Bernie speaks as if the system is rigged against the people because of business influence in government — a fair enough point, as far as it goes — but it’s hard to take this criticism seriously when his proposed solution is to extend the influence of politics over more and more areas of life and increase the powers and scope of the very government he is supposed to be criticizing.

The Sanders narrative is rooted in two major historical claims, both of them dead wrong.

First, Sanders believes “capitalism” was to blame for the 2008 crash. But as mises.org readers know, that downturn, like the Great Depression before it, was preceded by years of Federal Reserve credit expansion. According to the Austrian theory of the business cycle, the artificial lowering of interest rates below free-market levels sets in motion an unsustainable economic boom. The economy is set on a path that could be sustained only if real resource availability were greater than it really is. Eventually, when real savings and resources turn out not to exist in the abundance that the Fed’s interventions misled people into expecting, projects have to be abandoned and the phony prosperity becomes real recession.

Sanders supporters will no doubt point to the great number of bad mortgages originated by private lenders. But would these mortgage loans have been extended in the first place if institutions like Countrywide couldn’t sell them to the government-privileged Fannie Mae and Freddie Mac? Fannie and Freddie enjoyed special tax and regulatory advantages and had a special line of credit from the US Treasury — a line of credit everyone knew would be essentially limitless if push ever came to shove.

It was the perfect storm: the Fed’s crazed monetary policy injected huge quantities of additional credit circulating throughout the economy, and the federal government’s various mandates and regulations made real estate an artificially attractive outlet for all that new money. When this ramshackle edifice came crashing down, capitalism — which, in the midst of all this money creation and regulatory lunacy, had never been tried — took the blame.

Indeed, what could be intellectually easier than blaming the “free market” for a phenomenon a critic doesn’t understand? Ron Paul, on the other hand, never tired in his own presidential campaigns of going beyond surface explanations to account for what really happened in the disaster of ’08, and identify who the real culprits were.

The other part of the Sanders story — Scandinavia — is shallow and misleading, too.

In fact, Denmark’s own prime minister, Lars Lokke Rasmussen, finally had to correct the Vermont senator’s references to his country as “socialist.” “I would like to make one thing clear,” Rasmussen said. “Denmark is far from a socialist planned economy. Denmark is a market economy.”

Still, there’s no question Denmark has a large public sector. And it’s starting to suck the life out of the place. Denmark’s various benefits subsidize idleness to an absurd and unmanageable degree. In the country’s 98 municipalities, guess how many have a majority of residents working. If you answered three, you know far more about Denmark than Bernie and his supporters do.

It’s a similar story in the rest of Scandinavia. For instance, Sweden’s welfare state was able to develop only because of the wealth created by decades and decades of a prosperous market economy. Private-sector job creation was anemic to nonexistent in the decades following the radical expansion of the Swedish welfare state. And as for Norway, there are lots of “free” things there, it’s true — if you’re prepared to pay a 75 percent effective tax rate.

The comparison of Bernie to Ron goes like this: both launched insurgent, anti-establishment presidential campaigns while in their 70s, shook up their respective party establishments, and attracted large youth followings. But Bernie is no Ron.

Just on the surface: Bernie is a grump and difficult to work with; Ron is a kindhearted gentleman who always showed his appreciation for the people in his office.

More importantly, Ron urged his followers to read and learn. Countless high school and college students began reading dense and difficult treatises in economics and political philosophy because Ron encouraged them to. Bernie’s followers receive no such encouragement. And why should they? Bernie’s platform merely regurgitates the fallacies and prejudices his young followers already imbibed in school. What more is there to read?

Ron’s followers, meanwhile, were curious enough to dig beneath the surface. Is the state really a benign institution that can costlessly provide us whatever we might demand? Or might there be moral, economic, and political factors standing in the way of these utopian dreams?

Bernie’s supporters demand material things for themselves, to be handed to them at the expense of strangers they have been taught to despise. But like Ron himself — who as an OB/GYN opposed restrictions on midwives even though doing so was not in his material interest — the young Paulians embraced the message of liberty without a thought for material advantage.

It’s not hard to cultivate a raving band of people demanding other people’s things. Such appeals arouse the basest aspects of our nature, and will always attract a crowd. It’s very hard, on the other hand, to build up an army of young people intellectually curious enough to read serious books and consider ideas that go beyond the conventional wisdom they learned in school about government and market. It’s hard to build up a movement of people whose moral sense is developed enough to recognize that barking demands and enforcing them with the state’s gun is the behavior of a thug, not a civilized person. And it’s hard to persuade people of the counter-intuitive idea that society runs better and individuals are more prosperous when no one is “in charge” at all.

Yet Ron accomplished all these things. And that is why, when we position the Vermont senator against the Texas congressman, Ron’s achievement is so much greater and more historic.