Bailing Out the Red Light District 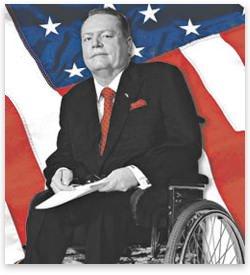 With the federal government ladling out billions in bailout money to the financial and auto industries, a number of businesses now have their hands out. Home builders, retailers and commercial real-estate developers all want a piece of the bailout pie. Not like there is an existing warm pie cooling on the window sill waiting to be cut and served. No, this money pie is created out of nowhere, to be paid for in higher prices as the inflation is forced upon the unwitting public.

Nobody could imagine that pornographers would be brazen enough to line up at the government trough. But sure enough, Hustler magazine publisher Larry Flynt and Joe Francis of Girls Gone Wild fame have asked their local Congressman, Henry Waxman, for $5 billion because, "People are too depressed to be sexually active," according to Flynt. Ever the patriot, Flynt says an unsexed nation is an "unhealthy" nation. "Americans can do without cars and such but they cannot do without sex."

As Boldrin and Levine describe, "The thousands of Internet sites distributing pornographic materials around the globe are, most of the time, imitators of the main initial producers, most often in violation of copyrights and licensing restrictions."

So the jobs that Joe Francis assured Fox Business that he and Flynt would create are likely to be jobs for intellectual-property lawyers, in hopes of benefiting Hustler and Francis's Mantra Films, Inc. at the expense of their innovative and creative competitors.

Throwing money at Flynt and Francis — like bailing out the automakers and the big banks — stifles innovation and new technologies in order to keep outmoded business models in place at the expense of taxpayers.

This article originally appeared on LewRockwell.com.