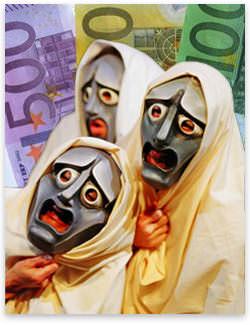 This summer Roger Bootle won Lord Wolfson's £250,000 prize for the best advice for a country leaving the European Monetary Union (one may assume that this advice is aimed at Greece). A more statist, anti-liberal policy than his could hardly be envisioned, which is a sad commentary on the mindset of the judges chosen by Lord Wolfson. His advice contrasted sharply with that of Dr. Philipp Bagus, whose liberal, transparent, and free-market-oriented policy advice was rejected in favor of Mr. Bootle's call for state secrecy and coercion.

Mr. Bootle's statist advice stems from his misunderstanding of basic economics in which he views symptoms as causes. He offers no explanation for Greece's unsustainable debt burden, high cost structure, and high unemployment other than the standard Keynesian explanation of inadequate aggregate demand. Once this fallacious view is swallowed, the prescription follows axiomatically, i.e., devalue the currency to restore competitiveness vis-à-vis foreign markets, which will increase aggregate demand and reduce unemployment. Oh, and the Greeks may have to default on their foreign debt, but history shows that this is not a problem. Really?

Despite his lengthy and repetitive prize submission, Mr. Bootle's recommendations can be summarized in this one sentence: In complete secrecy and with no prior discussion, redenominate all Greek euro-denominated bank accounts into drachma-denominated accounts and devalue the drachma.

That's it! There is no need to cut public spending. Quite the contrary, because public spending adds to the Keynesian concept of aggregate demand, and aggregate demand cannot be allowed to fall. The secrecy part is essential for Mr. Bootle's plan. If the Greek people got wind of what was to happen, they would take measures to protect their property, such as transferring their euro-denominated bank balances to banks in Germany. Mr. Bootle refers to such a development as a crisis, but a crisis for whom? Taking measures to protect one's property would not be a crisis for the common Greek citizen. It would be exercising rational self-interest. Mr. Bootle's so-called plan is nothing more than robbing Greek citizens in the middle of the night!

Give the Greeks a Better Currency

The aim of currency reform — and do not mistake my intention; currency reform is needed — should be to replace a poor currency with a better one. But Mr. Bootle (and his Keynesian colleagues) see the world upside down. In their world of aggregate demand, a weaker currency always is preferable to a stronger one, because a weak currency purportedly makes a nation more competitive in international markets. But this is pure propaganda. A weak currency not only makes necessary imports more expensive, reducing prosperity, but it also is an outright subsidy to foreign buyers of a nation's goods. As I have argued in "Value in Devaluation?" and as James Miller has argued in "Mark Carney's Zero-Sum Game," currency devaluation is merely a transfer of wealth from all of a nation's citizens to politically favored industries, usually export industries. It is no different from giving a subsidy to any domestic producer. The subsidy is paid by all the citizens of the subsidizing country, not by the foreigners who buy the subsidized good. They get a bargain.

Furthermore, devaluation does not make a nation more competitive. It does nothing to spur increased domestic saving or external capital investment, which lead to the increased application of capital per capita, the only sources of increased worker productivity and the only sources of increased real wages. Devaluation does not reveal the onerous, wealth-destroying effect of economic regulation, not does it reveal the true costs of the welfare state, which relies on high taxes to fund present consumption at the expense of future prosperity. What the state spends cannot be saved and invested, no matter how cheap the currency.

And, contrary to Mr. Bootle's statement that "improving competitiveness is at odds with the objective of reducing the debt burden," Greece will not be able to reduce its debt until it does become more competitive. It may well be impossible for Greece to pay all of its debts, but this merely reveals the dire reality of current policy; it does nothing to change that reality. The increase in the debt burden must stop! It must stop now!

Mr. Bootle misses the cause of the euro debt crisis completely when he fails to see that ECB euro-denominated loans to captive national banks, with worthless sovereign debt as collateral, is the manner in which the European Monetary Union subsidizes failed economic policies. As long as the Greek government can get unlimited euro loans from the ECB, there is no real reason to reform the nation's economy and there will be no end to the debt crisis.

So, Mr. Bootle proposes an even worse currency, a devalued drachma, as the replacement for a bad one, the euro. And if the Greek people resist outright theft through devaluation, then the government must trap their wealth internally, where it can be plundered later, by using capital controls to stop euro transfers to safer, foreign banks. The fact that the free movement of capital was one of the pillars of the European project apparently must be sacrificed for the benefit of the state. In fact Mr. Bootle admits that capital controls are illegal under current EU law, but he recommends them anyway. All tyrants love a crisis, because it can be used as an excuse to break the law.

Dr. Philipp Bagus of King Juan Carlos University, Madrid, offered the truly liberal alternative. He proposed a long period of public discussion about alternatives to leaving the euro, which would allow ample time for Greeks to move their property out of the greedy reach of their own government, should they decide to do so. The currency crisis might be solved in this manner as Greek banks closed and the Greek government shut down its welfare and regulatory system for lack of funds. The Greek government could repeal legal-tender laws, which currently require Greek citizens to transact business in one currency only — always that issued by the state itself. Concomitantly it could reinstate the drachma as a strong currency backed by gold. Then good money would drive out bad, as people freely chose which currency to use. They would choose the one that is most marketable. One element of that marketability would be that it would retain its purchasing power.

Of course, Mr. Bootle desires the opposite, i.e., an ever depreciating currency that robs currency holders of their purchasing power. Naturally Greeks will resist this; therefore, the Greek government must install capital controls. Yet the essence of self-government and democracy and the great triumph of postwar Europe was the freeing of the individual first from fascist tyranny and then communist tyranny, whose primary means of enforcement were control of the economy.

The future of Europe will emerge from the euro debt crisis. Mr. Bootle desires a return to state currency controls as a means to prop up the decaying welfare state. Dr. Bagus desires a step back from this unfortunate detour, which took concrete form with the formation of the euro. Rather than compound the errors of the euro with even more state intervention, the alternative is to anchor currencies in gold. This will force individual nations to engage in true democratic processes to determine the scope of state action. It will end the stealth transfer of wealth via euro monetary expansion. In that regard it will force each nation to live within its own means. What's wrong with that?