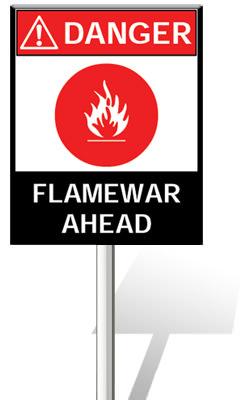 Tags Free MarketsMedia and CultureHistory of the Austrian School of Economics

Digital media — particularly "social" media like forums, wikis, blogs, and tweets — have forced all people, including intellectuals, to engage each other as never before in human history.

And yet, people have discovered that to know others is not necessarily to love them. Conflicts and confrontations are a regular feature of daily discussion, which is all fine; but sometimes these can become personal and hysterical, and lead to lifelong hatreds.

People who frequent forums and other such venues know all about this. It is often the "noobs" who are at the forefront of the flamewars, getting their feelings hurt and lashing out, creating a spiral to the bottom. More experienced users learn to distinguish substantive discussion and argument from personality clashes.

At the Mises.org forums, for example, the periodic flamewars involve claims that a post or comment is too brassy, or too studied, or too far afield. This may or may not be true, but from where do we draw these impressions? And what standard is available to decide what is and what isn't tolerated?

I've noticed three personality types based on three archetypes or muses in Austrian history and tradition: Ludwig von Mises, Friedrich A. Hayek, and Murray N. Rothbard. This thought occurs to me as I reflect on a type of complaint that comes to us often about Mises Dailies, as well as controversies that come up in blog comments and discussions, many of which concern the proper style and tone (and content) of a site such as this.

The points here are not completely invalid, though surely not every article has to say everything or be everything. There are times for power-elite analysis and times for advancing pure economic understanding. There are times to denounce war and times to reflect on methodology in the social sciences. The Austro-libertarian perspective is vast and varied, with implications for the whole world of ideas.

And it is true that articles here can be rather speculative (Block on private roads, Kinsella on intellectual property, French on the downside of bank deregulation), but there is nothing wrong with pushing a paradigm further down the road. Nor is there anything wrong with passion in defense of freedom.

Is there really a need to choose one approach to prevail? Why can't they all work together, provided people can be tolerant toward different temperaments?

These three types generally follow the styles and approaches of these great thinkers — however different they might be. Let's examine the prevailing models and see which one you might fall into.

He was a gentleman of the old school, born into prewar Europe, a brilliant student in every area, with courtly manners that he retained until his death. He faced immense trials in life (two wars, economic depression, two migrations, and relentless professional upheaval) and yet never lost his foundational commitment to reasoned, calm, and relentless argument as the right approach to changing society. Even when he was witness to amazing banking scams, he resisted naming names to focus only on the facts and logic.

His dedication to truth as he saw it was intransigent from the moment he read Menger's Principles until his death. His style was firm, dedicated, and forceful — but always of the old world. He also retained his commitment to 19th-century-style liberalism — despite the totalitarian trends of the 20th century and despite the growing radicalism of his own later students. His method was systematic argument in the form of large treatises in which logic was the engine, and his system of thought was revealed book by book over the course of his lifetime.

He believed that the ideas that people hold were ultimately more powerful than their personal interests. I think of him as the pure intellectual, full of discipline and rigor, but perhaps a bit impersonal. The old-world ways of burying the personality for the sake of science prevailed in his practice. And this was true to the point that when Jörg Guido Hülsmann was writing the biography, he became amazed at how little documentation he found on any personal issues. He lived the purest life of the mind, Guido suggests.

Hayek was a colleague of Mises's who adopted a different style and approach, first as a teacher faithful to the master in Austria and then later in London as the popularizer and systemizer of Mises's business-cycle theory in London. His battles with the Keynesians and the Fabians, however, imparted to him a strong sense of the importance of presentation in the war of ideas. He was temperamentally disposed to seeing his opponent's point of view; he crafted his message in a way that was not merely true but also, in his view, convincing.

He was not a system builder so much as a curious and brilliant scholar who took on topics one at a time throughout a long life, a man whose positions on issues evolved in unpredictable ways. He was a dedicated proponent of the gold standard who later (regrettably) suggested that some reinflation after a crisis might be necessary and (wisely) later came to the radical defense of an immediate end to all central banking.

He penned compromises with the welfare state in one book and later argued the "extreme" view that no forms of intervention can improve on the natural evolution of the social order. He spoke about the common law and the merit of evolved tradition, on the one hand, and in other writings took a strictly libertarian view about property and the state. Then just when you think that Hayek was a bit of a softy, you find an old interview with him on national television holding a hard line on the topics of inflation and unemployment.

Part of what makes Hayek interesting is precisely this sense of struggle that you get in his writings, the sense that he is not presenting a finished package but working through topics in light of his scholarly understanding — as led by evidence and reflection. In this way, he leaves some very interesting surprises. Of all the Austrians, he was strongest against "intellectual property" and, before Rothbard, he might have been the most sympathetic to the idea of a stateless society as a viable option. He never stopped learning and never stopped his intellectual struggle.

Rothbard was a system builder of a different sort, but more open, more enthusiastic and spirited, a researcher whose theoretical apparatus seems to have been largely in place from the time he put pen to paper and certainly by the time he finished his large treatise on economic theory. He took his economics from Mises and his libertarianism from Chodorov and the old American liberals, and knitted it all into a dazzling system of thought.

He had this remarkable capacity for teasing out the best from the thoughts of all ages, devouring books like snacks, and putting what he found into a model that applies in our times and all times.

The resulting outlook provided the perfect tableau for historical studies, and here, in my view, is where Rothbard's work really takes flight. There were no taboos, no unthinkable thoughts, no unspeakable phrases, no preconceptions, no sacred cows. He was a discoverer whose books take the reader through wild rides of villains and heroes, frauds and truth speakers, tragic victims and triumphant struggles. Even the longest-dead characters in history were still alive in Rothbard's mind.

As for his rhetorical style, it was pure fire. Progress meant breaking the model. He was committed to science but he was also ebullient in a way that is uncharacteristic of great scholars. Fun doesn't quite describe it. Just his presence in a room made the entire event entertaining for everyone. He was quick to laugh and he did so often and uproariously, and the juxtaposition between radical theory and outrageous fun was irresistible.

Fighting the enemies of liberty for him was a gallant and thrilling adventure, and fighting for liberty was pure joy. He had a way of regarding every moment of life as something of historic importance. He could turn a drab academic meeting into a memorable occasion, writing about it later the same way that others might write about wars and revolutions. This is far from Hayek, far from Mises, but completely captivating and thereby essential to the Rothbardian way.

So there we have it: the three tendencies of the Austro-libertarians I've seen online. We might sum up the dominant traits as reasoned, reflective, and radical. That's not to say that each of these three thinkers did not embody all of these traits. We are speaking here of large tendencies stretching over three long lives, about dominant characteristics that one might take from each thinker.

Nor is it the case that people working within this tradition must always fall into a single category. Some days, we feel as radical as Rothbard, others as reasoned and cool as Mises, and others as speculative and searching as Hayek. Sometimes it depends on whom we have most recently read. Great thinkers tend to have this effect on the world, transferring not only their ideas but also their temperaments to those who are influenced by them.

Yes, there are tensions from time to time, but Mises.org communities are proof that all three types can get along just fine, so long as no one is prepared to purge the other, or otherwise push one style, one approach, one method at the expense of the others. We can look at other figures in the history of the school, people like Hazlitt or Hutt, or at modern thinkers like Salerno or Hoppe, and see that they too embody a variety of these approaches.

It is a hopeless task to attempt to impersonate anyone, and Mises.org mavens cannot and should not do this for Mises or for Hayek or for Rothbard. We can only learn from them and be inspired by them. To draw insights from all sources is to create the kind of diversity that makes for a vibrant and productive intellectual paradigm and an endlessly fascinating website erected in the defense of liberty.