GET NEWS AND ARTICLES IN YOUR INBOXPrint
A
A
Home | Mises Library | The Austrian School and Spontaneous Order: Comment on O'Driscoll

The Austrian School and Spontaneous Order: Comment on O'Driscoll 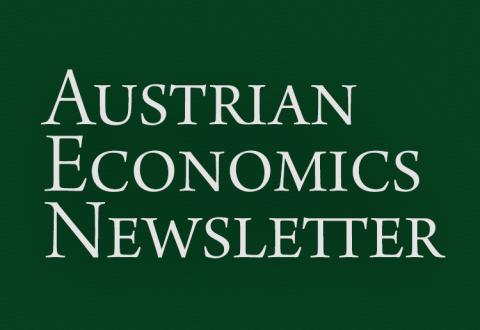 In the penultimate section of his paper on "Spontaneous Order and the Coordination of Economic Activities,"[1] Gerald O'Driscoll performs a valuable service in bringing into the open a controversy, sparked by Professor Lachmann's thought, which has arisen in Austrian circles over the question of general equilibration. It is evident (especially within these same circles) that further clarification of the issues involved is required before a satisfactory avenue for resolution of this dispute can be found.

The basic question which has been raised regarding general equilibration is: to what extent does there exist a tendency toward an overall equilibrium of an economy of interconnected markets? To formulate an acceptable, answer to this question we must clearly specify at least three items: (1) the meaning given to "tendency" in this context; (2) the temporal perspective (ex ante or ex post) from which market processes are viewed, and (3) the particular conception of general equilibrium employed. There has been misunderstanding among the disputants on all three items. I shall briefly?undoubtedly too briefly?deal with each of these items in turn.

(1) The notion of a "tendency toward an overall equilibrium" has been infelicitously interpreted (by me no less than by others) as a process of movement which would, under specified conditions, eventually allow an economy to reach general equilibrium. Hayek noted years ago that "tendency" in this context is better interpreted as the likelihood that the configuration of an economy (particularly its array of prices) will be near to a general equilibrium configuration.[2] Under this interpretation no contradiction exists between the denial that general equilibrium (or complex ex ante coordination of plans) could ever be brought about in a real-world competitive economy and the affirmation that such an economy harbors a strong tendency toward an overall equilibrium. "Equilibrating forces" which possess the capability of maintaining an economic system at a high level of coordination may yet inherently lack the capability of bringing about perfect coordination.

The problem of specifying market conditions and forces sufficient to usher in the reign of perfect and final equilibrium seems ultimately insoluable, for there is a simultaneity problem involved with having each market participant finally adjust his own activities to accord with the market signals to be generated by the activities of all others. The market signals by which he orients himself must already embody the decisions taken by all others before any one agent can act in a sufficiently informed manner. Perfect foresight would allow agents to overcome the simultaneity problem, but only because perfect foresight would place them already in Hayekian general equilibrium. It would not allow a process by which they might reach that state. Imperfection of foresight forms an impassable moat around the kingdom of perfect harmony. We may nonetheless attempt to specify the essential characteristics of an overall equilibrium, as Hayek had best begun to do,[3] and to use that kingdom as an analytical point of reference in assessing the likelihood (tendency) for an economic system to be in its general vicinity (i.e. for the variables of the system to be approximately at equilibrium values) under specified circumstances.

(2) Austrian economists are in general agreement with the proposition that market forces must be traced back to the plans of market participants, particularly the plans of entrepreneurs. Analytical differences arise over whether emphasis is to be placed on the expectations and decisions in which plans originate (an ex ante perspective) or on the experience the testing of plans provides (an ex post perspective). It seems to me that both perspectives are necessary for the analysis of dynamic economic processes, and that neither should be allowed to eclipse the other permanently.

Lachmann has taken primarily an ex ante perspective, stressing the role of expectations and the pervasiveness of uncertainty in future-oriented decision-making. Yet he has also noted that expectations are "largely the result of the experience of economic processes."[4]

In serial expectational processes learning is possible, provided the sequence of decision, action, result, and interpretation takes place with speed sufficient to outrun significant changes in the objective circumstances. Learning can play an important role in providing accurate foresight and coordination of the decision-maker's (amended) plan with the plans of other market participants. Only in autonomous or unique expectation, where the decision made is unprecedented and can or will never be repeated under similar circumstances (this is the case where the taking of the decision itself significantly and irretrievably alters the circumstances), can learning play no equilibrating role. Only with regard to unique expectation can the ex post perspective be neglected.

Kirzner's focus on the pure arbitrage aspect of successful entrepreneurship amounts to the adoption of an exclusively ex post perspective, as success can be ascertained only ex post. This perspective obscures the uncertainty (surrounding future prices) faced by producer-entrepreneurs.[5] To say that intertemporal opportunities for pure profit "tend to become discovered" by "alert" entrepreneurs[6] is to slur over the fact of uncertainty, suggesting by the choice of terminology that entrepreneurs can see clearly into some aspect of the future. It is to suggest that the adoption of entrepreneurial plans depends upon knowledge of their actual outcomes (knowledge which in fact can only be gained in the future) rather than on expectations about their outcomes. Profit is then seen as the reward not for superior foresight, as Mises viewed it,[7] but for the discovery of a piece of knowledge which others lack.

(3) Kirzner's readiness to accord opportunities for profit a seemingly objective status conforms with his use of an equilibrium concept embodying Pareto-optimality.[8] The Hayekian conception of dynamic equilibrium is more appropriately subjectivist in carrying no requirement that every would-be useful fact be known to each market participant and thus carrying no requirement that optimality from the viewpoint of an omniscient observer be achieved.[9] Lachmann has framed his discussion exclusively with reference to neo-Walrasian models of temporary general equilibrium. That he (rightly enough) finds the world of these models inconceivable says little by itself about the analytical fruitfulness of the Hayekian dynamic equilibrium or the Misesian evenly-rotating economy, and says even less about the possible tendency (properly understood) of a market economy to approximate the Hayekian sort of overall equilibrium.

One final comment: O'Driscoll expresses concern that Lachmannian skepticism toward general equilibrium involves a weakening of the case for the market system. With regard to a case based on Paretian welfare considerations this may well be true, but defenders of the market system should already be wary of arguments which claim too much. The "failure" of the market system to conform to a neo-Walrasian model which strips it of essential attributes may be regarded as reflecting poorly on the model rather than on the market system, and this is the attitude which I believe Lachmann to be taking. In a world of ignorance and uncertainty, the virtue of spontaneous order lies not only in promoting uniformity in the coordination of plans, as the neo-Walrasian complete-knowledge model of the state "perfect competition" would suggest, but also in encouraging diversity in the exploration of possible new opportunities.[10]

[4] Ludwig M. Lachmann, "The Role of Expectations in Economics as a Social Science" in Capital, Expectations, and the Market Process (Kansas City: Sheed, Andrews and McMeel, 1977), p. 66.

[7] Ludwig von Mises, Human Action, third revised edition (Chicago: Henry Regnery, 1966), p. 871. For an acknowledgment of the difference between his own emphasis and that of Mises, see Kirzner, Competition and Entrepreneurship, p. 86.

White is a professor of economics at George Mason University in Fairfax, Virginia.

White is a professor of economics at George Mason University in Fairfax, Virginia.

Methodology of Human Action, The