GET NEWS AND ARTICLES IN YOUR INBOXPrint
A
A
Home | Mises Library | Austrian Recipe vs. Keynesian Fantasy 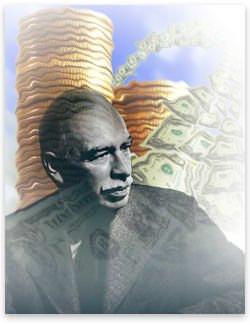 The current crisis has revealed the Keynesian roots of mainstream economics. The only debate has been the type and size of bailouts and stimulus packages. For example, Nobel laureate Joseph Stiglitz of Columbia University thinks nationalization is preferable to the Geithner-Summers toxic-asset-relief plan. The Keynesian fantasy is really a monomania because ultimately it is a fixation on a single panacea — more government spending. Meanwhile, the Austrians have the opposite set of policy guidelines and have heroically held to their recipe of liquidation.

The high degree of unanimity among mainstream economists in support of the bailouts and stimulus packages came into sharp relief at the recent convention of the American Economic Association. In addition to this unanimity, mainstream economists have become more influential and powerful than ever before. For example, Paul Krugman, the most recent Nobel laureate in economics and columnist for the New York Times, supports the stimulus packages to combat the recession. No matter how many new plans are offered, his only complaint is that it is not enough. Krugman's former colleague at Princeton University, Ben Bernanke, who is now in charge of the Federal Reserve, believes that if he can fix the problems in the "financial economy" he can prevent problems spreading to the "real economy." Larry Summers, former economist and president of Harvard University is now President Obama's director of the National Economic Council and presumably the coordinator of plans to address the economic crisis. It is interesting to note that Summers is the son of two academic economists and is the nephew of Nobel laureates, Paul Samuelson and Kenneth Arrow. He is also considered a mentor of Secretary of the Treasury Timothy Geithner, who worked under Summers in the Treasury department during the Clinton administration.

All this suggests to me that this crisis is a "market test" for mainstream economics. Never before have so many academic economists held such primary roles in the economic policy of the federal government. If we include the two outsiders, Stiglitz and Krugman, with the two powerful insiders, Bernanke and Summers, we get a good sample of the elite mainstream economics. Given that Congress has voted on very few of the many measures to address the economic crisis, this economic team, including Secretary Geithner, is presumably responsible for designing the bulk of the responses to the crisis.

Their responses amount to Keynesian economics on steroids. In the last quarter of 2007, there were the typical interest rate cuts by the Federal Reserve. Then, in January 2008, the first of the unprecedented moves came from Bernanke when the Fed began auctioning off reserves at the discount window. This was followed by one unprecedented response after another, bailouts, stimulus, and government guarantees, such as increasing FDIC insurance coverage on bank deposits and extending it to money-market mutual funds, but it all amounts to trillions of dollars of more government spending. Obama did not really bring "change"; he only increased the magnitude and speed of the policy responses.

The Austrian recipe for economic crisis is very simple and requires little action on the part of government. It only seems "hard" because of the presumption that the Keynesian approach could possibly be less painful. However, if you understand that the Austrian recipe is correct — that it would produce quicker and better results, and that the Keynesian approach is a recipe for disaster — then it is the obvious course to take.

Here are the passive ingredients of the Austrian recipe:

This recipe will produce the quickest possible recovery and minimize the magnitude of economic pain. The active side of the Austrian policy response would be to reduce the size of government, budget, taxes, and regulations.

It should be pretty obvious that the Austrians and mainstream/Keynesians have polar opposite views when it comes to solving the current economic crisis. To see how it might turn out, let us take a look back in American economic history.

The Next Super Cycle?

Mainstream economics identifies turns in the business cycle with the National Bureau of Economic Research's dating of American business cycles. In the table of cycle dating, the center column is the length of contractions in months. It appears to suggest that contractions are becoming shorter in duration while expansions have become longer in duration. However, there are many significant problems with NBER's cycle dating.

One problem to note is that the NBER dating obscures what I call "super cycles," which should not be confused with Kondratiev or Elliot Wave cycles. The first of these super cycles is the Progressive Era when a host of radical changes were made to the Constitution, government, and the economy. This super cycle encompasses the five cycles from 1907 to 1921. The second super cycle was the Great Depression from 1929 through World War II and the third super cycle was the Great Stagflation of the 1970s, which lasted from 1970 to 1982.

Another problem is how best to measure the economy over the business cycle. NBER looks at many factors in its dating of peaks, troughs, and recessions, but it largely boils down to GDP. One problem with this approach is that over time government spending has increased relative to the private sector, rising from just a few percent to a large minority of all spending in the economy. Federal government spending is less susceptible to cutbacks during recessions due to government's power to run budget deficits, tax, and inflate. The large amounts of government spending automatically makes more recent cycles seem less severe than older cycles when measured in terms of GDP.

However, government spending does not have its value tested with consumers in the market, and much of the spending is actually bad for the economy. Government could pay people to dig ditches and other people to fill the same ditches, and it would increase GDP, but no one argues this is the path to prosperity. Austrians would argue that such ditch digging and filling are actually better for the economy than what government actually does with our money.

Murray Rothbard addressed the problem of measuring a big government economy with the concept of private product remaining (with producers), or PPR, which basically takes GDP and subtracts from it twice the amount of government spending. Government spending is subtracted once to obtain gross private product and it is subtracted again to account for all the resources that government has siphoned off from the private sector. For example, applying PPR to the stagflation super cycle of the 1970s, we find that PPR (adjusted for inflation) increased from $600 billion in 1969 to merely $729 billion in 1982. That means there was anemic average economic growth of less than 1.4% per year during this period.

Rothbard then accounts for the increase in population by looking at the number of producer-breadwinners in the private sector (not government employees). Using calculations provided by Robert Batemarco, Real PPR per productive worker actually fell from $9,134 in 1969 to just $8,708 in 1982. What first appears to be four short contractions in the NBER dating system turned out to be an economic nightmare for the average American. On top of lower real incomes, when adjusted for inflation, the value of stocks fell by more than 50% during this period.

The three super cycles of the 20th century therefore coincided with the rise of the Progressives, the New Dealers, and the Keynesians.

In contrast, if we look at normal recessions, where the country is not at war, is on the gold standard, and where Keynesian policy is not dominant, we find a much different story. For example, the recessions of 1953–1954, 1957–1958, and 1960–1961 were short in duration, shallow in depth, and followed by robust growth. In terms of real GDP, economic growth briefly turned negative by one percent in the first and third recessions and by 2.5% in the second recession, which was the briefest of the three. If we look at the three recessions in terms of real PPR (per producer) we find that the first recession did not produce an annual decrease, but an increase of 2.7% in 1954, and more than a 5% increase in 1955. The second recession shows an annual drop of 2% in 1958 and a 6% increase in 1959. The final recession shows an annual drop of 2% in 1960, an increase of 2% in 1961, and an increase of 4.5% in the year following the recession.

The housing bubble peaked in July 2005. Private investment, a leading indicator of the economy, peaked at the end of 2006. As worsening conditions in the home building industry spread, the economy stumbled in late 2006 and again in late 2007 before falling into clear depression in 2008. The size and scope of the Keynesian policy remedies employed since late 2007 have been unprecedented. With the renaissance of Keynesian economics we can only conclude that the preconditions for a new super cycle have been established, and that if the policies are not reversed we face many years of depressed economic conditions.