GET NEWS AND ARTICLES IN YOUR INBOXPrint
A
A
Home | Mises Library | Austrian Economics vs. Bernanke's Economics 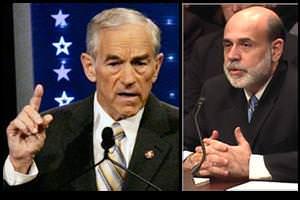 Economists of the Austrian School of economics define inflation differently than much of the mainstream of the economics profession. The typical mainstream intermediate macroeconomics textbook defines inflation as "[a]n increase in the overall level of prices" (Mankiw, Macroeconomics 5th Edition, 530). The eminent Austrian economist, Ludwig von Mises, suggested otherwise:

What people today call inflation is not inflation, i.e., the increase in the quantity of money and money substitutes, but the general rise in commodity prices and wage rates which is the inevitable consequence of inflation. (Mises, Planning for Freedom, 79)

A recent exchange between Congressman Ron Paul and Ben Bernanke took place during Bernanke's testimony before the Congressional Joint Economic Committee on November 8, 2007. Congressman Paul, instead of referring to either the PPI or CPI, referred to the MZM money aggregate:

Currently, of course, we can't follow the money supply with M3 but we can follow one of your statistics, which is the MZM — the ready cash available — and we see that inflation is alive and well. That money supply figure is going up about 20 percent per annualized.

The Achilles heel of all statist attempts at central economic planning is the problem of economic calculation. Ludwig von Mises, who first formulated the theory of economic calculation, reasoned that socialist planning was theoretically impossible because of its inability to rationally allocate resources due to the absence of information provided by prices determined in the marketplace. Mises's reasoning holds true for artificial manipulation of the "time market" (Rothbard, Man, Economy, and State, 375) for interest rates:

What economic calculation requires is a monetary system whose functioning is not sabotaged by government interference. (Mises, Economic Calculation in the Socialist Commonwealth, 225)

Artificially low interest rates result in an impairment of the economy's ability to perform economic calculation.

In 1974, the year following the death of Ludwig von Mises, Friedrich August von Hayek won the Nobel Prize in Economics for his "pioneering work in the theory of money and economic fluctuations and for their penetrating analysis of the interdependence of economic, social and institutional phenomena."

Hayek's Nobel Prize–winning theories drew directly from Mises's work on the business cycle. Hayek showed, in his book Prices and Production, how monetary distortions caused by inflation and credit expansion cause the capital structure of the economy to become maladjusted.

New money that enters the economy does not affect all economic actors equally nor does new money influence all economic actors at the same time. Newly created money must enter into the economy at a specific point. Generally this monetary injection comes via credit expansion through the banking sector. Those who receive this new money first benefit at the expense of those who receive the money only after it has snaked through the economy and prices have had a chance to adjust.

Perhaps the most current rendition of the ABCT is that of Professor Roger Garrison. In Garrison's model, as presented in his book Time and Money, the market for loanable funds is linked to a production possibilities curve that shows the economic tradeoff between capital investment and consumption. These two diagrams are then linked to a Hayekian Triangle illustrating the capital structure of the economy. Through his model, the manipulation of the money supply by a central bank can be analyzed. By lowering interest rates below a sustainable market level a diversion develops between the time preferences of investors and consumers. The result is malinvestment in capital goods by entrepreneurs. In due time, this "cluster of errors" by investors manifests itself in a recession.

Bernanke responded to Congressman Paul's remarks on inflation by saying that the Fed is acting under its Congressional mandate to promote full employment and maintain price stability. Bernanke's remark prompted Congressman Paul to open a second Austrian front in his war of economic theory with the Fed Chairman. Congressman Paul pointed out that the value of the dollar is falling not just domestically, but also abroad.

How can you do this and pursue this, the policy that you have, without further weakening the dollar? There's a dollar crisis out there and people's money is being stolen; people who have saved, they're being robbed.

I mean, if you have a devaluation of the dollar at 10 percent, people have been robbed at 10 percent. But how can you pursue this policy without addressing the subject that somebody's losing their wealth because of a weaker dollar?

Fed Chairman Bernanke, however, saw no such problem. According to Bernanke:

If somebody has their wealth in dollars and they're going to buy consumer goods in dollars and it's a typical American, then the decline in the dollar, the only effect it has on their buying powers, it makes imported goods more expensive.

While Bernanke's conclusion is correct in that the decline in the dollar will cause imported goods to become more expensive, only an acute case of myopia can prevent one from seeing that the rising price of imported goods is not the "only effect it has on their (the typical American's) buying powers."

Murray Rothbard was aware of the profound implications caused by the occurrence of falling exchange rates in the period following President Nixon's 1971 announcement that the United States was withdrawing from the International Gold Exchange Standard.

American tourists suffer abroad, and cheap exports are snapped up by foreign countries so rapidly as to raise prices of exports at home (e.g., the American wheat-and-meat price inflation). So that American exporters might indeed benefit, but only at the expense of the inflation-ridden American consumer. (Rothbard, What Has Government Done to Our Money?, 54)

A few short years after Nixon declared the United States Government bankrupt by refusing to repay debts in gold, the United States economy began to suffer its worst economic downturn since the Great Depression. An inflationary recession had arrived and this time the embattled American consumer could seek no solace in the "merciful veil of deflation" (Rothbard, America's Great Depression, xxxiii). The stagflation of the 1970s brought with it high unemployment and high inflation.

Another casualty caused by a falling exchange rate is the economy's structure of capital. Ludwig Lachmann emphasized that "capital resources are heterogeneous" (Lachmann, Capital and Its Structure, 2). Any particular capital good (higher order good, i.e., not a consumer good) can only be used for a limited number of purposes. Capital goods, in other words, are not perfect substitutes for one another. Only specific combinations of capital goods can complement each other such that a harmonious integration of the economy's capital structure results.

The limited range of uses of any particular capital good is what Lachmann referred to as "multiple specificity." When capital goods can no longer be profitably employed in their original optimal configuration, the owner of the capital must revise his plans. Capital goods will then be regrouped and employed at their best alternative uses on a scale of alternative possibilities. In this process, a loss of value will often result because the capital is now employed in ways other than those for which it was originally intended.

Changes in exchange rates brought about by the Federal Reserve's expansion of the money supply inevitably results in relative price changes of the factors of production. This is not the working of the free market allocating society's scarce resources to meet the most urgent needs. These relative price changes will invariably result in a shift of the rates of industry profitability in favor of certain industries and at the expense of other industries. Friction occurs within the economy while the structure of capital grudgingly restructures as it loses value accommodating the new economic landscape produced by governmental interference in the workings of the free market.

In conclusion, inflation wreaks havoc on the structure of capital. It does so not only through the intertemporal misallocation of resources that takes place when the interest rate no longer reflects the social rate of time preference, but inflation also wrecks the existing structure of capital by introducing unpredictability into entrepreneurs' plans that rest on predictable exchange rates.

Wealth is lost not only through a devaluation of currency, but also by way of the transition of capital from its intended uses, in the face of a now unprofitable business venture, towards its second best use. A central-bank-engineered monetary expansion producing falling exchange rates is a pecuniary externality resulting in a Lachmannesque kaleidoscopic vision of capital forever in disequilibrium.