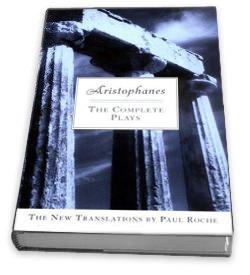 It used to be that every economist worth his salt knew Gresham's Law (or, if he was Polish, Copernicus's Law): "bad money drives out good." Narrowly understood, this rule says that when the government requires people to accept different forms of money at an exchange rate fixed by law, the form of money that is overvalued (the "bad money") will circulate, while the form of money that is undervalued (the "good money") won't.

Now comes a new translation of the plays of Aristophanes by Paul Roche, among them "The Frogs," which has the oldest known expression of this rule:

You know what I often think:
We treat our best men
The way we treat our mint
The silver and the golden
We were proud to invent
These unalloyed
Genuine coins, no less,
Ringing true and tested
Both abroad and [in] Greece
And now they're not employed
As if we were disgusted
And want to use instead
These shoddy coppers minted
Only yesterday
Or the day before
(as if that matters).
(Aristophanes: The Complete Plays, trans. Paul Roche, New American Library, 2005, p. 573)

In "The Frogs," two citizens of Athens descend into Hades for the purpose of resurrecting two well-respected politicians of the past to save the city-state from its current, corrupt rulers. The current rulers are said to be like the base-metal coins in circulation, while the rulers of the past are like the full-bodied, precious metal coins that formerly circulated.

The full-bodied coins "rang true"; that is, when flipped onto a solid wooden table, they gave out a distinctive ring. Think of Edgar Allen Poe's "The Bells." The heft, feel, and tone of the coins were sufficient, for most purposes, to distinguish a counterfeit from the genuine article. And these coins circulated abroad as well as at home because they had intrinsic value. In contrast, the debased coins were impossible to distinguish from any counterfeit, since they had no distinctive qualities, and were repugnant to foreigners and anyone else not compelled by law to accept them, just like current politicians.

The passage doesn't actually say how the base-metal coins came to replace the full-bodied coins. Nevertheless, we can infer that the audience knew what had happened, since the play was a comedy, not an economics lecture. From historical sources, we know that Athens had been involved in a series of wars against Sparta and other Greek city-states, and that it was threatened by Persia.

The continuing expenses of these wars depleted Athens's treasury. Even the gold and silver objects at the temple were melted and recast as money. Then the city resorted to debasement and to legal-tender laws compelling acceptance of the debased coins at the values of precious-metal coins. Soon, the coins were recast only with base metal.

The story of debased coins and their connection with fiscal imbalance and corruption is perennial. The prophet Isaiah (1:22) writes "Your silver has become dross, your wine diluted with water." Dross is base metal. The silver coins that had formerly circulated had come to be replaced by coins of base metal. The base metals might be polished so as to look like silver, as in the case of many contemporary US coins, but this only hides the corruption that would otherwise be manifest in the coins.

Similarly, the Islamic scholar Ibn Taymiyyah (who can be viewed as a forerunner of Wahhabism) wrote, at a time of continuing warfare against Christians to the west and Mongols to the east, "If the ruler cancels the use of a certain coin and mints another kind of money for the people, he will spoil the riches which they possess." Like Isaiah and Augustine, Ibn Taymiyyah wrote at a time of decline in his civilization and called for revival and separation from the world.

Speaking of the Mongols, it is to the Emperor Kublai Khan that we owe the invention of paper money. Marco Polo, who brought the news of this innovation to the Europeans, wrote in his travelogue, "nor does anyone, at the peril of his life, refuse to accept it in payment." During the later years of Kublai Khan's reign, the issues of paper currency became excessive, and an inflationary cycle got underway.

During the reign of his successor, the fourth Mongol emperor, the world's first "currency reform" was undertaken, with a forced conversion of the old currency for the new at the rate of five to one. The former prosperity was also replaced by corruption and decline.

Our own country's experience with legal-tender laws goes back to the colonial days, when the colonies issued paper money then known as "bills of credit." The first issue was by the Massachusetts Colony in 1690, during King William's War, when the English colonists of Massachusetts thought to outfit an expedition to take Quebec, then a French colony. The bills were inscribed, "This indented bill of Five Shillings … shall be in value equal to Money."

Soon after this war came Queen Anne's War and another issue of bills of credit. Then came another war whose name escapes me just now, and then yet another. Each time, more bills of credit. And, of course, accompanying all these Bills of Credit was inflation.1

During mid-century, the English limited the ability of the American colonies to issue bills of credit, and the inflation was ended. Later in the 18th century, the American colonies chafed under the burden of this British constraint on issuing paper money. This constraint was among the grievances referred to in the Declaration of Independence. According to Benjamin Franklin, it was the primary one. And so they had a revolution.

So, in view of the inflation that burst out during the Revolution and Confederation periods, there was called a convention for the purpose of drawing up a new agreement among the states. This agreement, among other things, limited the ability of the state governments to issue paper money and did not grant such a power to the federal government. What is remarkable about the constitution that they drew up is not that it only restrained the issue of paper money for a certain number of years (until the United States got into the cycle of war, deficit spending, inflation, corruption, and decay), but that it restrained the issue of paper money for as long as it did.

So let us, with the same cruel humor, make fun of our condition as Americans the same way Aristophanes did of the condition of Athenians. Let us send a delegation to Hades to resurrect Ludwig von Mises, Thomas Jefferson, John Locke, and Aristotle to replace the corrupt, debased politicians we now have.