GET NEWS AND ARTICLES IN YOUR INBOXPrint
A
A
Home | Mises Library | Antitrust: The Case for Repeal

Antitrust: The Case for Repeal 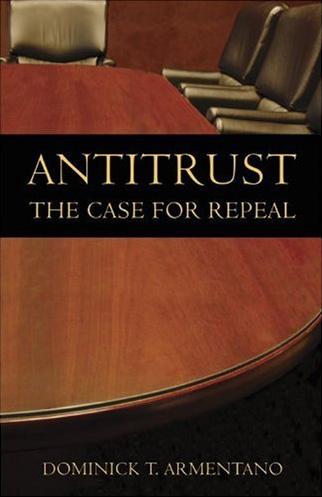 Antitrust The Case for Repeal_1.pdf

Antitrust The Case for Repeal_1.pdf

Antitrust The Case for Repeal_2.epub

Antitrust The Case for Repeal_2.epub

This 100-page tour de force rips the intellectual cover off antitrust regulation to reveal it for what it is: a bludgeon used by businesses against their competitors. Unlike some critics, Professor Armentano carries the logic of his analysis to fullest possible length:

"My position on antitrust has never been ambiguous," he writes. "All of the antitrust laws and all of the enforcement agency authority should be summarily repealed. The antitrust apparatus cannot be reformed; it must be abolished."

Professor Armentano begins with the most rigorous and revealing account of the Microsoft antitrust battle to appear in print. He further discusses other recent cases, including Toys `R' Us, Staples, and Intel, as well as many historical cases. He covers nearly every conceivable rationale for antitrust, including price fixing, tie ins, vertical and horizontal mergers, and many more.

This is a crucially important work in our new era of antitrust enforcement. This 2nd edition is newly revised (1999) and includes a new treatment of Murray Rothbard's contributions to the theory of monopoly and competition.

Finally, this is the only book in print on antitrust and the Microsoft case that calls for the repeal of all antitrust.

Dominick T. Armentano is professor emeritus in economics at the University of Hartford in Connecticut...

Warren and her fellow progressives have the regulatory issue with respect to free markets and public utilities almost...