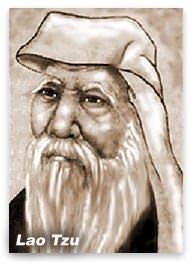 The first libertarian intellectual was Lao-tzu, the founder of Taoism. Little is known about his life, but apparently he was a personal acquaintance of Confucius in the late sixth century BC and like the latter came from the state of Sung and was descended from the lower aristocracy of the Yin dynasty.

Unlike the notable apologist for the rule of philosopher-bureaucrats, however, Lao-tzu developed a radical libertarian creed. For Lao-tzu the individual and his happiness was the key unit and goal of society. If social institutions hampered the individual's flowering and his happiness, then those institutions should be reduced or abolished altogether. To the individualist Lao-tzu, government, with its "laws and regulations more numerous than the hairs of an ox," was a vicious oppressor of the individual, and "more to be feared than fierce tigers."

Government, in sum, must be limited to the smallest possible minimum; "inaction" was the proper function of government, since only inaction can permit the individual to flourish and achieve happiness. Any intervention by government, Lao-tzu declared, would be counterproductive, and would lead to confusion and turmoil. After referring to the common experience of mankind with government, Lao-tzu came to this incisive conclusion: "The more artificial taboos and restrictions there are in the world, the more the people are impoverished…. The more that laws and regulations are given prominence, the more thieves and robbers there will be."

Lao-tzu arrived at his challenging and radical new insights in a world dominated by the power of Oriental despotism. What strategy to pursue for social change? It surely was unthinkable for Lao-tzu, with no available historical or contemporary example of libertarian social change, to set forth any optimistic strategy, let alone contemplate forming a mass movement to overthrow the State. And so Lao-tzu took the only strategic way out that seemed open to him, counseling the familiar Taoist path of withdrawal from society and the world, of retreat and inner contemplation.

I submit that while contemporary Taoists advocate retreat from the world as a matter of religious or ideological principle, it is very possible that Lao-tzu called for retreat not as a principle, but as the only strategy that in his despair seemed open to him. If it was hopeless to try to disentangle society from the oppressive coils of the State, then he perhaps assumed that the proper course was to counsel withdrawal from society and the world as the only way to escape State tyranny.

That retreat from the State was a dominant Taoist objective may be seen in the views of the great Taoist Chuang-tzu (369 BC - 286 BC) who, two centuries after Lao-tzu, pushed the master's ideas of laissez faire to their logical conclusion: individualist anarchism.

The influential Chuang-tzu, a notable stylist who wrote in allegorical parables, was a highly learned man in the state of Meng, and also descended from the old aristocracy. A minor official in his native state, Chuang-tzu's fame as a writer spread far and wide throughout China, so much so that King Wei of the Ch'u kingdom sent an emissary to Chuang bearing great gifts and urging him to become Wei's chief minister of state. Chuang-tzu's scornful rejection of the king's offer is one of the great declarations in history on the evils underlying the glittering trappings of State power; it was a fitting declaration from the man who was perhaps the world's first anarchist:

A thousand ounces of gold is indeed a great reward, and the office of chief minister is truly an elevated position. But have you, sir, not seen the sacrificial ox awaiting the sacrifices at the royal shrine of state? It is well cared for and fed for a few years, caparisoned with rich brocades, so that it will be ready to be led into the Great Temple. At that moment, even though it would gladly change places with any solitary pig, can it do so? So, quick and be off with you! Don't sully me, I would rather roam and idle about in a muddy ditch, at my own amusement, than to be put under the restraints that the ruler would impose. I will never take any official service, and thereby I will satisfy my own purposes.

Chuang-tzu reiterated and embellished Lao-tzu's devotion to laissez faire and opposition to state rule: "There has been such a thing as letting mankind alone; there has never been such a thing as governing mankind [with success]." In fact, the world simply "does not need governing; in fact it should not be governed." Chuang-tzu was also the first to work out the idea of "spontaneous order," developed particularly by Proudhon in the nineteenth and by F. A. Hayek of the Austrian School in the twentieth Century: "Good order results spontaneously when things are let alone."

Chuang-tzu, moreover, was perhaps the first theorist to see the State as a brigand writ large: "A petty thief is put in jail. A great brigand becomes a ruler of a State." Thus the only difference between State rulers and out-and-out robber chieftains is the size of their depredations. This theme of ruler-as-robber was to be repeated, independently of course, by Cicero and then by St. Augustine and other Christian thinkers in the Middle Ages.

Murray N. Rothbard (1926-1995) was dean of the Austrian School. This article is taken from the first section of "Concepts of the Role of Intellectuals in Social Change Toward Laissez Faire," The Journal of Libertarian Studies, Vol IX No. 2 (Fall 1990). You can download a PDF version of the original paper here. An earlier version of the paper was delivered at a Conference on Economics and Social Change held by the London Academic and Cultural Resources Fund and The Institute for Sociology at the University of Warsaw, at Mragowo, Poland, March 14-18, 1986.