Anatomy of the Crash 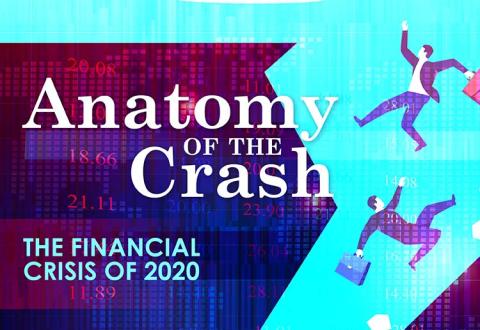 "End the Fed!" Three small words became one of the most improbable and powerful political chants in modern politics thanks to the presidential campaigns of Dr. Ron Paul. With the backdrop of a global financial crisis, the congressman from Texas was able to use the microphone of modern politics, forever changed by the internet and social media, to wake up a generation of Americans to the threat posed by central banks and fiat money. Ideological gatekeepers in Washington and the corporate press found themselves forced to recognize and attack a previously obscure school of economic thought that was now being talked about by college students, activists, and even the odd politician.

Of course, no such movements ever truly happen overnight. The seeds of the international Austrian revival were planted when Ludwig von Mises escaped World War II Europe and made a home for himself in America. With positions at New York University and the Foundation for Economic Education, Mises was able to develop a legion of followers in both academia and the public at large. Several students of his NYU seminar, such as Israel Kirzner, Hans Sennholz, and Ralph Raico, became important Austrian scholars in their own right. It was, however, Murray Rothbard who was perhaps Mises’s most significant mentee, with not only significant contributions to economics, history, and political philosophy, but popular writings aimed at energizing a grassroots Austro-libertarian movement far outside the restraints of the ivory tower.

Rothbard’s potent blend of serious scholarship and dynamic popularism became a model for the Mises Institute, which he helped found with Lew Rockwell in 1982. Since the beginning, the Institute has been both an incubator for new generations of Austrian scholars and a fount of education for the public at large.

Anyone who is familiar with the works of Mises, Rothbard, and the Austrian school understands how far removed they are from the progressive-dominated zeitgeist that has long controlled the most powerful microphones of the West. Although this carries with it the curse of limiting the influence that it could have with policymakers in government, it also means that it benefits from times when the public questions the very foundations of the institutions that it was indoctrinated to believe in.

The purpose of this collection is to highlight the important work of contemporary Austrian economists on the modern financial system. Although the mainstream financial press has been crediting American, European, and Chinese policymakers with upholding the global economy in the aftermath of 2008, Austrians have long been warning that these very same actions have only set the world up for a larger disaster. Promises in 2008 of the ease of normalizing monetary policy—such as by reducing balance sheets and phasing out market intervention—have been proven to be lies, just as Austrians warned.

While the government response to the coronavirus may serve as a catalyst for the next crisis, it is the irresponsible actions of central bankers, governments, and globalist institutions that will make the pain so much more intense. Worse still, the response will be led by individuals who are only versed in the same failed ideologies that brought us to where we are now.

The first section is a look back at major policy decisions that brought us to where we are now. One of the important aims of this collection is to highlight the truly global nature of these failings, not simply critiquing the actions of the Federal Reserve, but their colleagues at the European Central Bank, the Bank of Japan, and elsewhere. It is the coordinated attempt by central bankers around the world to try to bolster markets by hiding and mispricing underlying financial risk that has only served to escalate the fragility of the global economy.

This is followed by a look forward to what we might expect from policymakers as they are forced to respond. The combined fiscal and monetary response to the coronavirus and the government-imposed lockdown has highlighted the degree to which central bankers and modern governments feel completely unhampered by concerns about inflation or government debt. Every attempt will be made to prop up the financial bubbles they have created, and these actions will only compound the fundamental issues we face. Of course, as economic decision-makers become ever more drastic in their thought, we can expect them to resort more to using the full authoritarian powers of the modern state.

Lastly, the book looks at placing the ideas of the Austrian school within the context of the modern world.  Although questions of underlying ideology may be dismissed by “practical” individuals who pride themselves on being “independent thinkers,” Mises understood the degree to which our intellectual environment directly guides policy and institutional frameworks. In the aftermath of the challenging times that may be ahead, the only way to build a stronger, more prosperous, and more stable future will be with an ideological revolution.

I hope that you will find this collection of articles enlightening, even if the ramifications of their content mean difficulty in the short term.