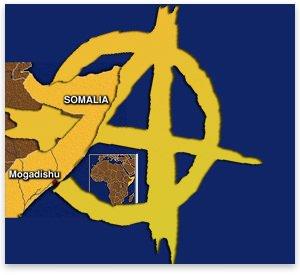 Earlier in the year, the BBC featured a series of articles commemorating the 20th anniversary of the fall of the state in Somalia. Although the articles expressed the typical revulsion at "anarchy," the series was surprisingly balanced for such a mainstream outlet. Somalia is undeniably experiencing progress according to several criteria, despite (or, some would say, because of) its lack of a strong central government.

Economists familiar with the Rothbardian tradition have taken the analysis even further, persuasively arguing that Somalia is much better without a state than it was with one. The standard statist put-down — "If you Rothbardians like anarchy so much, why don't you move to Somalia?" — misses the point. The Rothbardian doesn't claim that the absence of a state is a sufficient condition for bliss. Rather, the Rothbardian says that however prosperous and law-abiding a society is, adding an institution of organized violence and theft will only make things worse.

The BBC Reflects on 20 Years of Anarchy

As I said initially, the BBC's treatment is remarkably balanced. One article begins,

Common sense dictates that security and stability are the necessary preconditions to economic development.

Since 26 January 1991, most of Somalia has had neither, yet the economy has not only been resilient, some sectors have shown remarkable growth.

In particular, the telecommunications industry has boomed:

Somali telecoms expert Ahmed Farah says the first mobile telephone mast went up in Somalia in 1994, and now someone can make a mobile call from anywhere in the country.

There are nine networks to choose from and they offer services from texting to mobile internet access.

It's not just the telecom industry that has improved. A different article outlines the change in some major indices over the last 20 years of (relative) statelessness:

With the exception of the drop in birth rates (which is ambiguous) and the drop in access to safe water (which is clearly a bad thing), the above chart shows incredible progress on numerous fronts. I daresay that if a UN or World Bank intervention into a state-controlled African country had yielded such results, it would be trumpeted from the hilltops. (To avoid confusion: international aid groups are currently working in Somalia, and they could be partially responsible for the improvements illustrated in the chart.)

The BBC Yearns for a Perfect Government

Despite the undeniable progress, the first BBC article nonetheless laments the anarchic situation:

On the one hand, we can marvel at the fact that business does continue in Somalia, on the other hand things could be a lot better.

The lack of taxation and regulation may mean a certain amount of freedom from interference.

But business people have to pay security firms to ensure the safety of their goods, and need to pay off different factions if they want to do any trade.

The risky situation does not deter all investment, but it would be a lot higher if a stable authority was in place.

"So without a doubt, the telecom industry in Somalia needs a government."

But with the UN-backed government [which controls only a few key areas of the capital] struggling to assert its authority, it is not clear when that day will come.

Mr. Farah and the approving BBC writer here commit the Nirvana fallacy, which contrasts the flawed outcome of the market in the real world with the idealized outcome of a benevolent government in a textbook. In reality, if a single group manages to suppress its rivals and achieve domination over Somalia, businesspeople can still expect to "pay off different factions if they want to do any trade."

What is particularly amusing is the complaint that businesses currently must pay private security firms to guard their goods. Well, a government police and court system won't work for tips — they too will need to be financed, but through involuntary taxation. As with any monopoly, the government's provision of a "justice system" will be more expensive — other things being equal — than the provision through private, competing agencies.

Farah and other advocates of a central state might retort that right now security costs are particularly high for Somali businesses because of the fighting between rival factions ("warlords") in their attempt to control the government. That is true, but the observation doesn't prove what Farah thinks. Farah and other statists believe that it is inevitable that groups will vie for control, and domestic peace will only be achieved when one group (or coalition) is able to out-muscle all others and achieve overwhelming control. This is the logic by which the establishment of a government will (allegedly) lead to lower security expenses.

There are two main problems with this view. First, some have argued that the warlords fight so bitterly in Somalia precisely because meddling Westerners keep trying to impose a government. In other words, the various clans might have been willing to coexist relatively peacefully, knowing that there was a balance of power and that no one group posed much of a threat. But when the UN comes in with its money and weapons, and tries to elevate one group above the others, then the excluded Somali factions rush to attack.

The other problem with this common justification for a state — namely, that rival groups will engage in civil war until one of them achieves obvious superiority over the others — is that it proves far too much. If a balance of power can't exist among the small clans in Somalia, then how can it exist across, say, Europe, or for that matter the entire world? In other words, to be consistent, Farah and others calling for the establishment of a government in Somalia — in order to eliminate civil war — should also call for the establishment of a worldwide central government over the entire planet. Otherwise, various factions within the globe might fight each other (which of course they do all the time).

I have answered the generic "warlord objection" to anarchy elsewhere. Regarding Somalia in particular, Ben Powell et al. have done fantastic work analyzing Somalia before and after its transition to statelessness, and also comparing its fate with similar African nations. Their conclusion is that — of course — stateless Somalia is no paradise, but its lack of a corrupt, brutal government has given it an advantage over its former self and its current peers.

Somalia has achieved remarkable progress since the collapse of the brutal dictatorship of Siad Barre in 1991. If people in the more developed countries of the world wish to help the impoverished region, we can certainly send money and even visit to offer medical services and other assistance. But if the West foists the "gift" of another state on the beleaguered Somalis, their appropriate response should be, "No, you shouldn't have."