Anarchy in the Aachen 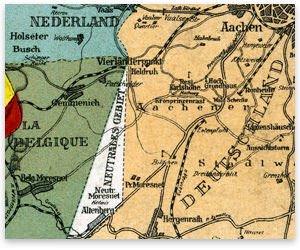 Can a community without a central government avoid descending into chaos and rampant criminality? Can its economy grow and thrive without the intervening regulatory hand of the state? Can its disputes be settled without a monopoly on legal judgments? If the strange and little-known case of the condominum of Moresnet — a wedge of disputed territory in northwestern Europe, and arguably Europe's counterpart to America's so-called Wild West — acts as our guide, we must conclude that statelessness is not only possible but beneficial to progress, carrying profound advantages over coercive bureaucracies.

The remarkable experiment that was Moresnet was an indirect consequence of the Napoleonic Wars (1803–1815), which, like all wars, empowered the governments of participating states at the expense of their populations: nationalism grew more fervent; many nations suspended specie payments indefinitely; and a new crop of destitute amputees appeared in streets all across Europe.

In the Congress of Vienna, which concluded the war, borders were redrawn according to the "balance-of-power" theory: no state should be in a position to dominate others militarily. There were some disagreements, one in particular between Prussia and the Netherlands regarding the miniscule, mineral-rich map spot known as the "old mountain" — Altenberg in German, Vieille Montagne in French — which held a large zinc mine that profitably extricated tons of ore from the ground. With a major war recently concluded, and the next nearest zinc source of any significance in England, it behooved the two powers to jointly control the operation.

They settled on an accommodation; the mountain mine would be a region of shared sovereignty. So from its inception in 1816,  the zone would fall under the aegis of several states: Prussia and the Netherlands initially, and Belgium taking the place of the Netherlands after gaining its independence in 1830. Designated "Neutral Moresnet," the small land occupied a triangular spot between these three states, its area largely covered by the quarry, some company buildings, a bank, schools, several stores, a hospital, and the roughly 50 cottages housing 256 miners and support personnel.1

The territory "originate[ed] in mistake … perpetuated by [the] jealousy [and] inability of … two governments to concur in partition," and initially, little changed within the district.2 But over the next few decades, Moresnet's small size and ambiguous oversight by several national powers came together to create an inadvertent experiment deep in the Aachen forests of northwestern Europe.

The first factor is that, although nominally monitored by several nations, by virtue of its small size, Moresnet was loosely supervised at best. Not only was it so small that a crumb would blot out its existence on most maps; neither was there much reason for its overseers to direct attention to it: it sat quietly, reliably excavating 8,500 tons of zinc each year. Occasionally a patrolling Prussian, Dutch, or Belgian soldier would wander close to the border — as a demilitarized zone, Moresnet territory was explicitly off limits for military forces — but for the most part the mining community was left alone.

And it wasn't just administrators who lost track of the of the anomalous territory; it was secluded enough that one traveler recalled inquiring

at [a nearby] hotel, at some neighboring shops, and at both of the railway stations … [but still couldn't be told] how to reach Neutral Moresnet; they had no idea at all, or guessed at random at various impossible stations.3

Within the triangle, there was a minimal government in the form of a burgomaster, assisted by a "Committee of Ten." Despite its somewhat ominous name, the committee "wield[ed] no real power" and the burgomaster was "far from being a … despot."4

Moresnet also employed a police force of one, referred to with local good humor — and perhaps mocking nearby Prussia with its General Staff and large social class of military officers — as Moresnet's "Secretary of War."5 The lone police officer was usually "to be seen in full uniform enjoying a game of chess or billiards with the burgomaster at the beer garden on the shores of the lake."6

Through the rest of the 19th century, Moresnet's course ran distinct from that of surrounding European states. In 1848, for example, violent revolutions broke out in Italy, France, Germany, Denmark, Hungary, Switzerland, Poland, Ireland, Wallachia, the Ukraine, and throughout the Habsburg Empire. For Moresnettians, life in 1848 proceeded unperturbed, and the year was noteworthy only for the first minting of sovereign coins, which local merchants accepted for use alongside other currencies.7

Despite its isolation, word slowly spread that within Moresnet — if one could find it — "imports from surrounding countries were toll free, the taxes were very low, prices were lower and wages higher than in [other European] countries."8

Over the following decades the population of the tiny region grew correspondingly: by 1850, the population had doubled, and in addition to the zinc mine, new businesses and even some small farms began to spring up.

Alongside the negligible tax burden, a unique legal climate favored the expansion of economic activity within the tiny district. On inception, the Congress of Vienna, which created Neutral Moresnet, held that its laws would be construed in accordance with the Code Napoleon, known for

its stress on clearly written and accessible law, [which] was a major step in replacing the previous patchwork of feudal laws.… Laws could be applied only if they had been duly promulgated, and only if they had been published officially (including provisions for publishing delays, given the means of communication available at the time); thus no secret laws were authorized. It [also] prohibited ex post factor laws.9

And most importantly of all, the code placed a primary importance on "property rights … [which] were made absolute," naturally generating a favorable climate for commercial enterprise.10 One periodical noted that a "thief tried … [nearby] gets … a few months, while the Code Napoleon specifies five years."11

This contrasted sharply with the Allgemeines Landrecht legal system of neighboring Prussia, which "used an incredibly casuistic and imprecise language, making it hard to properly understand and use in practice," but which for some legal purposes may have held advantages over the Code Napoleon.12 Alternately, disputes could be directed to the burgomaster's "petty tribunal" for quick decisions on smaller issues and disputes.13 His

head-quarters were … "under his hat." He went about town and held court wherever he happened to be when his service as justice was required, which, happily, was not often. When complaint was made to him, he would listen patiently and attentively … [then] whistle some favorite air, and thus take time to resolve the matter in his mind.… His judgments were always intelligible and fair, insomuch that they were never excepted to or appealed from during all his term of thirty-five years.14

Moresnet inhabitants, therefore, had access to several different systems for resolution of disputes — a rudimentary market for justice — and were therefore empowered to take their issues to the venue they felt afforded the best chances of satisfactory resolution.

Further, residents of Neutral Moresnet were not required to fulfill the compulsory military requirements of their nations of origin.15 This no doubt motivated many of the new arrivals, in particular those from Prussia, which fought half a dozen wars during the 19th century.16

The population of the hamlet quadrupled between 1850 and 1860, topping 2,000 residents. One newcomer was particularly significant. Dr. Wilhelm Molly arrived in 1863 to become the general practitioner of the mining company, and soon won celebrity by thwarting a local cholera epidemic in Moresnet. Like many physicians of his era, Dr. Molly had numerous interests, some of which would play a role in Moresnet's development over the next half-century. 17Life in Neutral Moresnet,&quot; Moresnet.nl. Taxes hadn't changed since the designation of the neutral zone in 1816, and visitors noted that Moresnet was "without the beggars who are [a] sadly familiar sight" across the rest of Europe. 19

Taxes hadn't changed since the designation of the neutral zone in 1816, and visitors noted that Moresnet was "without the beggars who are [a] sadly familiar sight" across the rest of Europe. 19

Embracing this thinly veiled antistate philosophy and having corresponded for years with prominent Esperantists around the world, in 1906, Dr. Molly met with several colleagues to discuss designating Neutral Moresnet as a self-determining global haven for Esperantists; a territory that would "embrace aims and ideals affecting the brotherhood of man … civilized life … emancipating ourselves from all that is absurd and unworthy in convention, all that the ignorant centuries have imposed upon us."30 Core to that initiative, he proposed that the name of the enclave be changed to Amikejo — Esperanto for "place of friendship" — not only espousing their explicitly peaceful nature, but undoubtedly a propagandist thumb in the eye of ever-marauding Prussia.31

Two years later, in 1908, a large celebration was held commemorating the launch of the renamed Amikejo, complete with festivities and the airing of a new national anthem.32 Unsurprisingly, the occasion went unnoted (and Amikejo unrecognized) by nearby states, although numerous newspapers reported the event.

By 1914, Amikejo's population topped 4,600 people, peacefully cohabitating in an economically prosperous political limbo characterized by an &quot;absence of definite 33 Indeed, an American — an American of the turn of the century, no less — described the establishment as having "a sort of al fresco freedom of life, an untrammelledness which comes naturally from long-continued absence of centralized restraint."35

Two inconceivably bloody years later, with the end of the war in sight, only the Contemporary Review, a British journal of politics and social reform, considered the plight of Amikejo née Moresnet:

The fate of Moresnet has been forgotten in this immense catastrophe. We must bear it in mind. After the victory the plenipotentiaries who draw up the conditions of peace must not neglect this poor little piece of independence which has been victimized.40

The cost of the Great War was unimaginably staggering, dwarfing those of previous conflicts in virtually every category: 37 million casualties, the influenza pandemic, widespread hunger, civil dislocation, economic wreckage, and more. But another, seldom-considered consequence of the war — of all wars — was, and is, the uncountable heaps of unfulfilled promises and discarded goals left in the wake of the conflagration. And with article 32 of the Treaty of Versailles — "Germany recognizes the full sovereignty of Belgium over the whole of the contested territory of Moresnet"41 — these were joined by yet another: Dr. Molly's vision.

Pete Earle is an economist at the American Institute for Economic Research and a longtime financial markets professional. He has spent nearly two decades trading in and studying global equity, derivative, commodity, and currency markets, and regularly engages in consulting with trading, cryptocurrency, and online/mobile gaming firms. Pete has published numerous articles on economic history, spontaneous order, and liberty, including A Century of Anarchy: Neutral Moresnet through the Revisionist Lens, available on Amazon and Barnes & Noble. He is also editor of Coronavirus and Economic Crisis. He resides in the Greater New York area.