Activists Seek to Impoverish Thai Villagers to Save Monkeys from "Slavery" 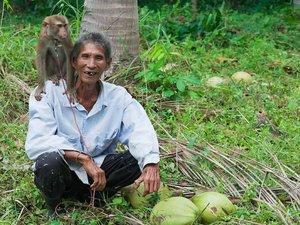 Leave it to NPR to add guilt to your pleasure. That bon-bon hidden behind your two-year-old bottle of Scotch just took on a whole new layer of sin. With child slavery in the production of chocolate and animal cruelty in the harvesting of coconuts, the conflict confection is born.

According to an animal rights group featured in a recent edition of NPR’s The Salt, abused monkeys are a key ingredient in your Panang curry. While the Thai/Malay practice of using monkeys to harvest coconuts dates back hundreds of years, landing in the crosshairs of activist vegans and SJWs (Social Justice Warriors) is a new phenomenon. Anthropologist Leslie Sponsel, quoted briefly in the NPR article, offered a defense of simian symbiosis. I caught up with Dr. Sponsel at his Hawaii home in hopes of learning more about his fieldwork. “Debate on the morality of enslaving monkeys to get a job done is a Western dilemma, not a Thai one,” Sponsel explained.

A lifelong environmentalist and author of Spiritual Ecology: A Quiet Revolution, Sponsel had reservations about watching primate pickers at work. Instead of calling for a nationwide boycott of coconut products as some have done, Sponsel did what every anthropologist worth his salt is trained to do: take pause and observe. He noted that neither his wife — a Thai Buddhist — nor a fellow Thai professor from a local university framed the practice in moral terms. Add a complete lack of compunction from the local Muslim population and Sponsel concluded that monkeys on task are not a cause, but a part of the “isness” of peninsula living.

The British explorer Robert Shelford observed in his 1916 book: A Naturalist in Borneo:

The modus operandi is as follows: — A cord is fastened round the monkey’s waist, and it is led to a coconut palm which it rapidly climbs, it then lays hold of a nut, and if the owner judges the nut to be ripe for plucking he shouts to the monkey, which then twists the nut round and round till the stalk is broken and lets it fall to the ground; if the monkey catches hold of an unripe nut, the owner tugs the cord and the monkey tries another. ... [At times] the use of the cord was dispensed with altogether, the monkey being guided by the tones and inflections of his master’s voice.

According to Sponsel, “Working macaques are the difference between a livelihood and abject poverty for many South Thailand farmers. Snake bites, stinging ants, and life-ending falls face whoever or whatever goes up those trees.”

Given the best monkeys harvest coconuts at over twenty times the speed of the most skilled man, the incentive to continue a centuries-old partnership is clear. During his fieldwork, Sponsel never observed or heard of monkey abuse by their handlers. He noted that many were treated similar to the way a Westerner treats a family pet. “For some households,” he observed, “they may even rise even to the level of being a family member.”

For a country that sees its stray dog population driven in crates to Vietnam every Tet New Year to become a side dish, the Thai macaques could have it worse. According to Sponsel, “Young ones are trained and kept on a rope or chain tethered to the handler or to a shelter when not working.” It is this practice that has earned the ire of some activists. Sponsel counters that in our society it is a matter of civility to keep a pet on a leash. And who hasn’t seen the mother who ties a string to her own children on a walk through a busy mall! According to Sponsel, the monkeys he observed were well-fed, groomed and cared for. Indeed, he often saw macaques being pushed in carts by their handlers on the way to the plantation.

“This debate is not new,” Sponsel explained. “Back in 1952, Jean Marcel Brulle’s The Murder of the Missing Link tackled our moral obligation to primates.” In an account of science fiction, a man impregnates a female monkey and then kills the newborn to force a jury to deliberate whether murder extends beyond humankind. Be it a hairy chest, or his way with the ladies (simians included), Burt Reynolds played the lead in Skullduggery — a 1970’s take on Brulle’s dilemma.

As some ramp up calls for a boycott, Sponsel cautions the bandwagon. “They should seriously consider how their campaign may negatively impact the livelihood of poor farmers. Some activists appear to be more worried about non-human animals more so than humans; even though the latter are also animals and have rights too.”

In a perfect world, Thai farmers would have machines and monkeys would have unspoiled wilderness. But, for the world we have — one in which habitat destruction wipes out entire populations — coconuts and farmers in need may be all that keeps the macaques in the trees and off the dinner tables.

David Adams is a cultural anthropologist and the president of the Institute for Global Studies (gointern.com)

David Adams is a cultural anthropologist and the president of the Institute for Global Studies...

Activists Seek to Impoverish Thai Villagers to Save Monkeys from "Slavery"

Farmers have been using monkeys to harvest coconuts in Thailand for hundreds of years. But now, animal rights...