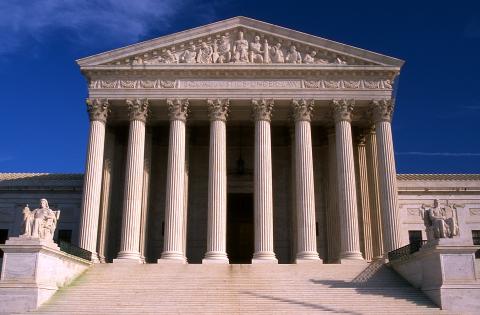 The Constitution's Fifth Amendment contains the clear language that no person should "be deprived of life, liberty, or property, without due process of law; nor shall private property be taken for public use, without just compensation."

For most people, things like highways, police stations, and courthouses come to mind as examples of "public use." And "just compensation" means what amount of cash a seller demands in exchange for his or her property.

But for local government bureaucrats around the country the Fifth Amendment has been stood on its head, with "public use" meaning any private use that generates more tax booty for city hall and "just compensation" meaning whatever the local government goons can steal the property for.

As Greenhut points out, the mention of eminent domain — the power of the state to take private property for public use upon compensating the owner — will typically be met with either bored indifference or a blind justification for the process. People "rarely doubt the legitimacy of eminent domain."

Local governments are especially adept at demonizing property owners who fight eminent domain actions, painting them as greedy obstructionists who are standing in the way of community economic progress.

Greenhut tells the stories of many heroes who fight city hall to keep their property or obtain reasonable compensation. But, most times these people fight lonely battles against town leaders and government bureaucrats while their fellow town folk are either rooting against them or ignorant as to what is happening.

Every city in America is looking for ways to generate more cash flow. Government officials attend conferences and workshops on how to creatively milk more tax money from the electorate. Eminent domain is now a strategy to improve the cash flow of a municipality. A big retail store will generate more tax revenue than a row of older homes or a church. So, declare the present use as "blight," take the property and in turn hand it to a national retailer and your cash flow problems are solved.

"They are picking economic winners and losers," Greenhut writes, "interfering with the natural process by which communities improve themselves, and doing it in the name of promoting economic development by cleaning up blight."

The definition of blight is no longer a matter of common sense but has been perverted by government officials and the courts to achieve their desired result — the taking of property. In some cases, houses that lack two-car attached garages or have yards that are too small have been called economically or functionally obsolete and thus have been considered blight — meaning the property should be razed and handed over to developers or retailers who will pay higher taxes.

Just when was it that judges took their eyes off of the property rights ball setting the stage for this tyranny? Greenhut mentions three cases with the 1954 case of Berman v. Parker doing the most damage to property rights. Berman was "a tour de force of liberal judicial reasoning," according to Greenhut: "a case that gave government carte blanche to do as it pleased with regard to eminent domain."

The case centered on the District of Columbia's Redevelopment Act of 1945, which was created to revitalize a poor section of the city. The court, as Greenhut points out, threw individual rights out the window to justify the redevelopment project.

The following from Justice William O. Douglas captures the essence of the court's decision: "The experts concluded that if the community were to be healthy, if it were not to revert again to a blighted or slum area, as though possessed of a congenital disease, the area must be planned as a whole. It was not enough, they believed, to remove existing buildings that were unsanitary or unsightly. It was important to redesign the whole area so as to eliminate the conditions that cause slums — the over-crowing of dwellings, the lack of parks, the lack of adequate streets and alleys, the absence of recreational areas, the lack of light and air, the presence of outmoded street patterns. It was believed that the piecemeal approach, the removal of individual structures that were offensive, would be only a palliative."

Greenhut cites other passages from Berman that illustrate court's totalitarian stance that would set legal precedent to pave the way for thousands of property owners to have their rights trampled upon. The most egregious being: "If those who govern the District of Columbia decide that the Nation's Capital should be beautiful as well as sanitary, there is nothing in the Fifth Amendment that stands in the way."

Increasing the tax base is what eminent domain is now all about, and the primary financial mechanism used is the Tax Increment Financing (TIF). As Greenhut explains, government redevelopment agencies first declare an area bighted and in turn the area becomes part of the city's redevelopment area. At that point, any additional property tax money generated goes to the redevelopment agency, not other areas of the government.

The theory is of course that the higher tax revenues must be used to retire the debt financing used by the city to clean up the blight and when the bonds are retired the area returns to the original tax status. But in reality redevelopment areas remain that way forever.

And its not just property taxes that these redevelopment agencies are eying: many cities get a share of the sales taxes generated. Thus, retailers and auto malls will enhance city cash flow.

In a chapter entitled "Corporate Welfare Queens" the author lists a number of examples of how people are forced to hand over property so that companies like Costco, IKEA, Wal-Mart and Home Depot can build stores where they want to. Greenhut singles out Costco as the worst offender citing numerous instances where the company was involved in eminent domain cases. "Costco is the worst of any corporation out there in the case of eminent domain abuse," John Kramer of the Institute for Justice told Greenhut.

The city of Lancaster, California attempted to use eminent domain to take a 99 Cents Only Store property and then sell it to Costco for one dollar. The owner of 99 Cents Only Stores, Dave Gold, decided to fight the condemnation with his own money. Despite the city dropping the case, Gold wanted the court to hear the case. The judge blistered the city of Lancaster, ruling "In this case, the evidence is clear beyond dispute that Lancaster's condemnation efforts rest on nothing more than the desire to achieve the naked transfer of property from one private party to another…. In short, the very reason that Lancaster decided to condemn 99 Cents' leasehold interest was to appease Costco."

Did the judge's decision make city officials see the light? Not hardly. David McEwan, Lancaster's city attorney told the Wall Street Journal: "The court has gone way beyond what the law permits. It's a troubling trend. I don't know where the courts are going with it…. 99 Cents produces less than $40,000 [a year] in sales taxes, and Costco was producing more than $400,000. You tell me which is more important."

Decisions like the one in Lancaster have been few and far between. But after Abuse of Power went to press the Michigan Supreme Court overturned its own Poletown decision and drastically restricted Detroit and Wayne County (Michigan) municipalities from seizing private land to give to other private users.

Poletown was a landmark case that along with Berman set the standard to justify land seizures. In Poletown, the court originally ruled that it was OK for the city to seize private homes and small businesses so that General Motors could build an auto factory.

In overturning the 1981 ruling, Justice Robert Young wrote; "We overturn Poletown in order to vindicate our constitution, protect the people's property rights and preserve the legitimacy of the judicial branch as the expositor, not creator, of fundamental law."

Wayne County officials expressed outrage over the decision. Robert Ficano, Wayne County Executive said "the Michigan Supreme Court's decision to change Michigan law and divest municipalities from their ability to create jobs for their citizens is a disappointment not only for Wayne County, but for all of the Michigan communities struggling to address these difficult economic times."

A professor of land use at Wayne State University called the decision a "significant blow" to revitalization efforts. "Any limitation on the power of eminent domain," John Mogk told the Detroit Free Press, "will reduce the chances of the city accomplishing those kinds of projects."

Also on a positive note, this fall the United States Supreme Court agreed to hear arguments in the case of Kelo v. City of New London, Conn. The city of New London wants to seize Susette Kelo's home, pay her market value, knock the house down and lease the property to a private developer for 99 years. No public use is argued by the city, just an increase in the tax base.

Like the Michigan court's reversal of Poletown, a Supreme Court ruling for Ms. Kelo could help turn the tide against local governments that abuse eminent domain.

As it stands now, arrogant public officials believe that cities are their own personal sandboxes to play in. Las Vegas Mayor Oscar Goodman recently described downtown redevelopment to the Las Vegas Chamber of Commerce as: "It's like playing Monopoly with real money, it's like playing Legos with real bricks and mortar. And, on occasion, you can even help your son."

Hopefully, the Supreme Court will send Mr. Goodman and his fellow mayors the message that there is still such a thing as property rights in this country.