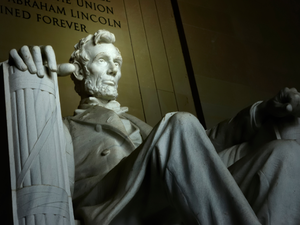 In a famous speech, delivered in Springfield in 1858, Lincoln said that “a house divided itself cannot stand.” Lincoln of course applied the sentence to the American Union, which he doubted could long endure “half slave and half free.” George Kateb has much to say about this speech of Lincoln’s in his important new book, but readers will find it difficult to avoid wondering whether the sentiment quoted applies to books as well as nations. Kateb has given us a book very much divided against itself.

The division in the book arises in this way. Kateb, a leading contemporary political theorist, strongly supports individual human rights. (His Human Dignity, published in 2011, is well worth reading on this topic.) He rightly sees American slavery as a great moral evil. With obvious revulsion, he writes: “People who thought slavery good or at least permissible did not argue that questions of abstract right and wrong were questions of locality. Rather, many of Lincoln’s opponents just did not think that elementary morality applied to dark-skinned people who were inferior by nature; ... enslavement was an appropriate response to what blacks were by nature.”

Kateb contends that some followers of Leo Strauss have not grasped what was at stake in the battle over the morality of slavery: “Thus the essence of the struggle over the rightness of slavery was not between moral absolutism and cultural relativism, the obsessive theme of some of Leo Strauss’s followers ... [Stephen A. ] Douglas’s doctrine of popular sovereignty was not a relativist idea but a racist one: he never said or came close to saying that the basic rights of white people were to be determined by either popular sovereignty or routine majority vote.” His target here is Harry Jaffa, who in Crisis of the House Divided takes Douglas to echo Thrasymachus in Plato’s Republic in his equation of justice with the interest of the stronger.

So far, so good. Again rightly, he notes that Lincoln opposed slavery. In 1864, he wrote, “If slavery is not wrong, nothing is wrong.” These correct two starting points, the evil of slavery and Lincoln’s opposition to it, lead Kateb into trouble. He would like to see Lincoln as a great moral crusader, devoted since the 1850s to the eradication of slavery in the United States. At one time, he tells us, he inclined to the view that this was Lincoln’s principal political aim, but he now is more skeptical: “I am less sympathetic than I once was to the view that from 1854, Lincoln aimed at ending slavery in the whole country, and that every move he made along the way was guided by that aim and was the only (or the most effective) move that he could make. ... However I have become persuaded that he had purposes that mattered more than ending slavery. Preserving the Union mattered more to him than ending slavery …”

Here precisely is where the trouble with the book arises. Kateb presents fully and fairly the evidence against his initial view about Lincoln. Indeed, his skeptical portrayal of Lincoln’s aims and motives is so devastating that a reader might think pages from Tom DiLorenzo’s The Real Lincoln had been pasted into the book. Despite the facts he presents, though, Kateb cannot quite let go of the old picture. The Civil War remains for him a moral crusade against slavery, with Lincoln as a veritable paladin; and, as we will see, this leads him to justify dangerous and dubious polices.

What are the facts that tell against the picture of Lincoln as a moral crusader? Lincoln was indeed opposed to slavery, but this by no means indicated that he wished blacks to have the same political rights as whites. To the contrary, he saw America as a white man’s country; and, even toward the close of the Civil War, he did not entertain much participation by blacks in American political life. “At two places in his Peoria speech he made it clear that the effect of the Northwest Ordinance of 1787 was that the territories were intended by Jefferson and others to be ‘the happy home of teeming millions of free, white, prosperous people. … ’” To a delegation of free blacks in 1862, he “calmly said that the white race suffered from the black presence — that is, from their mere presence as a physically different group of people.”

Lincoln was a convinced nationalist — he wanted a large and powerful nation as a home for white people — and if compromise with slavery would secure this purpose, he was entirely prepared to make it. For Lincoln, preservation of the Union and obedience to the national laws were a “political religion”; and transgression against this religion was sinful. “The very phrase, not only the idea of a political religion, was hence not foreign to Lincoln … the object of religious reverence was the laws, duly enacted and constitutionally valid. Citizens should feel devotion to the laws with a religious intensity. Lincoln dared to set up what genuinely religious people would call an idol, an object equated to divinity in fundamental importance, even if people continued to worship a divinity.”

Kateb also endorses a key thesis held by critics of Lincoln like DiLorenzo. During the war, Lincoln acted as a dictator. “Even before the battlefield successes of mid-1863, however, Lincoln himself had been embarked on dictatorial measures on the grounds of military necessity. He became a dictator in his dealings with some citizens. … ” As Kateb recognizes, by suspending the writ of habeas corpus, Lincoln destroyed the basis for all other legal rights. “The writ of habeas corpus was the key right that had to be suspended; it made possible the abridgement of citizens’ exercise of political rights.”

Kateb with great force notes the dangerous precedent set by Lincoln’s incursions against liberty. “Lincoln’s formulation that what is ‘otherwise unconstitutional became lawful’ becomes even more troubling the more you think about it. The process of violation becoming lawful sounds like some sort of downward transubstantiation or like a whirligig in which opposites keep turning into each other. … The underlying idea behind suspending major provisions of the Constitution must be that there are no absolute guarantees, no absolute prohibitions of any governmental action, whatever the language of the law. Any right can therefore be made to give way in exceptional circumstances, but ‘exceptional’ is what the authorities say it is.”

That is well said, but Kateb is nevertheless inclined to accept Lincoln’s measures as mostly right. If Lincoln was not the moral crusader against evil Kateb wants him to be, it remains that case for Kateb that the South deserved what it got in the war; and the violations of liberty in the North were for the most part demanded by “necessity.”

Southern intransigence brought on the war. “Secession was a war for regional independence from the nation. But of course secession was an inverted American revolution: it was meant to strengthen the institution of slavery. … ” Because the South began the war, it bears responsibility for its malign consequences.

This argument does not withstand examination. Secession did not ensure war; the war to the contrary came about because Lincoln refused to accept it. Kateb himself says that “Lincoln could not tolerate the idea that a new American polity would be founded that bordered on the United States and was devoted to slavery.” If Kateb is right about Lincoln’s attitude, does this not suggest that the initiative for war rested with Lincoln? Further, even if the South did bear primary responsibility for the onset of war, it would hardly follow that Lincoln was morally justified in doing whatever was “necessary” to secure victory.

We once more see here the divided character of this book. Kateb‘s admirable revulsion against slavery leads him to see the Southern defenders of slavery as evildoers to be extirpated. He condemns as “spurious” Lincoln’s claim in a speech in 1854 that slave owners could be “really good men.” Not for Kateb the distinction between sinners and their sin: for him, both must be hated. If Lincoln was not the moral crusader he wants, this does not detract from the fact that, in Kateb’s eyes, a war to the death against slavery was fully justifiable. We thus end with the unedifying spectacle of a firm defender of individual rights, who recognizes that “it is probable that more American men died, North and South combined, in the Civil War than in World War II,” nonetheless accepting the death and destruction of the war. Kateb is a militant secularist, but there is not a little in him of a Puritan preaching retribution. He demands that the evildoers who defended or at least condoned slavery be punished. It comes as no surprise that Lincoln’s “single greatest sentence” is, for him, “Yet if God will that it [the war] continue, until all the wealth piled up by the bond-man’s two hundred and fifty years of unrequited toil shall be sunk, and until every drop of blood drawn with the lash, shall be paid with another drawn with the sword, as was said three thousand years ago, so still it must be said, ‘the judgments of the Lord are true and righteous altogether.’”