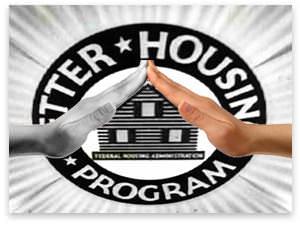 On June 28, 1934, Franklin Delano Roosevelt signed into law the National Housing Act (NHA) of 1934. Hugh Potter, president of the National Association of Real Estate Boards (NAREB) called it "the most fundamental legislation … ever enacted affecting real estate and home ownership." While federal intervention in housing had begun in 1932 under the supposedly laissez-faire Hoover, Potter's assessment was correct in the sense that the act broke new ground in terms of the range of public-private collaboration — and the unintended destructive consequences of such.

Let's get the boring housekeeping facts out of the way first: NHA 1934 created the Federal Housing Administration (FHA), which insured private lenders against losses on loans; made loans to lenders; "insured" lender mortgages meeting certain criteria (including much longer loans up to 20 years in length, periodic payments by a borrower "not in excess of his reasonable ability to pay," and interest ceilings); established national mortgage associations that purchased and sold mortgages and issued securities funding such activity; and created the Federal Savings and Loan Insurance Corporation (FSLIC), which insured savings and loan (S&L) deposits. (Recall that FSLIC — pronounced Fizz'-lick in the industry — after repeated bailouts, fizzled into insolvency for the last time before being abolished in 1989.)

The insuring of much longer mortgage loans is key here. In 1930, about 33% of American households owned their own homes and by 1990 that figure had risen to about 67%.1 The typical mortgage was 5 years in length ending in a balloon payment (principal plus interest). Even though these loans were usually renewed for another 5-year term and were a better reflection of natural scarcity, the system still drew accusations of favoring the upper middle class and the wealthy.2 The government solution, beginning with NHA 1934, was 20- and 30-year fixed-interest-rate mortgages repaid in small amounts over time to greatly boost house affordability.

This writer, who studied the private-interest dynamics of the time in graduate work, found little evidence, to his surprise, that the class-based criticism of the old mortgage system came predominately from progressives. All the evidence examined clearly revealed progressives desiring more state intervention in terms of housing for the poor, but none asserting that the only suitable dwellings for the poor and lower middle classes were detached houses and some sort of government-given right of affordability to such. (Of course today's progressives in the Obama administration and the Heather Booths of groups such as ACORN are a different matter. Some of them certainly do assert beliefs bearing some resemblance to the latter.)

these antigovernmental crusades [waged by NAREB against public housing] were hypocritical. No industry has received more help from government than the business of housing. NAREB had advocated a federally chartered mortgage discount bank in the 1920s and early 1930s and was strongly supportive of the Federal Housing Administration and other agencies which employed the resources of the federal government to underwrite the credit structure of the housing industry. To the Home Builders, FHA was indispensable. They were also firm believers in the Federal National Mortgage Administration and the VA mortgage program. While the savings and loan leagues had no use for most of these programs, they had promoted and supported the Home Loan Bank in the 1930s, and it became one of their main props.3

While the S&L leagues may not have had much use for some federal programs, the S&L industry would eventually come to be destroyed by the replacement of the 5-year mortgage with the artificial 20-year amortized mortgage, plus regulatory and tax incentives that encouraged S&Ls to load over 80% of their asset portfolios with the new longer-term mortgages.

It is amazing how long the system remained stable before calamity struck. In legend at least, from the end of World War II to about the mid-1960s, the sleepy and idyllic world of the S&L executive conformed to the rule of 3-6-3: pay your depositors 3%, earn 6% on their home loans, and be on the golf course by 3:00 p.m. Even though it was released early during this period, the 1946 movie It's a Wonderful Life and its beloved protagonist George Bailey (Jimmy Stewart), who operated an S&L in the fictional Bedford Falls, propagates this wholesome apple-pie, church-steeple, red-white-and-blue small-town narrative. While there could have been at least a little more than a grain of truth to this story, Martin Mayer reveals the part that resembles Shirley Jackson's "The Lottery":

[d]espite its lovely reputation … the old fashioned S&L was a nest of conflicting interests that squawked for sustenance from the customers' deals. On its board were the builder, the appraiser, the real estate broker, the lawyer, the title insurance company, and the casualty insurance company. (Also the accountant: One mutual S&L in Ohio that lost virtually all of its depositors' money was audited by an accountant who sat on the board, and nobody thought there was anything wrong with that.) Plus there was somebody from the dominant political party and from one of the churches. Many little mouths to feed. It is not unfair to say that nobody controlled what this board did.4

To bring a quick end to a long story, the Fed used Regulation Q (its authority to set maximum rates on time deposits given to it by the Banking Act of 1933) for the first time to lower (instead of raise) deposit rates in 1967. FDIC and FSLIC extended the rate ceiling over every institution they had jurisdiction over. Along came Henry Brown and Bruce Bent in 1971 with an innovation known as the money market fund (MMF) that was not subject to Regulation Q. Fidelity, Dreyfus, and Merrill Lynch quickly followed their example.7 Funds poured out of banks and thrifts into MMFs.

The "deregulation" wave in the 1970s began under Gerald Ford (not Jimmy Carter, as is commonly asserted) with the railroad industry in 1976. Carter was involved in enacting the first financial "deregulation," the Depository Institutions Deregulation and Monetary Control Act (DIDMCA) of 1980. The Garn-St. Germain Act was enacted in 1982 during the Reagan administration. Neither was truly deregulatory. DIDMCA raised the deposit-insurance ceiling to a whopping (at least in 1980) $100,000, increasing the moral-hazard problem. Both allowed thrifts only limited diversification of their asset portfolios. Both completely failed and in 1989 the industry was bailed out with hundreds of billions of dollars.

Back to NHA 1934. In terms of the unforeseeable and destructive effects of government regulation, it's difficult to find a better example of a time bomb: it was set in 1934 to explode in $147 billion (about $239 billion in 2008 dollars) of damage 55 years later.8 Then, to top it all off, the free market received the blame! Alan Blinder (kind of the Paul Krugman of the late 1980s) would write in his Keynesian College economics textbook that

[t]he rash of bankruptcies in the savings and loan industry in the 1980s seemed to support those who claimed that deregulation had gone too far … [as the] industry began to be populated by financial cowboys … [so that] much imprudent risk-taking and mismanagement was tolerated, and the industry was beset by an outrageous amount of fraud.9

It's a hilarious assessment, as only about 4% of the cost of the debacle resulted from private fraud (and this because state regulators left the S&Ls' vault doors open). The largest portion (29%) consisted of the state fraud of $43 billion in interest costs accrued because zombie S&Ls were kept on life support by regulators hiding their balance-sheet deficiencies with accounting gimmicks.10

On the current economy and housing debacle, Paul Krugman, writing just last May, blames everything on Garn-St. Germain, pretending as if DIDMCA and all the problems of the previous decades leading up to it never happened. This is not to defend the Republicans, who created havoc as well as the Democrats did, but to point out the holes in Krugman's "salvation through regulation" demagoguery. His portrayal of the "responsible" New Deal is laughable.

For NHA 1934 didn't just help create the S&L crater; it helped — every bit as much as the Fed and other factors — to pave the way for today's acre upon acre of half-cleared land and half-finished subdivisions, and street upon unlit street of vacant homes with for-sale signs in front of them with few prospective buyers in sight. (Environmentalists would seem to be natural enemies of the true cause of miles upon miles of ugly suburban sprawl, yet they overwhelmingly fix the blame on the "greed of the free market.")

While the establishment Left is certainly horrible on the issue of housing, the Right has its own shameful legacy as well. In 1943, the National Resources Planning Board had already been anticipating the end of the war and drawing up extensive plans that were so ambitious for socializing US housing markets that they were practically communist. So alarming were the board's plans that the House of Representatives ended its funding for fiscal year 1944. Little better over the long run was the board's de facto successor, the Senate Subcommittee on Housing and Urban Redevelopment, led by Senator Robert Taft of Ohio.

Taft declared that housing was an exception to laissez-faire and that restoration of urban areas was impossible without federal intervention. This represented a huge victory for advocates of government intervention since it blurred ideological differences on the issue of government involvement in housing markets. Out of Taft's committee came many ideas that were eventually implemented in the Housing Act of 1949.11 (Bewilderingly, Taft still seems to be included in the history of notable free-market politicians. Yet it would seem unthinkable for Ron Paul to participate in anything close to what Taft did.)

The current housing debacle wasn't caused by "eight years of cowboy capitalism ushered in by George W. Bush" and there was never any real deregulation of any sort at any time. It was a project created over three-quarters of a century by fascists from both parties.