GET NEWS AND ARTICLES IN YOUR INBOXPrint
A
A
Home | Wire | Why Aren't Female Soccer Players Paid More?

The Daily Show has recently been waging an ideological campaign in the pursuit of raising compensation for female soccer players. It turns out that the women's teams aren't paid as much as the men's teams.

The Daily Show's key piece of "evidence," a chart showing comparative compensation rates, has been making the rounds in social media today: 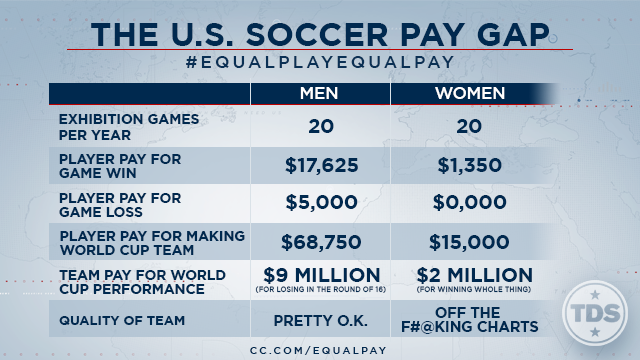 The thought of looking up information on professional soccer salaries puts me to sleep, so I'm just going to assume these numbers are true and proceed with the economic argument.

The core argument being made by the economists at Comedy Central is that the women's team has more "value" than the men's team because the women's team wins more games, and that being a soccer player is strenuous whether or not one is a man or a woman. Again, I'm just going to assume the assertions about win totals and strenuousness are true since I don't know any of the five people who watch American soccer teams.

But, anyone who understands how professional sports franchises are valued can see immediately why the argument made by The Daily Show fails.

Professional sports teams are not at all valued based upon how many wins or losses they have, and they're certainly not based on how many games people play, or how strenuous the sport is. They are valued based on how much revenue the teams create in terms of advertising, licensing, ticket sales, and other sources of revenue. Unless women's soccer is unlike every other major professional sport, it's a safe bet that generally speaking, men's soccer produces far more revenue for the owners than women's soccer. Thus, the men are paid far more because they have higher worker productivity. That is, each player is worth more as an asset to the owner than are the women players.

If Comedy Central thinks women should be paid more, they need to convince the consumers that it's more fun to watch women's soccer.

Now to a certain extent, CC is attempting to do that by constantly reiterating that the women's team apparently wins a lot of games. However, the value a consumer places in a sports team is not simply a function of a win-loss record. Many losing professional teams produce revenue in spite of being "bad" teams, from a win-loss point of view.

The owners of the Colorado Rockies baseball team, for example, are apparently perfectly happy with owning a team that could be best described as "a top notch AAA team." After last season's abysmal win-loss record, the owners made no significant changes to management or anything else. Why should they?  People keep going to games and buying licensed gear for reasons other than the win-loss record of the team.

The same holds true about value at the other end of the spectrum. The Los Angeles Dodgers are the highest paid team in baseball. This isn't because they have such a stellar win-loss record — the team tends to barely break .500. The players are paid so much because the Dodgers aren't primarily a baseball team. As explored in the book The Best Team Money Can Buy,  the owners of the Dodgers recognize that the team is primarily a media empire. Whether or not the team wins the World Series every year is largely irrelevant. The team only has to attract fans, and thus revenue, for its media and licensing business. That can be helped along by maintaining a decent win-loss record, but that's by no means the only important factor.

So, if soccer is like every other major professional sport, the key to getting high compensation for female athletes is to convince large numbers of consumers to decide the women are entertaining to watch and follow off the field. That may or may not be possible, but simply telling people that some women's soccer team wins a lot of games doesn't make it more valuable. People have to actually like watching the games based on their own complex and subjective valuations.

Yes, it's true that there are a lot of sad, aging former athletes in the world who think that winning a competition in a child's playtime activity necessarily deserves great economic rewards. It doesn't. Professional athletes are nothing more than entertainers and performers, and if the consumers don't find what they do to be entertaining or emotionally engaging, then the performers will have a hard time being paid much to do their thing. The alleged entertainers at Comedy Central seem to not be able to grasp this.

William L. Anderson is a professor emeritus of economics at Frostburg State University in Frostburg, Maryland. He...