Three quarters of a century ago, on June 22, 1941, Nazi Germany launched Operation Barbarossa, an attack on the Soviet Union across a front 3,000 miles long. Barbarossa moved the war into its global stage. It prefigured the final alliance system. It moved the Final Solution to the industrial level of killing. It helped bring the United States into the war, and certainly opened the floodgates of "pre-Lend-Lease" from the United States to Stalin's Russia. As Ralph Raico has pointed out, the presidential powers inherent in Lend-Lease amounted to one of the great expansions of power in American history. On this aspect, see Raico's review essay on Justus Doenecke's Storm on the Horizon, as well as Raico's rethinking of FDR, in which addresses the character of Hopkins.

But apart from Raico, Doenecke, and other historians in the libertarian and Old Right revisionist tradition, and in spite of the enormous impact this single event has had on world history, what a bundle of historical misinformation and misunderstandings surround it! In essence, two totalitarians agreed to divide Europe. After nearly two years of relatively close cooperation in invasion, mass killing, deportations, and forced labor, the two great apostles of the state parted ways, largely because their long range territorial, strategic, and economic plans were mutually exclusive. They were both still totalitarians, both still mass murderers. 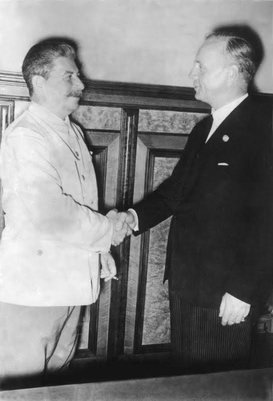 Yet this whole issue of Hitler and Stalin as two roads to the same total state had to wait, really, until the 1980s and early 1990s before any hint of historical comparisons reached the mainstream, meaning college textbooks, academe, popular history, etc. Even all those years later, even when specialists among mainstream historians knew very well that the research on Stalin portrayed a horrifying record, treatment of the Man of Steel in textbooks, in the news media almost always pulled punches.

The amazing thing is that during the Cold War, educated Americans could hold both images in their minds: "Uncle Joe" on the one hand, and the evil Cold War Stalin on the other. A truly Orwellian feat.

But then this, too, can be explained easily. For one thing, the Third Reich was the real thing: a totalitarian state and murderous regime. Indeed, with all the commonly discussed knowledge about Hitler and his regime, it seems hard for the public mind to comprehend two such villains. So there is a built-in psychological aspect to the modern recognition of Hitler as the devil. Hitler may have been Satan, but Stalin was... well... "Uncle Joe" with some human faults.

And on the other hand, another part of the explanation reaches farther back. In the thirties, the FDR White House and much of the American press in essence had ignored Stalin's mass murder, concentration camps, and ethnic cleansing. Americans who read their newspapers saw much about the evils of Hitler and little about the evils of Stalin in the thirties (Stalin was Time Magazine's Man of the Year in 1940). But in 1941 Stalin suddenly became — at least in outward appearance — the darling of the administration and much of the American press. "Uncle Joe" became something like a cult hero. The Golden Gate Jubilee Quartet, a popular black gospel quartet, had a moderate hit in 1943 with a song featuring Stalin in quasi-Biblical terms ("Stalin wasn't Stallin'" by Willie Johnson).

Hence, in popular culture, Stalin (who died with a plan "in his pocket" for going after Jews in the Soviet Union) was somehow in a completely different category.

Operation Barbarossa has many meanings for the modern world. It took a terrible toll in human life, on the battlefield and off. It set up the aggrandizement of the Soviet Union itself. In the United States, it gave new meaning to "wartime emergency," helped supersize US presidential powers, allowed the regime to steer the country into war in league with the new enemy of Hitler, and much more.

A lot of impact for one event. Seventy-five years ago.

Why They Want To Keep the "Health Emergency" Going Forever

Who Needs Personal Responsibility When We Can Just Trust Our Overlords?

Across so many fields, from money to nutrition, I’ve found that the corollary to the government-heavy approach is a desire not to make choices for oneself.

The Great Reset, comes straight from the socialist witch’s kitchen and represents a reissue of well-known socialist ideas in a new guise.