GET NEWS AND ARTICLES IN YOUR INBOXPrint
A
A
Home | Wire | What Will Trump Do About the Central-Bank Cartel?

What Will Trump Do About the Central-Bank Cartel?

The US is by far the biggest economy in the world. Its financial markets — be it equity, bonds or derivatives markets — are the largest and most liquid. The Greenback is the most important transaction currency. Many currencies in the world — be it the euro, the Chinese renminbi, the British pound or the Swiss franc — have actually been built upon the US dollar.

The world is effectively on a US-dollar-standard, and the US Federal Reserve (Fed) has risen to the unofficial status of the world’s central bank. The rise of the Greenback has to a large extent been propelled by international banking, which has basically “dollarized” in terms of its lending and issuing activities.

The Fed’s policy not only determines credit and liquidity conditions in the US, but does so in many financial markets around the world as well. For instance, movements of long-term US interest rates regularly have effects on credit and equity markets in, say, Europe and Asia. The Fed’s actions are the blueprint for monetary policymaking in many countries around the world.

The graph shows the Fed’s supply of newly created US dollar liquidity sent to other central banks around the world. It also shows the so-called “euro cross currency basis swap,” which can be interpreted as a “stress indicator”: If it drops into negative territory, it means that euro banks find it increasingly difficult to obtain US dollar credit in the free market place. The Fed’s injection of new US dollar balances into the financial system has helped to reduce the euro currency basis swap. Since late 2016, however, it has started to venture again into negative territory — potentially signaling that euro banks are again heading for trouble. 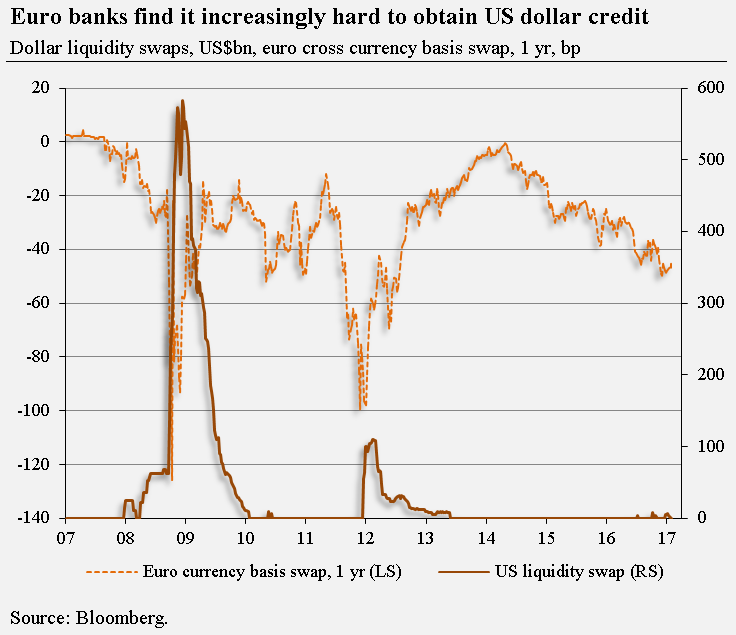 The financial and economic crisis 2008/2009 has increased further the dependency of the world’s financial system on the US dollar. As early as December 2008, the Fed provided so called “liquidity swap agreements.” Under the latter the Fed is prepared to lend newly created US dollars to other central banks around the globe.

For instance, the European Central Bank (ECB) can obtain US dollars from the Fed and lend the funds on to shaky domestic banks in need for US dollar funding. In other words: Liquidity swap agreements can easily replace foreign currency funding in the market place by foreign currency credit provided by central banks.

It is no wonder, therefore, that credit default concerns in financial markets have declined substantially. Investors feel assured that big banks won’t default on their foreign currency liabilities — as such a credit event is considered politically undesirable, and central banks can simply avoid it by printing up new money.

Moving Toward a Worldwide Central Bank

The close cooperation and coordination among central banks under the Fed’s tutelage amounts to an international cartelization of central banking — paving the way toward a single world monetary policy run by a yet to be determined single world central bank. Such a development is, or course, in the very interest of those in favor of establishing a single world government.

How will President Donald J. Trump and his administration deal with the cartelization in central banking? Mr. Trump doesn’t seem to be an “internationalist,” seeking to build a new world order by political and military means. If that is so, he will sooner or later have to come to grips with the Fed’s policies — most notably with its liquidity swap agreements.

The Fed’s policy has made the world’s financial system addicted to ever greater amounts of US dollars, easily accessible and provided at fairly low interest rates. From this the US banks benefit greatly, while average Americans bear the brunt: they pay the price in terms of, for instance, boom and bust and an erosion of the purchasing power of the US dollar.

What Trump Should Do

If the Trump administration really wishes to live up to its campaign promise “Make America great again,” there is no way of getting around addressing Fed policy. A first step in that direction is the idea to subject the US central bank to public scrutiny (“Audit the Fed”), bringing to public attention the scope of the Fed’s interventions into the world’s banking system.

Of course, the liquidity swap agreements in particular can be expected to be heavily defended by central bankers, bank representatives, big business lobbyists, and mainstream economists as being indispensable for financial system stability. And for sure, a sudden withdrawal from this practice would almost certainly deal a heavy blow to financial markets.

If push comes to shove, it could even make the worldwide credit pyramid, built on fiat money, come crashing down. However, the really important argument in this context is that the continuation of the practice of central bank cartelization will eventually result in a despotic regime: and that is a single world fiat currency regime.

Of course, change for the better doesn’t come from politics. It comes from better ideas. For it is ideas that determine human action. Whatever these ideas are and wherever they come from: They make humans act. For this reason the great Austrian economist Ludwig von Mises (1881 – 1973) advocates the idea of the “sound money principle”:

The sound-money principle has two aspects. It is affirmative in approving the market's choice of a commonly used medium of exchange. It is negative in obstructing the government's propensity to meddle with the currency system.1

Mises also explains convincingly the importance of the sound money principle for each and every one of us:

It is impossible to grasp the meaning of the idea of sound money if one does not realize that it was devised as an instrument for the protection of civil liberties against despotic inroads on the part of governments. Ideologically it belongs in the same class with political constitutions and bills of right.

Mises’s sound money principle calls for ending central banking once and for all and opening up a free market in money. Having brought to a halt political globalism for now, the new US administration has now also a once in a lifetime chance to make the world great again — simply by ending the state’s monopoly of money production.

If the US would move in that direction — ending legal tender laws and giving the freedom to the American people to use, say, gold, silver, or bitcoin as their preferred media of exchange — the rest of the world would most likely have to follow the example. That said, Mr. Trump could really make a real change, simply by embracing Mises’s sound money principle.