Rothbard’s Depression Analysis Is Now More Relevant than Ever

Yet there are many barriers still in place against sound economics. Neither the Austrians nor the monetarists or even neoclassical economists can successfully compete with the attractiveness of Keynesianism for policymakers. Chicago economists and even Austrians may win the Nobel prizes, but all kinds of hyphen-Keynesians (such as new-, neo-, and even post-Keynesians) get positions as presidential advisors, as secretaries of the treasury, and as central bankers by selling their snake oil and practicing as quack doctors.

It is probably no exaggeration to say that a large part of our current economic misery is due to economic policymaking stuck in a primitive state. Things have actually deteriorated since the 1960s, as vulgar forms of Keynesianism dominate policymaking. Beyond more government spending and more monetary expansion, there is little else in their toolkits. Due to this type of macroeconomic policy, public debt has reached unsustainable heights, central banks’ balance sheets have exploded, interest rates have reached zero or fallen below, yet the economy has remained weak and no strong recovery is in sight.

It is high time to turn to Rothbard in the search for advice. His recipe for dealing with depressions and how to avoid turning a recession into a depression is of timeless relevance.

Rothbard on the Great Depression

Rothbard has shown that policymakers have done all the wrong things before and during the Great Depression. According to Rothbard, in order to avoid that a recession should turn into a depression, one must not:

The basic recipe of Rothbard is laissez-faire, both in order to fight and to avoid a depression. In positive terms, one can highlight three steps as to what policymakers should do when a severe recession is on its way. These policy suggestions are:

In the theoretical part of America’s Great Depression, Rothbard presents a comprehensive exposition of the theory behind these recommendations. Yet, nowadays as in earlier times, the list provokes not just rejection, but outright disdain in a policy debate. The Rothbardian approach still faces harsh disparagement and outright scorn.

But Rothbard’s analysis is as relevant and essential as ever. To show this, I have developed the GSMS-SS model, which makes ample use of classical and neoclassical topics, such as the equation of exchange and the neoclassical growth model, in order to construct an analytical framework for the Austrian business cycle theory. The purpose of this exercise is threefold: First, I want to provide argumentative tools for the Austrians in the macroeconomic policy debate; second, with this model, I wish to contribute to the teaching of macroeconomics; and third, with the help of the first two steps, I hope to make a contribution to reforming the way business cycle policy is being done.

The GSMS (Goods Side/Money Side) model provides a graphical representation of the equation of exchange. It is derived from one of the earliest economic models. It goes back to Copernicus who used the relation between money in circulation and the price level in a memorandum on currency reform for the Prussian Diet in 1517.

In its modern version, developed by Irving Fisher, the equation states the identity of money (M) and its velocity of circulation (V) on the one side and of the real national product (Q) and the price level on the other side. Defining money multiplied by its velocity as “macroeconomic liquidity” (ML), the price level (P) is given by the fraction between ML and Q.

When macroeconomic liquidity (ML) is fixed, the price level (P) and the product (Q) show an inverse relationship, which graphically shows up as a hyperbola. Given that macroeconomic liquidity is analytically equivalent to the product (Q) multiplied by the price level (P), ML is equal to national income (Y) which, in Keynesian terms, is equal to aggregate demand. Comparing the GSMS-SS model with the conventional ISLM-AS approach as it is used not only in the classroom but also by policymakers, it becomes clear that the aggregate demand and supply model suffers from two grave errors, both of which result from its Keynesian roots. First, the GSMS-SS model shows that the aggregate demand curve is not a behavioral function, but an analytical relationship. Second, aggregate demand doesn't need to affect real output (Q) but goes fully into a higher price level. Likewise, real output can expand or shrink while the nominal value of aggregate demand will remain constant.

In a second step, we combine this model with the standard neoclassical growth model of Solow and Swan to form the GSMS-SS model (see figure 1). For this purpose, the horizontal line in both parts of the graph represents capital per capita (k). With the help of this model, we can analytically demonstrate the central arguments of Rothbard. 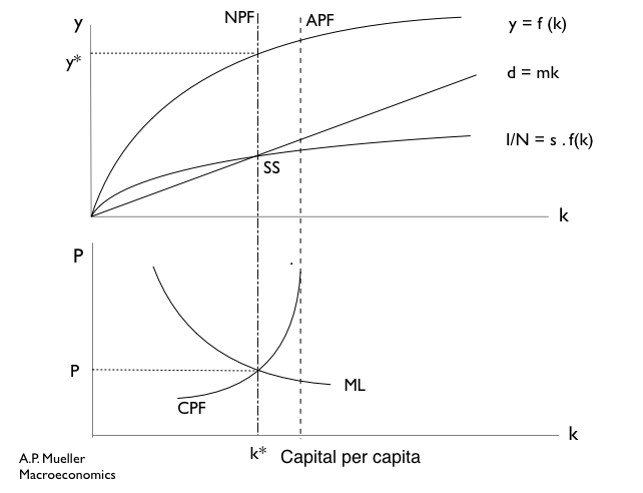 The business cycle begins with a monetary expansion that moves the ML-curve to the right. At this stage, higher aggregate demand expands production and likewise capital accumulation (k). Technological progress may allow that price increases remain moderate (as the CPF curve would move downward) and the production function that relates income per capita (y) to capital per capita (k) would shift upward. In the absence of sufficiently strong technological progress, however, that could compensate the demand expansion, an on-going policy of augmenting aggregate demand, by fiscal or monetary policy or their combination, moves the economy beyond its natural output level (NPF) and its steady state (SS) growth equilibrium (figure 2). 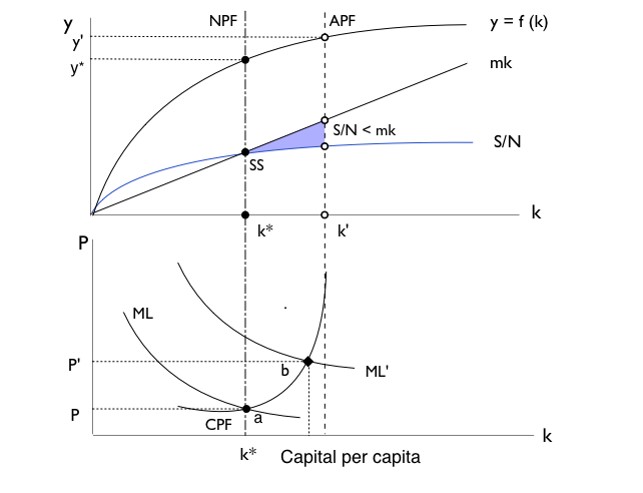 In the upper part of the graph, a discrepancy shows up between the costs of capital maintenance (mk) and savings per capita (S/N). In full accordance with the findings of the standard neoclassical growth theory, a savings hiatus emerges, or, as Ludwig von Mises had characterized this situation, the economy is not yet rich enough to maintain the enhanced capital structure:

The whole entrepreneurial class is, as it were, in the position of a master builder whose task it is to erect a building out of a limited supply of building materials. If this man overestimates the quantity of the available supply, he drafts a plan for the execution of which the means at his disposal are not sufficient. He oversizes the groundwork and the foundations and only discovers later in the progress of the construction that he lacks the material needed for the completion of the structure. It is obvious that our master builder's fault was not overinvestment, but an inappropriate employment of the means at his disposal.

As Rothbard points out, the economy needs to generate more savings in the recession, not fewer savings. If savings are insufficient, the economy must shed a part of its capital structure and liquidate assets. In terms of the model, the economy must shrink toward the equilibrium of the steady state (SS). For the economy to move toward its sustainable equilibrium, deflation is required and any tentative steps to reflate the economy by “pushing on the string” of the money supply with zero bound or negative interest rates will prove futile at best. In as much as monetary policy tries to reflate the economy, the more grows the risk of a massive deflationary depression. More malinvestments happen and the banks accumulate more bad debts. When these failed investments are no longer sustainable, the money supply will collapse and the macroeconomic liquidity will shrink, further accelerated by the reduction of the velocity of circulation. The recession turns into a deflationary depression (figure 3). 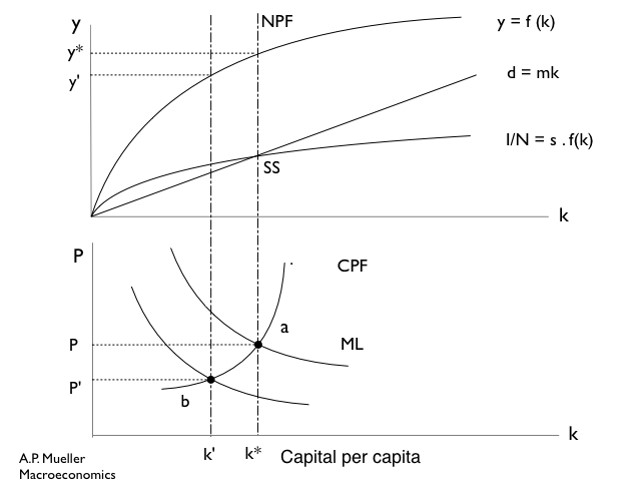 As Rothbard concludes, the “most important canon of sound government policy in a depression … is to keep itself from interfering in the adjustment process.” The government can only help positively if it lowers “its relative role in the economy, slashing its own expenditures and taxes, particularly taxes that interfere with saving and investment. Reducing its tax-spending level will automatically shift the societal saving-investment–consumption ratio in favor of saving and investment, thus greatly lowering the time required for returning to a prosperous economy.”

In as much as the present model is analytically and logically sound, a serious policy debate should convincingly reject all types of expansive policy measures. What is needed in the face of an economic downturn is not more, but less government spending and not more, but less monetary and interest rate stimuli. The next economic downturn should offer many opportunities to come forth forcefully with the Austrian position in the debate. For this purpose, the present model should offer an expedient instrument.

Dr. Antony P. Mueller is a German professor of economics who currently teaches in Brazil....

Trying to interpret the actions of Vladimir Putin or politics in Russia using Western narratives is likely to end in...

Money velocity's role in forcing up prices is misunderstood because today's monetary "authorities" fail to consider...