A Reality Check on Defense Spending

Time reports that Rand Paul has come out in favor of a sizable boost to defense spending,

Paul, positioning himself for a run in the presidential primaries, is echoing his fellow republicans who seem to be under the impression that defense spending is an endangered species in Washington, DC.

In fact, in January, the always-hawkish Heritage foundation proposed new increases to the defense budget and claimed that “the state of the U.S. military continues to degrade due to recent spending decisions. The several years of uncertainty in the defense budget, the unprioritized cuts, and the magnitude and pace of the reductions have led to a weaker and smaller force today.”

Any serious look at defense spending, however, reveals that spending is basically on a par with spending levels (in real terms) seen during the height of the Vietnam War and during the Reagan military buildup. To claim that defense spending now is experiencing cuts of a large magnitude is disingenuous and requires quite a few splitting of hairs to come up with the number necessary to make the case.

First, let’s look at the basic historical situation in defense spending. The first graph shows defense spending in constant 2005 dollars (in other words, it’s inflation-adjusted). We see that in real terms, defense spending in recent years has been well above  the sort of spending Ronald Reagan thought adequate to deal with the Soviet Union.

If the defense levels we’re now experiencing are insufficient for defense against groups like ISIS which has no navy, no ICBMs, and no air force, one has to wonder: why was Ronald Reagan such an irresponsible peacenik? He signed off on funding levels well below what were peak levels back in 2010.

The truth is, US defense spending is nowhere near being at historic lows, nor is it subject anything resembling draconian or dramatic cuts to the budget. Keep in mind also, that the numbers in the first graph show only what is considered “National Defense” under so-called “function number 050.” That means these numbers here exclude VA spending and Homeland Security spending, both of which should, if honesty matters, be included in any discussion about national defense. VA spending is a cost built into defense spending, and Homeland Security is nothing more than “defense” operations in domestic settings. The purpose of it is the same. This category also excludes the money spent on foreign aid and on embassies and other “international affairs” functions.

So, if anything, this numbers in graph 1 are low-ball numbers.

In fact, if we take a look at the combined total of DHS, DoD, and VA spending, we find that as of 2014 — a period of military “decline” according to the Heritage Foundation — that military spending was up 50 percent from 2004 to 2014. Now, the second chart is not adjusted for inflation, so if we go in and check the CPI numbers, we find that the rate of growth was twice that of the CPI. In other words, true defense spending, including all the relevant agencies, increased by twice the inflation rate from 2004 to 2014. And, if we look at growth from 2004 to 2010, a year before all those draconian cuts Heritage says we have, then we find that over that period, defense spending increased 60 percent, or three times the inflation rate over that period. In nominal terms, defense spending, including VA, and DHS has ranged from $700 to $850 billion since 2008. Conservative politicians would have us believe that the military has somehow been gutted since then, but the numbers hardly show this. Military spending is alive and well, and will soon be raking in over a trillion dollars per year if the hawks in Congress get their way. 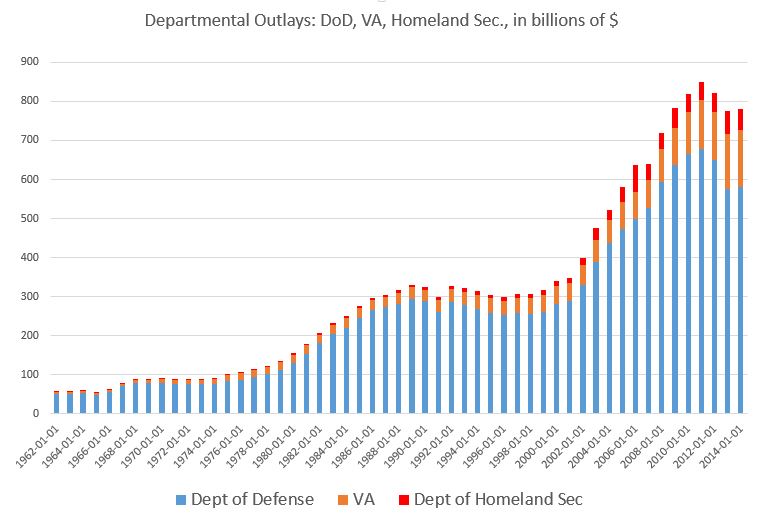 Moreover, the Heritage Foundation’s January report claims that defense spending has been cut by 31 percent, but this is an absurd number by our metric. Heritage has simply decided that 2010, the peak year, is obviously the "correct" amount of military spending because it is the highest amount ever. Thus, any decline from that peak amount counts as some sort of drastic cut. Meanwhile, back on planet earth, we look at these numbers in a much larger context. We must ask ourselves how much spending has increased over the past decade. But even if we adopt Heritage's method of counting defense spending since the magical year of 2010, we find that totals have been cut by only 8 percent, not the 31 percent that Heritage claims. Heritage gets away with this by conveniently excluding those VA and DHS numbers. But if we take a more honest view of defense spending growth over time, we find that spending totals are up considerably, and the inclusion of VA and DHS numbers are indeed significant since VA and DHS spending increased by more than 100 percent during the period.

On the other hand, I could remove VA and DHS spending and still come up with a 33 percent increase from 2004 to 2014, which also outpaces the 25 percent total inflation over the same period. Any way we look at it, defense spending is up and has outpaced inflation over the past decade, and in real terms, it remains at Reagan-Cold-War levels.

The national security state is in no danger whatsoever of being de-funded any time soon.

[1] Politico reports that the Paul proposal, which included cuts elsewhere in the budget to offset the increase in defense spending, was an alternative to a Rubio/Cruz proposal to make similar funding increases without any corresponding cuts.