The Privilege of Politics

Actor Chris Pratt finds himself a target of left Hollywood and various social media enforcers for his apparent lack of support for Joe Biden, a sin in his industry. Pratt has endorsed neither Biden nor Trump, which seems eminently sensible for a boy-next-door type who plays superheroes and adventurers in big blockbusters. But staying quiet is never enough for the political jackals, who insist silence is violence and a form of privilege. Trump is a Nazi; his electorate is full of hateful fascist enablers and this is no time for quietude. To make matters worse, the reticent Pratt also belongs to a Christian church which is "anti-LGBT"—which is to say not anti-LGBT at all, but simply not in full conformity with the language and demands of its accusers.

When his actor friend and sometime costar Mark Ruffalo rushed to defend Pratt's character, the Twitterati reacted angrily but predictably: 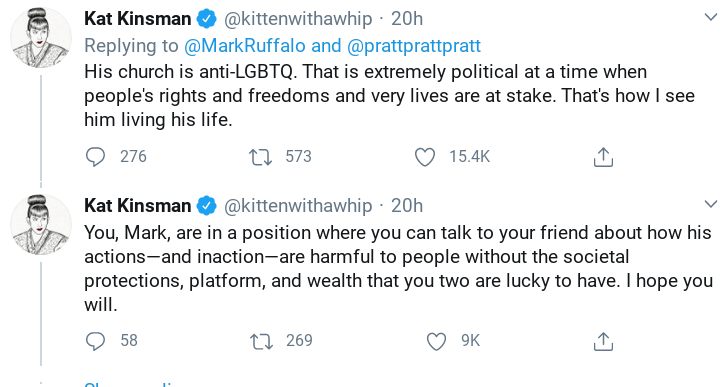 This is a classic case of the Imposers positioning themselves as the Imposed Upon: LGBT advocates weaponize and contort simple words—hurt, harm, apathy, privilege, marginalized, vulnerable—in ways reminiscent of Orwell's "Politics and the English Language." They use words in consciously dishonest ways. They shift the parameters of what it means to "support" or "oppose" LGBT causes into a stark binary: you are for us or against us. Simply living one's life peaceably is not an option in this bizarre worldview.

And the Imposer's unconditional terms change constantly, seemingly overnight. One cannot avoid conflict by being "not overtly political," as Ruffalo termed Pratt. The accusations against his church, for example, amount to nothing more than a demand for unconditional surrender of any theology or doctrine which does not comport with today's instant (though far from universal) view of transgenderism. Unless and until that happens, his church is per se transphobic and evil: indifference, or even kind and loving disagreement, cannot satisfy the Imposers.

It does not matter whether Pratt's church welcomes everyone, even those individuals it considers engaged in sin (which presumably includes just about every person on earth). It does not matter whether Pratt is a good person or friend to his fellow actors. His church must affirmatively endorse the views of LGBT activists; Pratt must actively endorse Biden. Anything else is weaponized privilege.

Of course this is nonsense, but the Imposers always claim to be the Imposed Upon. Media and politicians play along, and then social media voices join the chorus until the original reality becomes completely obscured: both Chris Pratt and his church were minding their own business and not hurting anyone. The Biden and LGBT activists came looking for them, not the other way around.

What incredible arrogance and hubris! This is real privilege: the privilege of demanding others not only share your political views but also see the world in starkly political terms. This is real hate, actual hate, not the phony kind imagined on Hate Has No Home Here yard signs.

When taken to an extreme, a positive rights worldview requires not only conformity and acquiescence with the political project of the day, but your affirmative participation. Not keeping up with the latest outrage, political machinations, or campaign—not leading a wholly political life—becomes a dereliction of duty.

Political liberty is quite simple, but not easy. We all owe our fellow citizens a duty not to aggress against them or their property, and not to commit fraud against them. In the broader societal sense, we all should strive to be kind, open, and generous with everyone we meet, unless and until they give us a reason to be otherwise. But that is all we owe. Being apolitical or even antipolitical is your absolute right. At best, politics is an uneasy and imperfect mechanism for peacefully transferring political power; at worst, it is barely a substitute for war. More commonly, politics is a turf battle waged by rival gangs to control the state apparatus (the turf is us and our money). Politics is not noble, virtuous, or even necessary. The people attacking Chris Pratt, and even hoping to harm his career, reputation, and finances, hold no moral high ground.

My great aunt, now departed, once told me about a decision she and her husband made as newlyweds just after World War II. Starting life together in a very modest house, they wanted to build lasting memories with family and friends. So they made a pact: they would never discuss politics in their home or allow guests to discuss politics. In her view politics was like sex and religion, a private matter. They wanted to avoid the disharmony and rancor they had witnessed among their own parents and families a decade earlier over the Roosevelt administration's New Deal programs. They determined their hearth and home would be devoted to happiness, an apolitical refuge where every visitor would be welcome.

The goal is a less political world, not a world which bends to our political will. We are not Imposers. So participate in politics and voting if you like, or refrain if you like. Voting is optional and anonymous for a reason. But never let anyone force you into taking a political stance, or even to hold a political stance. In 2020, privilege manifests as political extortion. Push back against these bullies.